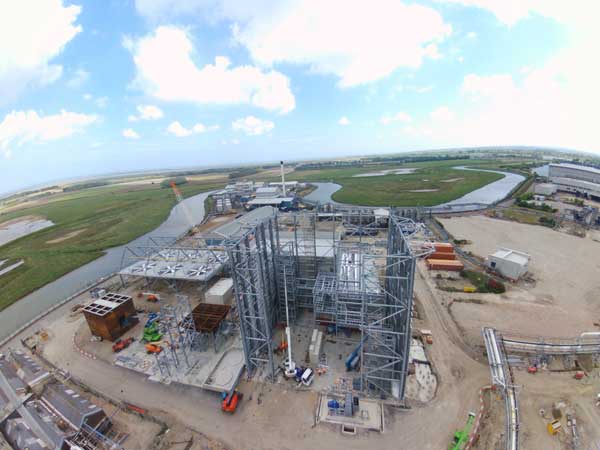 The final steel elements are being erected for the UK’s latest renewable energy facility currently under construction in Sandwich, Kent.

Known as the Kent Renewable Energy plant, this facility will have a capacity of 27.8MW and will be fired primarily with woodchip sourced locally in the UK.

The entire biomass fuel required for this plant will be sourced under a long-term contract with Euroforest, one of the largest virgin wood suppliers in the UK. It is claimed the plant will deliver CO2 savings of approximately 100,000 tonnes every year.

It is also claimed that the plant will be able to produce energy corresponding to the power consumption of 50,000 households. Heat and some of the power will be delivered to Discovery Park, which is one of the UK’s leading science parks, with the remainder going to the National Grid.

A number of large steel-framed buildings have been erected to accommodate the main processing stages.

“Steel is the most efficient way of designing this sort of energy centre as it allows the flexibility to construct the required tall buildings quickly and economically,” explains BWSC Lead Engineer Agust Asgrimsson.

“Much of the project’s steelwork was designed to include temporary works, so that it could be partially erected around our installation programmes,

“The boiler hall for instance was initially erected without one façade and its roof so the boiler could be lifted into place during a break in the steel erection process.”