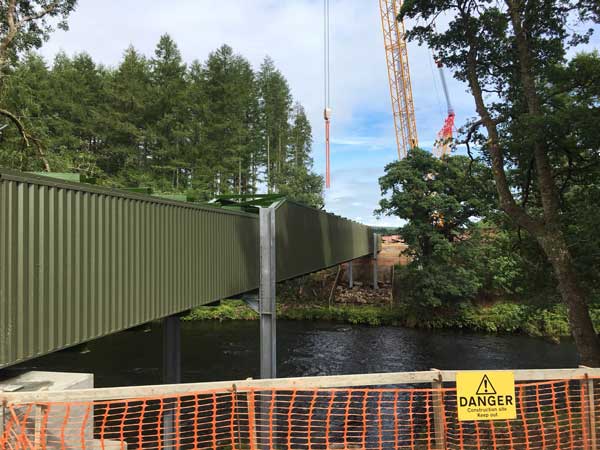 As part of the ongoing investment by Cemex at its Cambusmore quarry site in Stirlingshire, Adey Steel has completed a contract to design, fabricate and clad a 77m-long conveyor bridge, which will aid transportation of aggregate across a quarry pool.

Adey Steel said its technical team provided a modular design that offered a large amount of offsite fabrication and assembly as well as a fast installation method that minimised the disruption brought about by challenging site ground conditions and changeable weather.

The truss bridge was modularised into five main pieces using bolted splice connections between the large rolled steel angle (RSA) and UC sections. Each bridge module was up to 18m in length and, when fully clad, weighed over five tonnes.

Adey Steel Project Manager Richard Greasley said: “The heavy emphasis on offsite manufacture allowed site programmes to be cut right back to the bone, every task that could be completed in controlled factory conditions was done, which was instrumental in the overall project success.”

The quarry produces in the region of 400,000 tonnes of sand and gravel per year, which feeds into the local and regional construction industry.