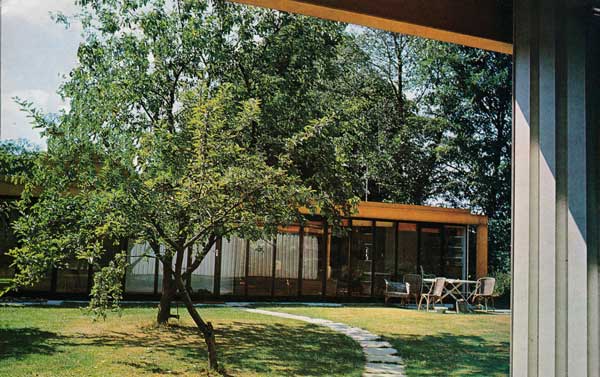 The house from the car port

Richard + Su Rogers believe in using available materials to create individual houses by industrialised techniques. John Young here describes two recent buildings and outlines the next steps in the development of the concept.

Richard + Su Rogers have spent the last few years developing a series of houses which offer the users an environment which they can adapt, add to, and change at will. Their eventual goal is to develop houses as off-the-peg consumer items, which offer the potential home-seeker a kit of parts, with unlimited possibilities for freedom of choice and identity, and which can be bought just as easily as a car can be bought today. 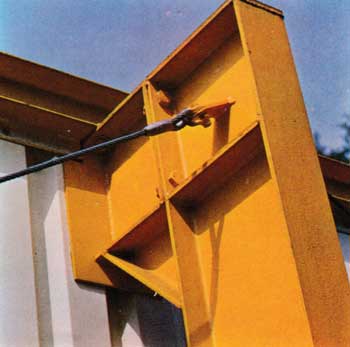 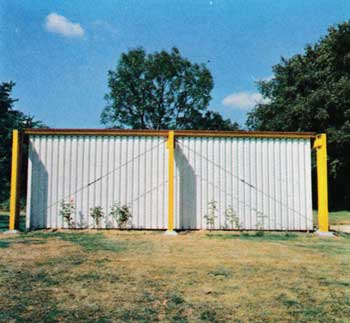 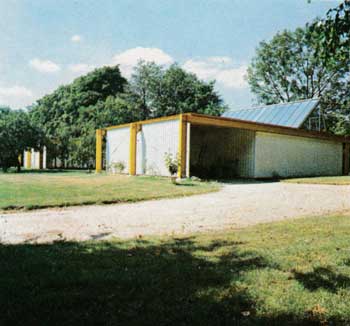 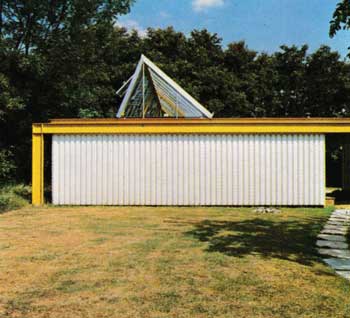 Side elevation of studio 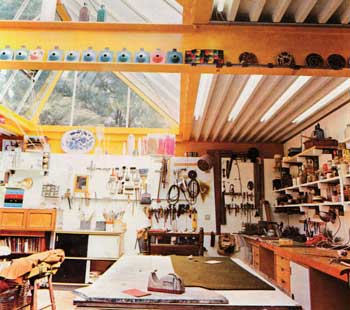 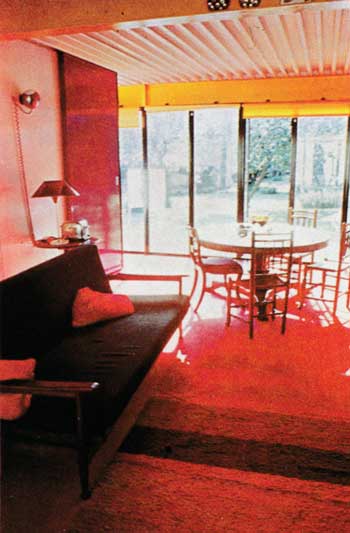 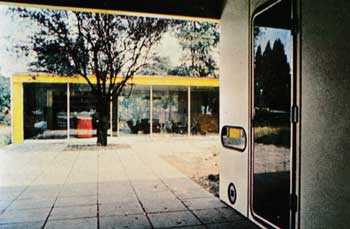 The Rogers’ house at Wimbledon 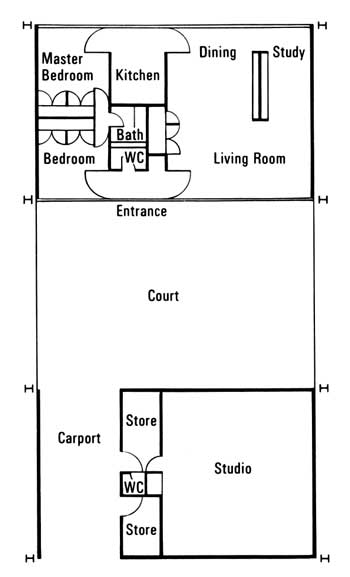 However, they firmly believe that serious comparisons with the production techniques of the motor industry are largely irrelevant, since it is unlikely that the demands of the UK market could ever justify the capital outlay on plant for the mass-production of houses. Instead, the Rogers team uses available technology and materials, already proven in the transport, aerospace and refrigeration industries. Their buildings have few elements and are assembled from largely factory finished, maintenance-free components using the minimum of site labour.

Two houses have been completed this year in the Rogers building programme, both single storey, one at Ulting in Essex, the other in Wimbledon. Both sites are long and narrow, and the planning has been organized for maximum privacy whereby each house has two separate elements separated by a 40ft wide court.

The Ulting house has a long west view into an orchard and looks east across the court towards the windowless rooflit studio. Subsequent owners can remove wall panels on the studio and turn it into a second house or make it into an extension of the first, either with a corridor link, or by developing the linear growth. The Wimbledon house has a separate flatlet and pottery studio which acts as a sound barrier between the house and a major road.

To allow for growth and change, both houses have clear span steel structures permitting maximum demountability and re-use of the enclosing envelope and internal partitions. Structure consists of rigid portal frames spanning 45ft, shop fabricated from 12 × 5 × 25 lb I-beams. The Ulting house uses steel wires and turnbuckles for wind bracing between portals, with stiffening in the horizontal plane achieved by the corrugated steel roof deck acting as a diaphragm. The deck has a 2½in deep profile with ribs at 6in centres which dictate the partitioning module, and the factory-applied vinyl-based coating is left as an exposed ceiling. The walls are clad in white Colorsteel corrugated sheet using shot-fired fasteners and selascrews. Insulation is achieved with a plasterboard-based, dry-lining system. Partitions are wedged between floor and deck, and the concentrated service core containing bathroom, shower, kitchen, storage and warm-air heating is the only restriction on planning flexibility.

Whereas in the Ulting house, the steel structure is exposed and completely articulated from the enclosing envelope, at Wimbledon it is brought inside the skin to eliminate maintenance of the steelwork. The cladding system is a fully-finished, maintenance-free, sandwich panel with an expanded polystyrene core. Originally developed in the USA for refrigerated transport, this is its first application in the UK. Windows are either full height double-glazed in sliding steel frames, or neoprene zipped into the panels, and all internal subdivision is in the form of sliding partitions enabling the whole plan to be opened up or closed at will.

In both the Ulting and Wimbledon houses, minimal tolerances were possible right from the erection of the steel frames (+⅛in over 45ft) and maintained throughout the job, departing radically from the theory of first and second fixings in traditional methods of construction. Cost per square foot is comparable with traditional building, but this is based on one-off only. Substantial reductions would be possible with any quantity, since this form of construction is material rather than labour intensive, and consequently any bulk-buying of components would reduce costs significantly.

These two designs represented Great Britain at the Paris Biennale, and the Rogers’ latest work on housing won second prize in a national competition last year. This current work attempts to combine structure and envelope to produce a long-span monocoque structure based on a sheet steel and expanded urethane sandwich. The prototype will begin this winter, and incorporates a light RHS framework within the panel thickness, and rigidized Stelvetite for the skins. It will also be the first two-storey house in their building programme.

The Rogers team are developing houses which respect the disciplines of production rather than exploit the limitations of tradition and imitation and the results might just capture the imagination of the house-buying public.