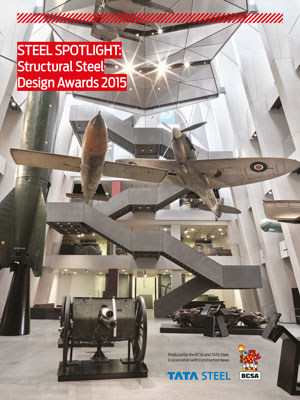 Each of the five award winning steel projects is featured in length along with shorter articles on the three commendations and two certificates of merit.

The SSDA scheme was instituted in 1969 to recognise the high standards of structural and architectural design attainable in the use of steel and its potential in terms of efficiency, cost effectiveness, aesthetics and innovation.

The Awards aim to promote the innovative use of steel by rewarding outstanding projects to stand as an example to others.

The Awards are run annually and are open to structural steelwork projects both in the UK and overseas, which use steel predominantly sourced from Tata Steel and which employ a UK or Irish steelwork contractor in their construction. Projects must have been completed in the two years prior to the year of entry.