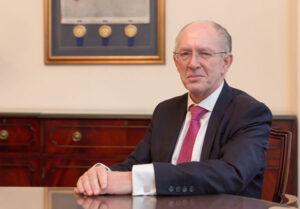 The British Constructional Steelwork Association (BCSA) is calling on the UK Government to introduce a minimum UK content of 90% for the HS2 infrastructure project, following news that an early contract for 9,000 tonnes of structural steel has been awarded to French company, Eiffage Metal.

The basis for the BCSA’s campaign for 90% UK content in the project is threefold: HS2 is a publicly funded infrastructure project, the largest in Europe, which should benefit British industry, the UK economy and create jobs; the constructional steel products used in the project are not specialist, and can be sourced by UK companies, whose production capacity far outstrips that demanded by the project; and there is a precedent for imposed targets for UK content in government projects, such as that in the Dogger Bank offshore windfarm

Dr David Moore, CEO of the BCSA (pictured), said: “HS2 presents a unique opportunity for the UK steel construction industry, and in particular the steelwork contractors, to showcase what they do best as well as kick-starting the UK economy.

“Unfortunately, although we’re at an early stage in the project, so far it seems more likely that the project will contribute to the “levelling-up” of northern France than northern England.

“I have raised the concerns of BCSA members with the CEO of HS2 and government ministers, who have unfortunately only confirmed that early contracts have indeed been awarded to continental companies and that there isn’t, and are no plans to introduce, a minimum UK content for the steelwork in the project.

“In order that HS2 fulfils its much-vaunted promise of delivering economic opportunity and prosperity for the British supply chain, it’s vital that the government commits to utilising the expertise of UK contractors. That is why we’re asking for 90% of the HS2 steelwork, used in the like of bridges, viaducts and stations, to be sourced locally.”