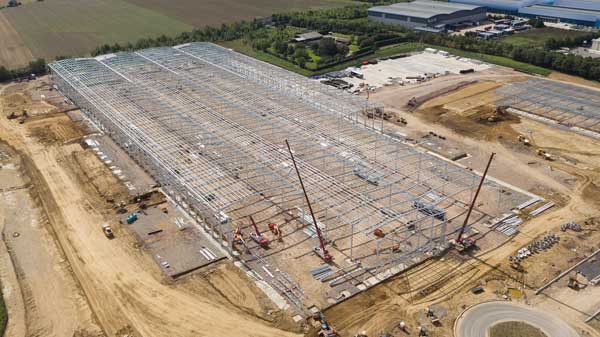 For the erection programme, Caunton divided the building into four separate zones

A series of individually-designed portal frames has proven to be the most cost-efficient solution for a major Co-op distribution centre.

Developed by Tritax Symmetry and designed by AJA Architects, the 61,409m² facility will create up to 1,200 new jobs and will support the Co-op’s continued growth strategy across London, the South and South East.

Targeting a BREEAM “Excellent’ rating and an EPC rating of A, main contractor Winvic says this is one of the most sustainable industrial facilities in the country. 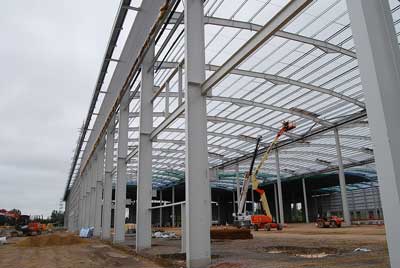 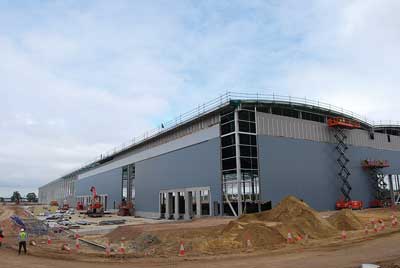 Cladding installation follows on behind the steel erection programme 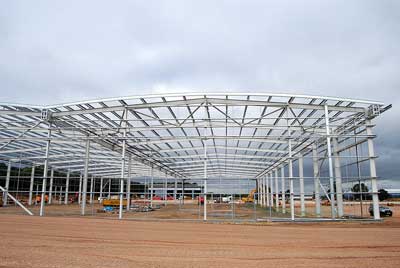 Covering an area of 50-acres, the site is known as Symmetry Park, and as well as the large main distribution centre, the scheme also includes two smaller steel-framed buildings, a De-Kit building (for recycling packaging) and a vehicle maintenance unit (VMU). The De-Kit building is a portal frame with two 28m-wide spans, while the VMU is a 26m-wide single span structure.

Work on the greenfield site began in January with a considerable earthworks programme, followed by the steelwork erection by Caunton Engineering, which was adapted and designed specifically for the project.

“Ordinarily the steelwork erection for the distribution centre would have utilised the ground outside of its footprint, but as we were still doing earthworks, Caunton had to position its cranes and MEWPs inside the structure and change its build programme to suit,” says Winvic Project Manager Ian Evans.

Supported on pad foundations, the main distribution centre is a large portal-framed structure, measuring 357m-long x 144m-wide. It has four equal spans of 36m and reaches a maximum height of 15m at the haunch.

Inside the building there will be various zones for the storage of food in ambient, chilled and frozen sections. To service and maintain these areas, the distribution centre will have gantries, walkways, and supports for pipework and power cables, all connected to the main steel frame.

“The internal layout of the building and its different uses, meant we had to design 18 separate portal frames for the building, in order to create the most efficient design,” explains Caunton Engineering Senior Structural Engineer Julian Harrold.

“Some parts of the building have more maintenance walkways and gantries, such as the freezer zone, so the portal frame design needed to change along the length of the structure.”

The different portal frames along the building’s length mean the column sizes change as do the rafters, according to the loading they are expected to carry. Roof rafters within the structure vary from 82kg/m² up to 238kg/m².

Slightly unusual for a modern distribution centre, it features a barrel-vault style roof, as opposed the more traditional pitched roof. This shape has impacted on the way the rafters had to be erected. Instead of two main sections forming each span, there are four members for every span, each cranked to create the desired barrel shape.

Two pairs of rafters were assembled on the ground, and with two cranes working in tandem, each piece was then lifted up, connected to a column and then bolted together at mid-span.

Splitting the structure into four zones along its width, the erection sequence saw Caunton erect the two middle spans in tandem with two mobile cranes, followed by the outer spans. This sequence was then repeated for each of the subsequent zones.

The distribution centre also features an attached two-storey office block measuring 90m-long x 18m-wide, which is located midway along one of the main elevations.

So, staff do not have to enter the office via the busy warehouse or the surrounding service yard, access is via an internal first floor steel walkway, which is supported by the structure’s main perimeter columns. The walkway extends along the elevation and attaches to an external steel-framed lift and stair tower. Meanwhile, on the opposite elevation, the distribution centre has a single-storey operations hub building.

Once the distribution centre and the two smaller De-Kit and VMU structures were all erected, Caunton also erected a pedestrian bridge that spans the site’s access road and connects the main facility with the car park.

In a separate contract, Caunton will be returning to the site in the New Year to erect internal steelwork as part of the fit-out, which Winvic is also undertaking. This second phase of steelwork consists of the gantries and maintenance walkways.

Andy Perry, Supply Chain & Logistics Director, Co-op, says: “We are delighted to have committed to this exciting new project and look forward to developing a market leading RDC with our partners at Tritax Symmetry and Winvic. The site will deliver greater agility, scale and efficiency – improving service and availability at existing stores while building capacity to support our ambitions for continued growth.”

Summing up and emphasising the importance of distribution centres, Councillor Kevin Collins, Executive Member for Planning & Regeneration, Central Bedfordshire Council, says: “It is pleasing to see the arrival of the Co-op to Biggleswade. The modern and efficient scheme will inject significant investment into the area and create a large number of jobs for the local community.”

The Co-op Regional Distribution Centre is scheduled to be operational in June 2021.