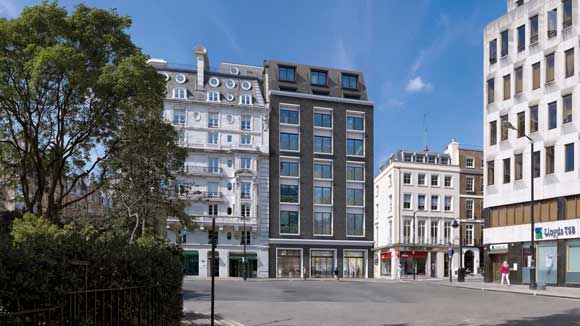 A number of logistical challenges have been overcome during the steelwork programme for a new office and retail development in the West End of London.

Now that better times have returned to the industry as a whole, the office sector in the capital is racing ahead and experiencing even more activity, especially in the commercial havens of the two cities – London and Westminster.

A case in point is the City of Westminster’s West End where a number of high-profile commercial developments are taking place. One of the more interesting is 11-12 Hanover Square, a project that will offer commercial office space as well as a retail frontage along one of London’s prime shopping thoroughfares.

Situated on a plot previously occupied by four properties separated by an internal courtyard, the new 15m wide x 50m long eight-storey building fills in a space between Hanover Square and Oxford Street.

It will offer 4,500m² of office accommodation and 1,400m² of retail space. The basement, ground and first floor levels will be split in half, with the areas nearest Oxford Street dedicated to retail, and the other half of these floors, facing Hanover Square, occupied by a plant room (basement), a ground floor entrance lobby, and offices. 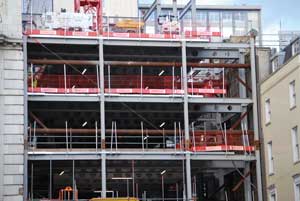 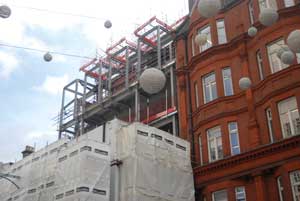 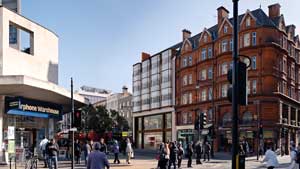 From second up to seventh floor level the building is solely commercial office space, with the sixth floor benefiting from having a roof garden overlooking Oxford Street offering breakout space for tenants.

Main contractor McLaren began work on site in November 2014 with the demolition of the existing buildings. The basement was then deepened and a retaining wall installed along with piled foundations.

“There are quite a few steel to concrete interfaces at ground floor level that have required a lot of coordination between trades,” says McLaren Construction Senior Project Manager Eike Schwartlander.

“Because of the excessive loads coming down the frame, four of the main steel columns are founded on the basement floor and then embedded in concrete up to the ground floor slab for extra stability.”

Concreting these columns had to be left until the entire frame was completed in December, which has meant basement works having to be staggered.

“However a steel frame has proven to be the most convenient material for this very confined site as deliveries are a challenge,” adds Mr Schwartlander [see box].

As well as from bracing, the steel frame gets its stability from two steel-framed stair cores and two lift shafts.

Steel has been erected around a regular grid with the main columns predominantly positioned along the site’s perimeters. These in turn support 15m-long cellular beams, which give the building its clear column-free spaces on each floor.

“By using a steel composite solution we’ve also been able to design ‘soft spots’ into some of the lower retail floors where the future tenants can add stairs or even escalators if they choose,” he adds.

Once steelwork is delivered to site BHC has erected the majority of the columns and beams with the on site tower crane. The only notable exception being a couple of second floor transfer girders, required because of the slight grid pattern change needed to accommodate the roof garden.

Weighing in at 20t the two 15m long beams were too heavy for the tower crane and so they were installed during a specially arranged weekend lifting operation.

The entire steelwork for this project, as well as the transfer girders, had to be lifted into place over three sets of temporary props that have been installed across the site in order to support the neighbouring buildings.

“Because of the height we had to reach in order to lift the beams over the props and then into the site’s footprint we had to use a 500t-capacity mobile crane,” says BHC Project Manager Bobby McCormick.

As the frame is erected BHC is also installing steel angles that connect the new steelwork to the façades of the four buildings that abut the new building on two sides.

“Although the building is structurally independent, the angles are a restraining element to mitigate against any potential movement,” explains Mr Schwartlander.

Bringing materials to site on any central London project can be challenging, and this job is no exception. Not only is there no room for materials storage on site, as the new building covers the entire site’s footprint, the project’s two street frontages also have their restrictions.

Site cabins are positioned along the Oxford Street frontage blocking any potential vehicular access, although bringing deliveries along Oxford Street would have caused quite a few challenges.

Steel deliveries are unloaded from the Hanover Square side of the project and brought to site in a just-in-time basis. The site does have a cordoned off area for parking delivery wagons, but the project team does have to coordinate with the council and two other construction teams currently working on the Square.

Other works currently being undertaken in the vicinity include Crossrail, which is temporarily occupying the entire western side of the Square, and another commercial development directly opposite the McLaren job.