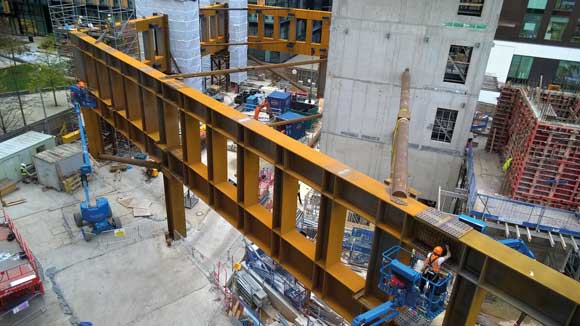 Truss sections are bolted together, while (at the top of the picture) welding is undertaken inside enclosures

An exo-skeleton, fabricated entirely of weathering steel, has created the standout appearance and the column-free spans for the final commercial development at London’s Pancras Square.

Described as one of the largest regeneration schemes in Europe, it will include 50 new buildings, 2,000 new homes, 20 new streets and 10 new public squares spread over 67 acres. The area even has its own brand new postcode – London N1C.

One of the main elements of this huge scheme is Pancras Square, situated between the two large London rail terminuses of Kings Cross and St Pancras.

The square consists of seven buildings arranged around a steel-framed wedge-shaped podium that accommodates a shared basement delivery space with the top level supporting a landscaped public realm [see box].

Four of the surrounding buildings are either steel-framed or feature substantial structural steel elements, including Four Pancras Square which is the final structure to be built around the public realm.

What makes this building different from its neighbours is that instead of using a single framing solution, this structure is using two.

The building is essentially concrete-framed, a solution chosen by the client and design team as the office floors are formed around internal spans of no more than 9m.

However a long column-free span was required for the entire main entrance elevation, while longer column spacings were also desired for the other ground floor façades. 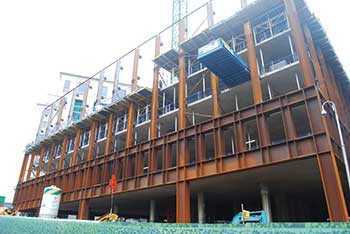 The exo-skeleton wraps around the entire building

As this could not be achieved with the chosen framing material, a steel exo-skeleton wraps around the entire building. Project architect Eric Parry conceived this idea from gas holders that previously occupied the site.

The steel skeleton forms the exterior of the entire building, supporting all of the internal floor slabs along each of the four elevations. The external steelwork and the floors are connected at key strategic locations that allow differential movements between the two to occur.

The main feature of the steelwork is a storey-high Vierendeel truss that encircles the building at first floor level.

As well as delivering a structural solution for the desired ground floor configuration, the steelwork exo-skeleton will also give the new building the industrial look that was also desired by the client and architect.

As Victorian era gasholders formerly occupied the site, the steelwork façade will create a heritage look reminiscent of these times.

This is because weathering steel has been used for the entire skeleton, and its hue will subtly change over time lending itself to the desired heritage appearance. Another benefit of using this type of steel is the fact that, even though it will remain exposed, it will not need painting or any maintenance throughout its lifetime.

As the truss elements all measure 5m-high they had to be transported to site on tilt frames, holding the steelwork at an angle to lessen their height allowing them to be transported by road. The height of each steel element was further increased by a series of stainless steel stems that were welded into place during the fabrication process. These stems have an attached bracket which supports the concrete floor slabs.

Once the truss elements arrived on site erecting them proved to be a challenge, as access around the site was restricted due to a busy road along one elevation and buildings and the completed public realm along the other sides.

“The solution was to erect the initial parts of the truss from within the building’s footprint using a 500t-capacity mobile crane,” explains BAM Construction Manager David Bee. “We eventually erected the entire truss from three crane positions, the final two being just outside of the site and needing temporary road closures.”

The project had initially gone through a number of design changes as well as a value engineering process. During these processes the team had realised that the only way to erect a proportion of the truss was to position a large mobile crane within the project footprint.

The design team had consequently strengthened the substructure so it could support a large crane, although a fair amount of temporary props and trestles were also needed below the ground floor slab.

The truss sections that form the 27m-long column-free entrance elevation were erected using a series of temporary trestles that had to remain in place until the connections had been made and the steel could support itself.

Most of the exo-skeleton has bolted connections, with approximately 10,000 Tension Control Bolt’s used throughout the frame. However, along the southern elevation the truss sections are joined with welded connections.

“The bolted option would have given time and cost benefits but could not be achieved on this large truss, so we have welded connections that give a different aesthetic appearance,” says BAM Design Associate Stuart Hinde.

18 sections were brought to site to form the complete truss

“From within temporary enclosed towers, each of the two connections between truss sections required a combined total of 72 hours of welding,” explains Mr Hayes.

It took four weeks to erect the truss around the building’s perimeter. Once it was completed the remainder of the weathering steel exo-skeleton was erected in sequence with the concrete floor slabs.

From the truss upwards the steel fabricated columns were erected in two-storey high sections and held in place with temporary props. Once the adjacent slabs had been installed, the props were removed and a further set of columns was erected. This sequence was repeated until the final section of steelwork, comprising an uppermost three-storey high set of columns, was up.

“All of the steel columns above the truss are concrete-filled for fire protection,” adds AKT 11 Associate Director David Illingworth. “They also have ventilation holes to stop pressure building up within the sections in a fire.”

These measures were the result of some exhaustive fire engineering tests to determine the interaction between the steelwork and the concrete slabs in a fire condition.

Four Pancras Square is due to be completed in early 2017. 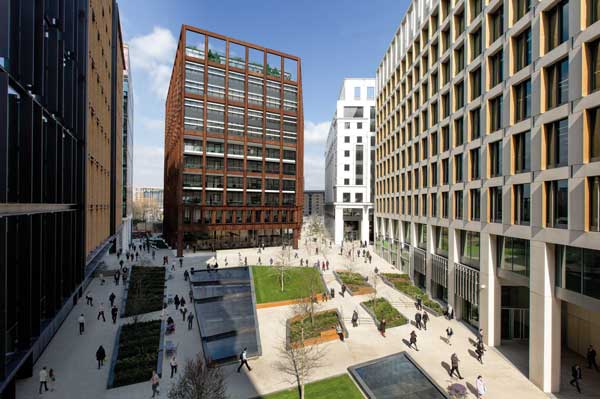 Over the last three years New Steel Construction (NSC) has reported on the continuing development of Pancras Square, beginning with the construction of the centrally-positioned steel-framed podium (see NSC Jan/Feb 2013).

Requiring 600t of steel this vital component not only supports the public realm and provides the buildings with a shared basement, it also created a workspace platform and a delivery access point for the subsequent construction phases.

BAM Design also changed its design from an insitu concrete frame to steel in order to speed up the programme, saving six weeks in the process.

Sitting opposite St Pancras Station on the western side of the development is 6 Pancras Square (see NSC March 2014). Vinci Construction was the main contractor for this 11-storey steel-framed project that provides 39,500m² of office space.

Working on behalf of BAM, Severfield erected 1,900t of steel for this building. The company was also the steel contractor for the podium as well as 6 Pancras Square. 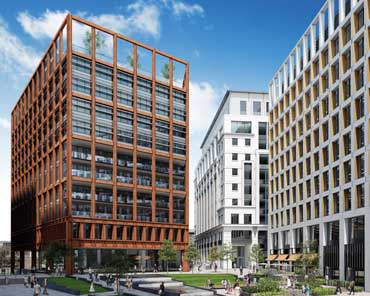 The major site welds at Four Pancras Square demonstrate that when properly planned and executed, site welding is a safe, reliable and high quality technique. Planning and controlled execution are absolutely key to success. The first requirement is a Weld Procedure Specification (WPS), which covers the steel type, thickness, joint type etc and specifies how the joint is to be completed, including the welding consumable, sequence and speed of welding runs and electric parameters. Severfield already had an appropriate WPS, as otherwise a test piece would need to be welded and tested, to demonstrate that the proposed specification would produce a satisfactory weld.

The primary driver for a WPS is the avoidance of hydrogen cracking. Sources of hydrogen are any contamination, the steel and consumables and the atmosphere. BS EN 1011 provides guidance on the control of hydrogen, relating the weldability of the parent steelwork (as measured by the Carbon Equivalent Value (CEV)) and the heat input (which depends on current, weld speed and consumable size) to the need to pre-heat the joint. When thick elements are connected – with a large ‘combined thickness’ – the steel acts as a heat sink, allowing the steel to cool more rapidly and increasing the risk of hydrogen cracking. The management of these issues is the responsibility of the Steelwork Contractor, who will have a qualified and experienced Responsible Welding Contractor. Weathering steel has a higher CEV than ordinary steel, which increases the risk of hydrogen cracking and was therefore reflected in the WPS used at Four Pancras Square.

The encapsulation of the joints described in the main article serves a number of purposes. Safe access is obviously essential, but the protection also shields the joint from the elements and – importantly – prevents wind from disturbing the shielding gas used during welding. At Four Pancras Square, the joint was pre-heated to a minimum of 100°C, which reduced the risk of hydrogen cracking. Pre-heat requirements are specified on the WPS.

The skill of the welder is obviously very important. The welder must be qualified for the relevant welding process and welding position. The welding position relates to the physical position, but also the direction of travel of the welding, because the force of the weld arc may act with, or against, the action of gravity on the molten metal. On site it is obviously not possible to turn the members to provide a more convenient position for welding.

Although welding is the responsibility of the Steelwork Contractor, design engineers may find the following references helpful background.