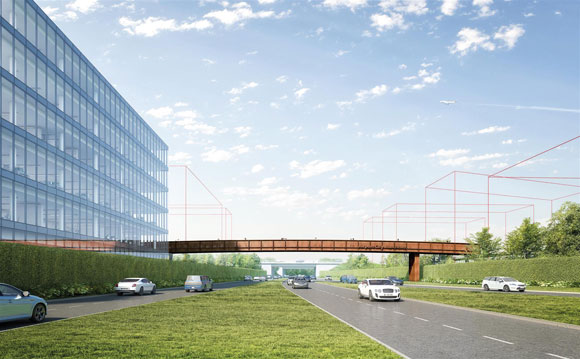 The bridge will act as a catalyst for future development

The innate beauty of weathering steel meant it was the material of choice for a new pedestrian and cycle link to Airport City Manchester.

Designed by Manchester architects 5plus and structurally designed by RoC Consulting, the bridge is 127m-long, including its north and south approaches, and 6m wide. It has been described as a striking addition to the landscape at Airport City Manchester, which is the name given to the mixed-use development adjacent to the airport.

Fabricated by Cleveland Bridge, the half-through bridge comprises two main plate girders with cross girders at regular intervals. Each main plate girder is made up of three sections varying in length, up to a maximum of 30m-long, and the webs feature more than 21,000 perforations along the bridge’s length.

“We specified weathering steel for the honesty, robustness and innate beauty of the material as it will bring a subtle richness in the context of the overall masterplan as buildings develop around it. 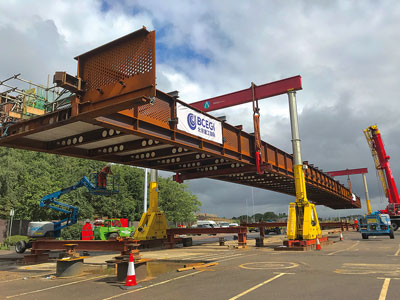 Pre-assembled offsite, a 78.5m-long section of the bridge was installed in one piece 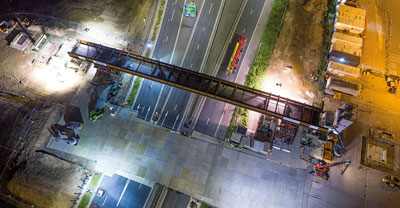 “The detailing was undertaken in a manner to further express its construction and engineering reflecting on the industrial heritage of Manchester, with a confident design twist perforating the web of the steel plate girder to create a delicacy and engineered lightness playing on the perception of the inherent strength of the material,” explains 5plus Architects Director John Barrett.

“The perforations also illustrate the stress patterns across the steel plate, subtly illustrating the method of construction and telling the story of its engineering.”

There are around 25,000 people working on the Manchester Airport site. It also has its Airport Academy training centre within its Ground Transport Interchange, which provides employment and training for local unemployed people. Earlier in the year, a state-of-the-art AeroZone interactive classroom opened, which will be used by all schools in Woodhouse Park and the wider Wythenshawe area.

The bridge will also serve as a vital link across the 73-acre site of main development land at Airport City Manchester, which has the capacity to deliver a diverse range of over 15,000 jobs across a number of sectors.

For the installation programme, the main steel walkway structure, measuring 78.5m- long and including the 50m-long main span between its two piers, was assembled in a car park adjacent to the bridge’s final position. The assembly also included the installation of the concrete deck.

The three sections of each main plate girder were set on a series of trestles, using temporary restraint systems. The paired plate girders were then joined by bolted cross girders, aligned and fully butt welded together. The butt welds were also ground flushed for an aesthetic finish. A significant amount of temporary works was also installed, as this was required to provide the structure with adequate stability during the installation process.

Cleveland Bridge, working in conjunction with the main contractor BCEGi, manoeuvred the structure into position during a 12-hour operation. The north and south approach staircases and lifts were installed in two subsequent and separate procedures.

Chris Droogan, Managing Director of Cleveland Bridge UK, says: “We are very proud to be part of such an important stage of the development of Airport City Manchester, which is such a significant location for the North of England. The unique design of the bridge, with its extensive collection of perforations, required the extensive experience of our skilled engineers and fabricators who have transformed the architect’s vision into a structure that can be enjoyed by visitors and local people.”

Jonathan Haigh, Managing Director of MAG Property and Airport City Manchester Development Management Leader, said: “The new bridge is a key component of the Airport City Manchester masterplan and capitalises on the exceptional connectivity to multiple modes of public transport at the Manchester Airport Ground Transport Interchange. In turn, this will underpin increased usage of public transport to more sustainably facilitate occupier needs and enhance convenience for employees, visitors and neighbouring residents alike.

“It’s a striking addition to the local landscape, with the architecture reflecting our ambition to create a real sense of place and signal a high quality of environment. The bridge connects the emerging hotel district south of the M56 spur road to the larger swathe of development-ready land to the north, which is earmarked primarily for office and ancillary uses. It also enables car parking to be decanted away from the heart of the scheme helping to enrich the amenity value of public open spaces.”

The new bridge at Airport City Manchester is set to open to the public in November this year and when fully complete it will blend into the neighbouring buildings with extensive landscaping and public realm, as well as providing feature ramps and passenger lifts to ensure it is accessible to all. 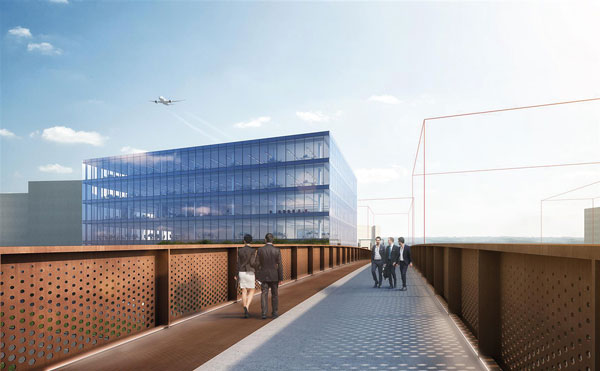 According to RoC Consulting the alignment and span arrangement of the bridge was set to suit the Airport City Masterplan, following several iterations of the scheme, over several years.

The level of the bridge deck is governed by the required highway clearance above the spur road. The resulting elevation is approximately 6m higher than the proposed ground levels at each end of the crossing.

At concept design stage, consideration was given to various bridge forms, including composite beam, through truss, box girder and arch forms, before the half-through plate girder bridge was chosen.

This form was selected as it provided an economical solution for the crossing while also providing an architectural statement reminiscent of Manchester’s industrial heritage.

The developed form consists of a pair of weathering steel plate girders, which both support the reinforced concrete deck and provide a parapet to protect bridge users. The primary plate girders are linked with weathering steel cross-girders at 2.5m centres which align with stiffeners to form the u-frames that give this type of bridge its lateral-torsional stability.