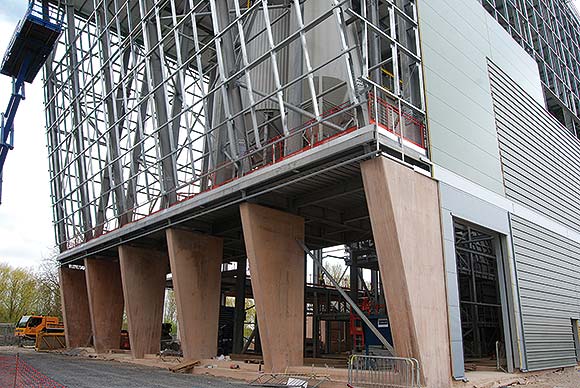 Work is progressing on schedule on a new energy from waste (EfW) plant in Exeter that once operational will process 60,000t of household refuse per annum for Devon County Council.

More and more of these facilities are being built throughout the UK as local authorities seek to find environmentally friendly alternatives to landfill.

As well as processing approximately one third of the county’s non recyclable municipal waste, the plant will enhance its green credentials by the fact that it will also recover value from the refuse with up to 3MW of electricity generated for the National Grid.

EfW facilities are invariably built with a steel frame because they are housed in large open plan structures, a form of construction best suited to steelwork.

The Exeter plant is no exception being a large beam, column and braced framed structure measuring approximately 24m wide by 80m long and with a maximum height of 35m. It is supported by piled foundations or from reinforced concrete frames forming the waste bunker, waste feed structure, offices and plant rooms.

All of the project’s steelwork has been galvanized. This ensures it is safe from corrosion caused by contact with inert gases and gives the material a minimum 25 year lifespan in this harsh environment.

Prior to any of the structural steelwork being erected on site by the Bourne Group, eight months of preliminary works were carried out.

“The site had originally been occupied by an incinerator and transfer station, but this had already been demolished by the time we started on site in early 2012,” explains Phil Moss, Chilworth Construction Management Construction Director. “Initially we did some piling and groundwork before the concrete superstructure was cast, this then allowed the main steelwork package to begin last January.”

Before the main steel programme commenced Bourne erected approximately 50t of steel to support a mezzanine level and the facility’s silo. This was followed by the erection of the boiler support frame and access walkways a couple of weeks later.

“The silo support steelwork was initially freestanding and was later connected to the main frame,” explains Rod Potts, Bourne Group Contracts Manager. “Installing this steel early in the programme allowed the fit out of the plant’s equipment to proceed on schedule.” 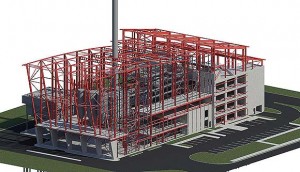 The project’s steel frame in its entirety 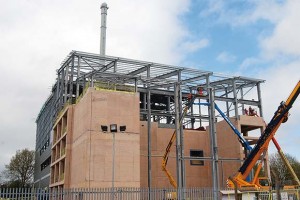 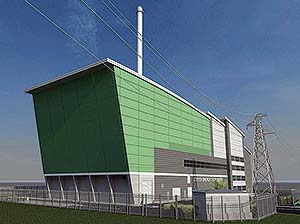 Nearby power lines have made lifting operations challenging

Towards the end of last year most of the large equipment for the facility was installed. This included a 120t combustor unit that was delivered to site in one load and then lifted into place by a 1,000t capacity crawler crane. The plant’s 65m tall chimney was also delivered to site and installed during the same period.

With all the major heavy lifting completed the main steel erection package was able to start in January with the frame being installed around and over the facility’s installed equipment.

“One of the main design challenges with the steel frame was ensuring coordination with the process equipment, while providing adequate support for elevated floors, mezzanines and platforms,” says Brian Melia, Project Engineer for Melia Smith & Jones.

“The advantages of using steel are the speed of construction and its flexibility,” adds Mr Moss. “The main steelwork went up while the fit out continued inside the facility, and some cold rolled sections, which aren’t structurally integral, have been left out temporarily to allow equipment to continue to be installed.”

As part of its main frame steel erection programme, Bourne is also carrying out the connection and cladding design as well as installing a series of internal crane beams.

Possible fatigue on the steel frame had to be taken into account during the design, as the waste crane will be in continual use for the life of the facility.

“We had to liaise closely with Bourne to make sure the structural members were not affected by the connection details and vice versa,” says Mr Melia.

The steel frame has also been designed to resist loading from the waste and ash cranes, product silos, wind, snow and imposed loading from operations and maintenance.

Great care and attention has had to be taken during all lifting operations due to the site’s location. The plant is nestled between a major power line and the main rail route between London and Cornwall.

Bourne has used a variety of mobile cranes, ranging from 50 tonners up to 100t capacity units. With up to four cranes on site at any one time, the main challenge has been to erect steel without over slewing the rail lines or the power line.

“We also had to position our cranes on either side of the structure as the centrally positioned chimney had to be manoeuvred around during the lifting in of the roof beams,” explains Mr Potts.

The structure’s main perimeter columns all arrived on site in three sections and the completed section has two bolted splices. These members support the roof that is formed by a series of 24m long Westok cellular beams.

The rear elevation of the facility features an outward sloping façade. To achieve this architectural component Bourne has installed a series of V-shaped column bases along the elevation; these bases each support a spliced raking member and a vertical member.

Overall stability of the frame, as well as for the rear elevation is achieved via horizontal roof and floor bracing, along with composite steel and concrete floors and reinforced concrete two way spanning slabs acting as diaphragms. These transfer lateral loads to vertical steel tubular bracing and reinforced shear walls.

The facility is expected to be processing waste by summer 2014.