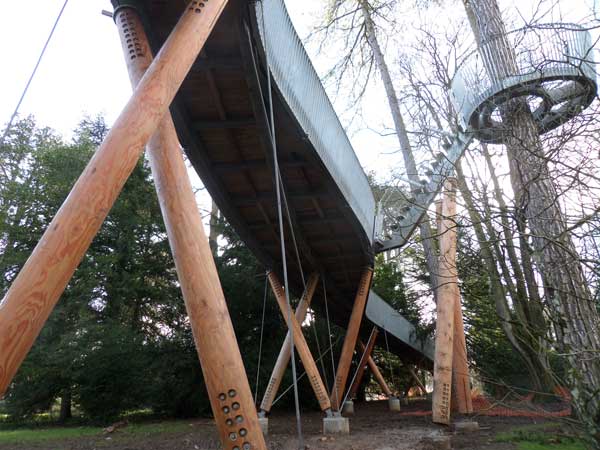 A steel walkway that transports visitors through the forest canopy will open this month at the UK’s National Arboretum. Martin Cooper reports.

Reaching a maximum height of 13m, the Stihl Treetop Walkway will transport visitors into the tree canopy to experience a high-level perspective of the arboretum and give them the opportunity to learn more about trees and how they live.

The walkway project has a history that goes back seven years when a concept design first came to light, but it was put on hold while the arboretum focused on fundraising and completing phase one, a new Welcome Building and car park.

However, after a three-year fundraising campaign by the arboretum’s partner charity Friends of Westonbirt Arboretum, and a refined and more cost-effective design in place, the project was able to start on site last May. 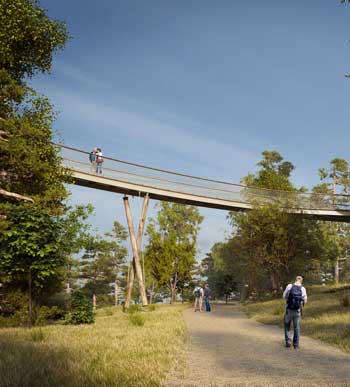 The 300m-long walkway reaches a height of 13m 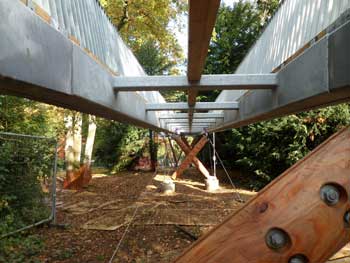 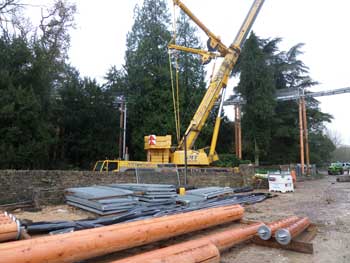 The erection process had to avoid damaging trees 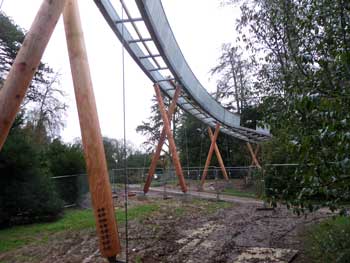 The walkway winds through the forest

“We made a few tweaks to the design, such as changing the walkway support spine from timber to steel,” says Buro Happold Project Engineer Joe Darcy.

“Steel was chosen as it is more durable and will give the walkway a longer lifespan, while we also needed a material to give us a stiffer deck to provide lateral stability.”

Westonbirt Arboretum Project Manager Sophie Nash adds: “We have used two primary materials to construct the walkway, steel and timber. Steel has been used to support the deck of the walkway, which enabled us to slim down its profile, reducing the visual impact on the Westonbirt landscape.

“Using steel to create a support spine for the timber deck also allowed us to create more gentle, swooping curves. We did utilise steel in other areas of the project to reduce maintenance requirements.”

The 300m-long S-shaped walkway winds its way through the Arboretum’s woodland starting at the recently opened Welcome Building. It is supported on 57 cigar-shaped raking timber columns and so one of the first tasks of the project was to position their foundations.

Column placings were very important, as a route for the walkway avoiding a number of important trees had already been mapped out. The foundations had to avoid damaging any tree roots and so a few columns had to be moved slightly off grid.

The walkway’s route was selected to make the most of the contours of the landscape and for its choice of canopy. Some pruning was carried out for the safety of the trees when erecting the walkway structure.

Once the concrete foundations had been completed steelwork contractor S H Structures was able to begin its work in October. As well as fabricating, supplying and erecting the steel walkway spine and balustrades, the company also erected the raking timber columns.

The columns are arranged in pairs and are connected to the ground and to the walkway steel spine via pin connections. As the walkway route passes over varying topography the main columns vary in height up to a maximum of 12m-high.

The walkway spine’s main girders are fabricated from Tata Steel hot rolled RHS sections, while the cross members are CHS. As most of the spans are curved in order to form the S-shape of the structure, The Angle Ring Company was sub-contracted by S H Structures to do the section bending before the fabrication process began.

Either end of the walkway features sloping access ramps; to support these areas column heights descend down to 2m-high members.

The walkway steelwork was fabricated and brought to site in 10.5m long × 1.6m wide sections that correspond to the distance between supporting columns.

“Once on site we bolted the balustrades to the spine’s main girders before lifting the complete sections into place,” explains S H Structures Project Manager Shane Marsh. “Each spine section weighed 4.5t.”

Working in and around a collection of important trees meant S H Structures had to use a combination of four cranes for the erection programme. A mobile tower crane was brought to site as it could reach over any trees, while three mobile cranes were used at different times with the largest having 350t capacity.

“Using these four cranes we were then able to erect the entire walkway by positioning cranes on just four prepared crane bases,” explains Mr Marsh. “In this way we caused minimal damage to the forest floor and avoided damaging trees.”

The erection followed a routine sequence once the first walkway section and its columns had been installed.

The first columns had to be propped until the walkway section had been bolted into place. From here on each span and its supporting columns were erected sequentially, with the previous span offering temporary support during the installation.

Along the walkways length there are two notable features, a viewing platform and a crow’s nest that wraps around a tree.

The viewing platform’s original design envisaged it also wrapping around a large tree, but unfortunately the tree died and had to be removed.

“The platform’s design was consequently refined to be formed from one large deck section measuring 3.5m in diameter. Because it is connected to the walkway by a rope bridge it is structurally independent and supported by six columns.”

The platform is one of many educational zones spread along the walkway’s length where visitors will be presented with representations on how trees live and grow.

One wrap-around feature does remain and this is known as the crow’s nest (main picture). Connected to the walkway by a staircase, the crow’s nest wraps around one of the Arboretum’s Black Pine trees.

Two circular sections, each weighing 2.5t, were bolted together insitu. A steel spine beam carrying the steps from the main walkway holds the cantilevering platform in place, while two propped columns also support it.

“This feature will be dynamically exciting as it will move slightly, giving visitors a ‘treetops feeling’,” sums up Mr Darcy.

The Stihl Treetop Walkway will open to the public this month (April).