February 1, 2007 by NSC2 in Projects and Features, Publications 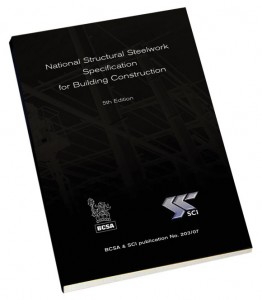 On 1st January 2007 the BCSA published the 5th edition of the National Structural Steelwork Specification for Building Construction (NSSS). The revision of the NSSS was prompted by the developing of a forthcoming European standard for the fabrication and erection of structural steelwork, BS EN 1090-2, which is expected to be introduced at the start of 2008.

“At the start it was decided not to completely adopt the philosophy of BS EN 1090-2 but to create a kind of halfway house between version 4 of the NSSS and the new European standard,” explains Dr David Moore, BCSA Director of Engineering.

The updated specification contains a number of changes that will be of interest to specifiers and steelwork contractors.

The reference standards for steel sections, structural bolts and welding have been updated to reflect the changes that have occurred since the publication of the 4th edition of the NSSS. The erection tolerances for foundation supports have now been aligned with the National Structural Concrete Specification.

The preferred generic treatment specifications originally developed by CIRIA have been moved from the Commentary into the NSSS.

“Those steelwork contractors with quality systems certified to BS EN ISO 9001 should expect to have the scope of certification endorsed by a specific reference to BS EN ISO 3834-3 in due course,” says Dr Moore. This will align with forthcoming requirements in BS EN 1090-1 and -2.

A new section has been added giving options for post-galvanizing inspection to avoid liquid metal assisted cracking. This is based on guidance given in the joint BCSA and Galvanizers Association publication ‘Galvanizing Structural Steelwork – An Approach to the Management of Liquid Metal Assisted Cracking’.

Meanwhile, the hold times in Annex A have been revised. These are now based on heat input and weld size rather than material grade. They are based on the recommendations given in Annex C of BS EN 1011 Part 2.

“The test requirements for stud welding have been clarified,” adds Dr Moore. They have been developed from issues identified in the BCSA ‘Code of Practice for Metal Decking and Stud Welding’. The revised recommendations include trial welds, tests and non-conformity procedures.