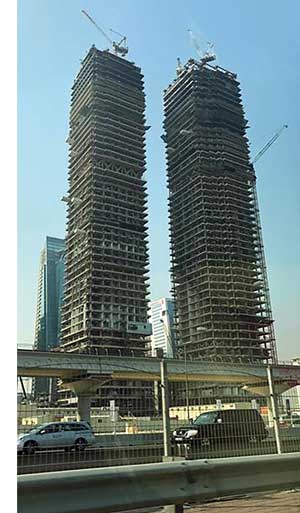 Structural Metal Decks (SMD) has completed a major contract worth more than £1M, shipping more than 100,000m² of steel decking to the United Arab Emirates for the construction of twin skyscrapers.

Located in Dubai, Tiara United Towers is a development of two 46-storey towers with each structure reaching a height of 193m.

SMD, which has a satellite office in Dubai and celebrated its 30th anniversary in 2017, has been working on the project since 2016.

SMD International Manager Jane Biddle said: “The first shipment arrived in October 2016 and during the ensuing period we shipped a total of 101,270m² of our TR80+ 0.9mm floor decking.”

She added: “The value of this project was £1.08M and was a significant step forward for SMD as we look to expand our overseas market.”

The Tiara United Towers is set to feature a coloration technique, by which the building façades appear in multiple colours.

The exterior of the building will also feature veins, like those on a leaf, spreading across the surface from the corners and ’embracing’ the building.

The development is aiming to be the first building in Dubai to be certified by the US Green Building Council for achieving LEED (Leadership in Energy & Environmental Design) ‘Gold’ status.