Two bridges installed in 11 hours on A14 upgrade scheme 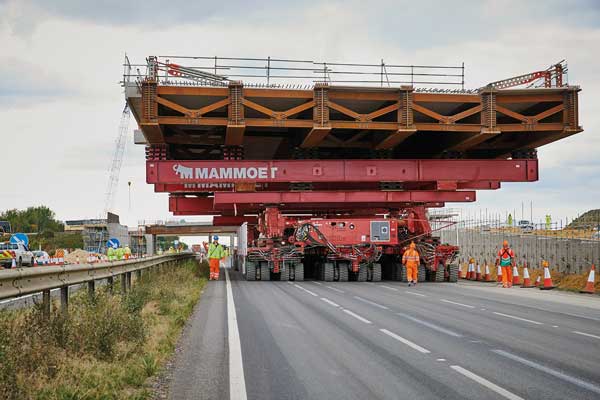 Known as the Bar Hill Junction bridges, each of the two composite decks measured 44m-long and contained 330t of steel and 720t of concrete.

A total of 12 girders were fabricated at the company’s facility in Darlington, County Durham, before being transported by road over two weeks during the summer.

The girders were then braced together on-site and handed over to the A14 Integrated Delivery Team (IDT), the joint venture comprising Costain, Skanska, Balfour Beatty and designers Atkins/CH2M, before the reinforced concrete deck slab was added.

Once the concrete was cured, the decks were lifted from a series of trestles onto self-propelled modular transporters (SPMTs). They were then manoeuvred slowly into position before being lowered onto the newly-constructed abutments.

The A14 was closed to traffic at 9pm on a Friday evening to allow sections of the existing A14 carriageway to be infilled and regraded at the Bar Hill site to accommodate the SPMTs. The bridges were then installed and the road re-opened by noon on Sunday – 18 hours ahead of schedule.