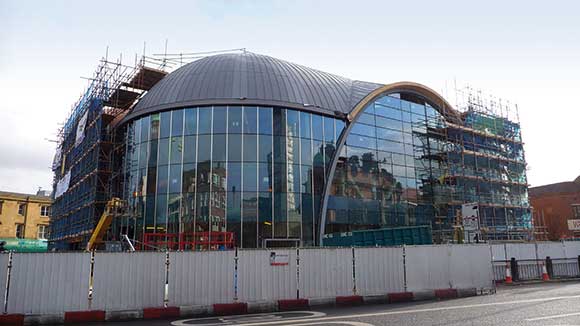 Off-site construction came to the fore when a new commercial development was built over an existing underground railway station. Martin Cooper reports from Newcastle’s iconic Hub.

As part of a £22M upgrade of the Haymarket Metro station, a new landmark structure is taking shape in Newcastle city centre. Known as the Hub, this four-storey mixed use development has presented a number of unique challenges due to its location, while the design encompasses an innovative series of steel trusses which negate the need for traditional structural foundations. 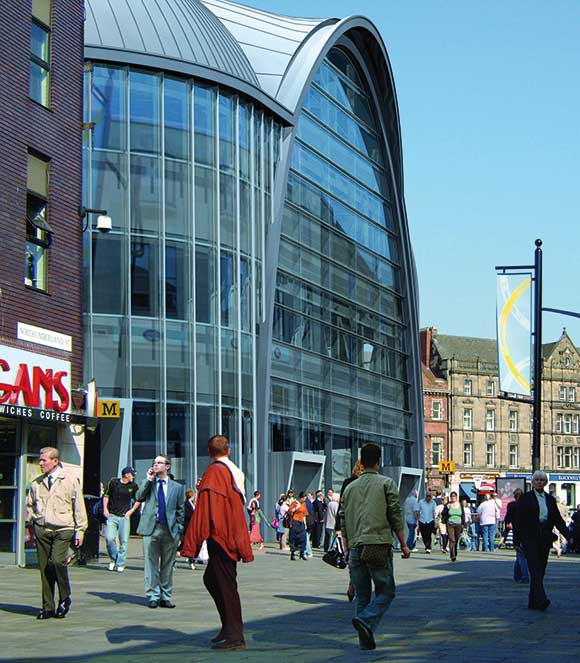 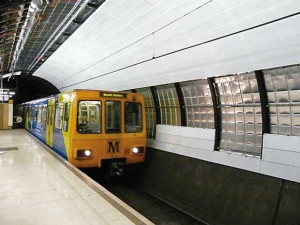 The project includes the refurbishment of the Haymarket Metro Station

As the new building straddles an underground station with three subterranean tunnels, traditional piling was out of the question so a total of 11 large steel load bearing columns had to be located outside of the station’s footprint. These giant columns then support a network of steel trusses which span the station and act as a bridge to provide large open areas for the new building’s floors.

The building’s location above one of Newcastle’s busiest Metro stations – which has remained open throughout the works – has meant large parts of the construction programme has been completed at night. This nocturnal programme has encompassed the majority of work carried out by steelwork contractor Cleveland Bridge, including the erection of the steel frame and the trusses.

A 1,000t mobile crane was used for the majority of the steelwork erection and due to the lack of space to park this large vehicle in the city centre and the need to keep the station open, the work was carried out at night.

“The 11 large columns are mostly 475 x 475 fabricated sections and were brought to site in complete pieces,” explains Ken Hudson, Cleveland Bridge Project Engineer. “They are big sections as they take some big loads.”

Off-site steelwork fabrication has played an integral role in this project according to Alastair Bell, Director at Reid Jubb Brown Architecture. “The organic shape of the building and the large open internal spans could not have been achieved without using steel,” he says. “The trusses were fabricated off-site and arrived in two pieces which meant they were quickly assembled on the ground before being lifted into place. This all contributed to getting the frame up speedily which was highly important to the overall programme.”

Once the 11 main supporting columns had been erected the steel trusses, which are all approximately 30m long and 9m deep, were then lifted into place. Inside the trusses there are two floors, second and third. But the second floor slab initially acted as a crash deck and once cast, this then allowed work to continue above and below. 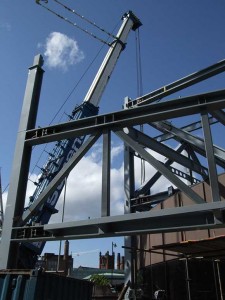 Most of the steelwork was erected at night or over weekends using one 1,000t capacity crane

“That’s why it was so important to get the trusses up quickly, they not only act as a bridge to support the building, but once the crash deck was up other trades and work could get underway,” explains Mr Bell.

The trusses straddled the old one-storey Metro building and once a crash deck was up this was then demolished and The Hub’s new first floor was then hung from the trusses above. “The trusses were the key to the entire project,” adds Mr Bell.

Overall this is a very significant building for Newcastle located on a prime spot at one end of the major thoroughfare Northumberland Street. Below ground the station platforms have been completely refurbished, while above ground a new larger entrance foyer and attached retail area have been created within the Hub’s ground floor and above this the building contains four levels of office space providing 2,787m².

Around the perimeter of the structure there is a series of one-storey high steel trusses. Positioned along each of the building’s four elevations, these trusses basically form the structure’s organic shape as well as picking up the glazing. The perimeter trusses are not linked to each other as each corner of the building is rounded, requiring more complex steelwork to be inserted.

Up to third floor level the elevations all feature vertical walls, but above this, the building is topped by a zinc covered domed roof, which also has the fourth floor level within it.

A domed roof was chosen not just because of its appearance but because the shape possesses inherent strength. However, this complex shape presented a host of technical issues which had to be overcome during the design stage.

“One of our architectural engineers is a recognised expert in the use of the very latest 3D modelling software technology called Rhino and has been able to design the highly innovative roof which only a few years ago would have been technically impossible to achieve,” says Mr Bell. 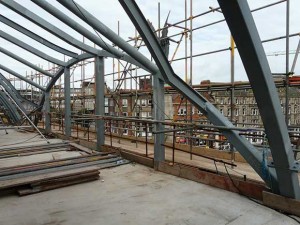 Each elevation features a large glass arch which is framed with steel. The tops of each arch are incorporated into the roof top dome and add to its complexity. The steel skeleton for the dome is supported on the top of the trusses and features a host of unique rafters. Because of the number of curves and differing radii each steel rafter is different.

“The main challenge for the dome’s steelwork were the corner sections,” adds Mr Hudson. “As everything had to be within the depth of the members we had to change some rafters to tubular sections to get a smoother profile.”

The dome’s steelwork has been infilled with timber and each wooden joist had to be cut by hand to fit exactly so that when the zinc cladding was put in place the exterior shape would be perfectly smooth.

Summing up the project, Kevin Brown Senior Partner at Reid Jubb Brown Architecture, says: “It is vital that the Hub not only proves functional, providing excellent retail and office space an easy access for commuters, but also looks the part. It certainly does all of those and adds a new dimension to the Newcastle skyline.”