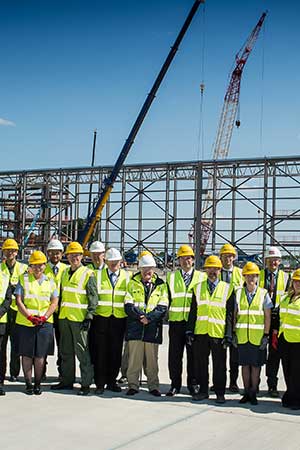 Steelwork contractor Billington Structures has installed the first truss for a £60M hangar at RAF Brize Norton that will be used to maintain Airbus A400 Atlas four-engine military transport aircraft.

Billington has now lifted into place the first of the 90t, 10m-deep primary trusses, using a complex tandem lift requiring two lattice boom crawler cranes. In total the company will erect approximately 3,000t of steel for the hangar and an associated three-storey office block.

The three-bay hangar is designed also to accommodate C17 freight and A330 personnel aircraft.

Balfour Beatty Regional Managing Director Andy Duff said: “We have extensive experience of working in the defence sector and at RAF Brize Norton. The start of the 3,000-tonne hangar and office steel frame is a major milestone on this strategically important [project]. The overall planning, design and procurement of the job are very well progressed. Hopefully the good weather will stay with us to enable rapid construction through to handover.”

Defence Infrastructure Organisation Project Manager Denis Williams said: “This is a significant project as part of DIO’s work to enhance the UK’s military capability. We are looking forward to working with Balfour Beatty and the RAF to get this new hangar ready on time and on budget.

“Given the scale of the project and the need to keep all this work from interfering with Brize Norton’s on-going operational role, the project would not have been possible without the close collaboration between DIO, the RAF, Defence Equipment & Support, Airbus Military and our contractors and their supply chains. Everyone has worked very hard to get to this stage, and we are all enthusiastic about the next phase.”