The fortress of steel 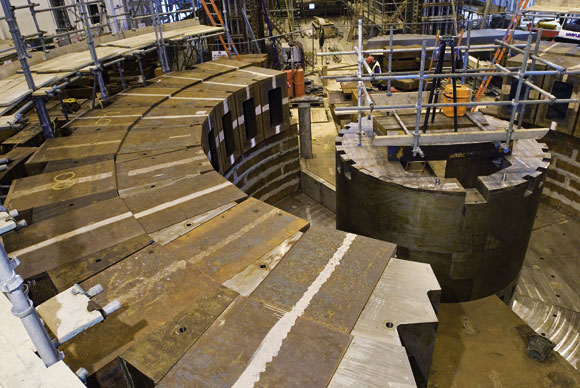 Nearly 5,000t of steel slabs are placed around the monolith to prevent radiation leakage

Five metre thick internal walls encasing a proton beam and target, and a steel frame incorporating a floor loading of 50t per square metre contributed to an extraordinary steel tonnage for a new scientific laboratory in Didcot. Martin Cooper reports.

Main client: Rutherford Appleton Laboratories
Architect: Anshen Dyer
Structural engineer: White Young Green
Shell and core contractor: Costain
Steelwork contractor for building’s frame: Severfield-Reeve
Installation steelwork team: ISIS and Corus Northern Engineering Services
Project value: £140M
Steel tonnage: 32,000t
Deep in the south Oxfordshire countryside scientists are awaiting the completion of a steel structure quite unlike any other in the UK. The ISIS Target Station 2 at the Appleton Rutherford Laboratories represents one of the largest-ever UK government funded scientific projects and it will house an array of research equipment which needs to be surrounded by 5m thick steel and concrete walls in order to contain radiation.

The project can actually be described as a steel structure within a steel structure. Sheltering the equipment and research area, the building comprises a large steel shed-like structure, which although erected in a traditional method, contains nearly twice the amount of steel required for a normal commercial building of the same size.

“There is more than 28,000t of steel used inside the structure,” says Jonathan Carkeet, ISIS Installation Manager. “Because of this we have a floor loading of 50t per square metre, which is incredible.” 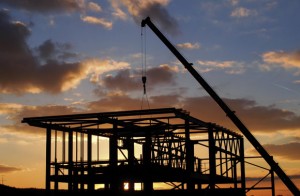 The frame housing the research facility had to take into account extra loading and consequently required 1,600t of steelwork 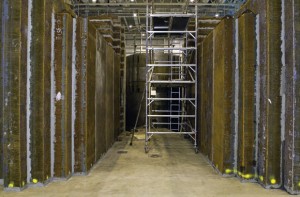 The steel encased tunnel leads directly into the monolith 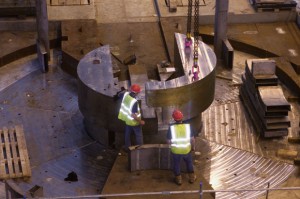 Nearly 1,000 individual steel slabs have been placed in a vast jigsaw arrangement to form the monolith 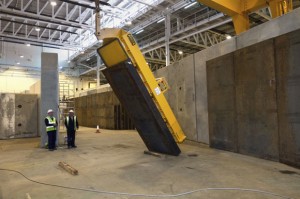 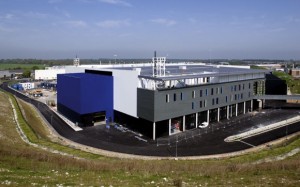 Arthur Rowell, White Young Green’s Project Engineer, explains the building’s frame may look like an ordinary shed but it had to support three internal overhead cranes, plant rooms at roof level and a lot of services, all of which added to the overall structural loading.

“The client wanted some clear open spans and to provide this we had to use some large main columns spaced at 13m centres. The building has three spans, the widest of which is 30m, so to carry services over this area we then needed a lot of supporting steelwork.”

But it is inside the structure where the majority of the project’s steel has been installed. This is to shield and encase a proton beam within a 143m-long tunnel and a tungsten target inside a structure known as the ‘Monolith’.

In summary, once the facility is up and running a proton beam will be fired down the tunnel at a tungsten target to produce neutrons which are then used in materials experiments. There is a very real chance of radiation leakage and so the tunnel and monolith are both clad in steel slab and concrete to prevent this.

Approximately 23,000t of steel has been placed around the beam’s tunnel as a protection against radiation. Incidentally, the beam itself originates from the existing ISIS spallation facility which is located adjacent to the new building. To connect the tunnel to the source of the proton beam, the tunnel had to be bored through an existing 8m-thick concrete wall.

The tunnel’s shell consists of five layers of steel for the roof and seven layers for the walls. Each layer is a steel slab, which weighs 25t and is approximately 1m thick. They were lifted into position by the facilities in-house overhead electric cranes as well as vacuum lifting equipment.

“All the slabs of steel fit together like a giant jigsaw and because the tunnel has a 45-degree bend in it, most are a slightly different shape’” comments Mr Carkeet.

At the end of the tunnel is the shielding monolith which houses the target. This structure is 12m in diameter and 7m tall, and comprises of nearly 5,000t of low manganese low cobalt steel, which was used in order to mitigate radiation problems. A further 1,000t of steel has been placed below the Monolith to shield ground water from radiation.

“The steel used for the foundation protection was from an old building on the site,” explains Dr Martyn Bull of the ISIS Communications Group. “It had been exposed to low levels of radiation in the past so re-using it for this project was a suitable and sustainable solution.”

Corus Northern Engineering Services (CNES) designed and delivered the tunnel shielding and the monolith, as well as undertaking a complete trial erection of the monolith structure prior to delivery.

“The Monolith is a complex 3D jigsaw of accurately machined pieces,” comments CNES Project Manager, Dave Gallagher. “The degree of complexity is such because there are exit and entrance channels for the beam, along with 18 ports through which instruments monitor the tests.”

CNES built the outer bulk shielding using profiled, flame cut slab or plate layered in an alternating, interlocking brick pattern. They flame cut and machined it as required to ensure structural integrity and stability, and to meet the dimensional requirements. The monolith needed nearly 1,000 interlinked steel building bricks, a third of which were made from castings and two thirds from profile cut steel slab.

Summing up the construction process, Mr Carkeet says the major difference between this project and any other is the influence of science. “The specifications of the job are extraordinary, especially the steelwork. It’s a massive undertaking and one that will have huge benefits for science.”

The first proton beam to target is scheduled to take place this month (October), but the entire installation will only be complete in early 2008, with the start of the full experimental programme due in October 2008.

What’s going on inside the monolith? 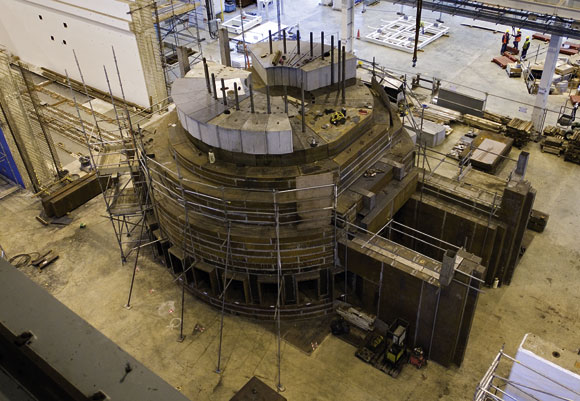 The construction of the second ISIS target station will keep the UK at the forefront of neutron research. The project will create a facility available to any organisation in the UK to examine the molecular structure inside any of its products. The results then show how good materials are at doing what they are designed to do, how they can be improved and what other properties they might have.

The station will enable scientists to make breakthroughs in materials research for projects relating to the next generation of super-fast computers, data storage, sensors, clean energy technology, and pharmaceutical and medical applications.

To create the neutrons for this research a proton beam is delivered to a target through a 143m-long tunnel. The 800 MeV beam from the ISIS synchrotron travels at 84% of the speed of light. The beam is housed, within the tunnel, in a stainless steel vacuum vessel surrounded by 35 quadruple magnets and eight bending magnets which keep it in alignment.

The beam is trained on a tungsten target which is 60mm wide and 300mm long and clad in tantalum to prevent corrosion. Each target has an approximate lifetime of five years.

Once the beam hits the target neutrons are scattered and delivered to a number of instrument tunnels, 18 in total, which surround the target’s monolith structure. When the neutrons are collected within these instruments they are used for materials research.