Commendation: The Beacon of Light, Sunderland 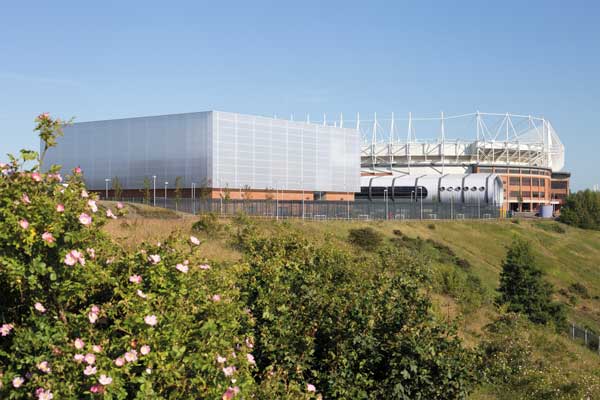 The Beacon of Light is a unique landmark in Sunderland providing educational aspiration through the power of sport.

“The box base in brick is robust and cost-effective. The upper football barn in lightweight, light-transmitting panels, doubles as a glowing beacon at night. Steelwork was a natural choice here for its speed, ability to span long distances, and aesthetic qualities in the exposed areas.

“It proved the ideal solution to articulate a simply detailed floating structure over the brick box below. Ultimately, the simplicity of the concept and materiality have combined with great effect to harness the life-changing power of sport.”

Overall, the project is a combination of a school, offices, a 12-court sports hall that doubles as a 3,000-seat performance venue and an indoor football pitch on the roof.

s h e d Director Marc Horn says: “Early in the design concept we decided that a steel frame would provide a flexible solution that would allow the design to develop right up to the start on site. Without the steel frame the project would not have been affordable, nor would it have been as dramatic and elegant.” 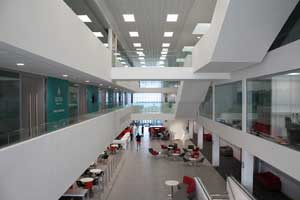 Using a steel frame allowed the project team to design and specify steel driven piles that prevented any potential legacy contamination being brought to the surface. This also kept the amount of piling to a minimum, thereby reducing the environmental impact and allowing the M&E flexibility by creating clear soffits in the main service run directions.

There are a lot of trusses in this project and the uppermost and longest ones, at 60.5m-long, are the nine that form the Beacon’s roof, creating the open column-free space for the third-storey football pitch.

The trusses are 4.1m-high and weigh 13t each. They needed to be brought to site in three pieces and were erected individually using Harry Marsh’s on-site mobile tower crane.

Moving down the structure, another two series of trusses were required to create the column-free space for the multi-use sports and performance hall, as well as the areas that overlook it.

Spanning a distance of 34.7m and each weighing 13.7t, nine 4m-high trusses form the hall’s roof and support approximately half of the floor for the football pitch above.

These trusses are supported at one end by the building’s perimeter columns, and internally by another series of three spine trusses.

The storey-high spine trusses are positioned in a row, at second floor level, across the building’s width, effectively forming the demarcation between the sports hall and the teaching zone.

The judges say a new landmark in regenerating Sunderland, this glowing cube of a building, a home for the Foundation of Light, is a community supported combination of school, sports halls and 3,000-seater performance venue.

It even includes a covered football pitch on the roof. The steel frame economically resolves structural challenges from foundations to its 60m × 60m clear span fabric roof.