Terminal checks in with steel

November 15, 2012 by NSC in Projects and Features, This month's featured stories 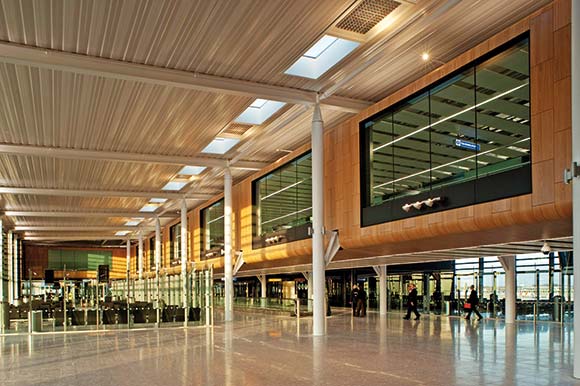 Steel construction has come to the fore, above and below ground, during the building of a satellite pier at Heathrow Airport. Martin Cooper reports.

The construction of satellite pier Terminal 2B (T2B) forms part of a multi-billion pound investment programme under way at Heathrow Airport.

The overall scheme will radically improve and alter the layout of Britain’s busiest airport and includes the construction of the new Terminal 2A and a multi-storey car park.

Balfour Beatty is managing the design and also constructing Satellite T2B, which is 522m long and set to fully open in 2014. It will have 16 long haul stands, 10 of which are sized for the new double decker A380s.

The T2B project is being delivered in two phases in order to ensure the airport’s operation is not interrupted. Phase I opened in 2010 and delivered six new stands, the more complex Phase 2 – currently under construction – will open at the same time as the main Terminal 2A in two years time.

“The plan was to have the six stands of Phase 1 delivered well ahead of the Olympics,” explains Rohit Patel, Balfour Beatty Engineering and Design Director. 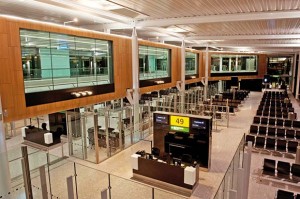 Phase one of the programme opened in 2010

At the moment, the functioning stands are connected to the existing Terminal 1 via a footbridge. Once the scheme is completed, this structure will be demolished and satellite pier T2B linked to Terminal 2A initially via a passenger tunnel, and then a track transit system.

Phase 2 construction work was begun by main contractor Balfour Beatty during October 2010. Work on this part of the pier was then split into three phases, with the north and south portions of the building being constructed with a top-down method which allowed for an early start on the superstructure.

The central part of the pier is being built from the bottom up, providing for the earliest completion of the critical path subsurface plant rooms located in the basement. 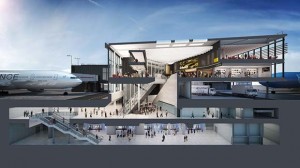 The basement is large and measures 360m long, 60m wide and 15m deep. As well as providing space for plant and communications rooms for the pier, it will connect into the passenger tunnel and provide access into the pier.

Steelwork has played a key role beneath the surface as well as forming the pier’s superstructure main frame. For the top-down process, 160 plunge columns have been installed, all fabricated from recycled steel. The columns are 20m long sections, and each member is supporting up to 20MN.

“By installing plunge columns the basement excavation could proceed, in two areas, simultaneously with the steelwork erection above,” adds Mr Patel.

Co-ordination between trades, excavation, concreting and steel erection, has been a key issue on the project.

The steelwork frame of the pier consists of three basement levels and four levels above ground topped with a steel roof.

“This speeded the job up and meant we’d completed the three phases – totalling 5,000t of steel – in nine months.”

“We’ve worked hard with the architect to refine the steelwork details to form sculptural shapes and to reduce the visual impact of the building,” says Eric Li, Mott MacDonald Project Structural Engineer. 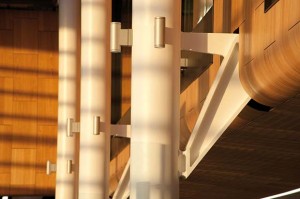 Bespoke wishbone connections have been included throughout the steel frame

The most striking and noticeable architectural steel features are the series of internal CHS columns with bespoke connections that form the Departures and Arrivals halls.

The columns stand the full height of the building and have a pencil point connection at the top and a wishbone shaped connection further down that supports the pier’s second floor.

The steel main frame is based around a regular 12m by 9m grid, which incorporates two lines of internal CHS columns. Cellular beams have also been used within the structure, not to carry services, but again to aid the desired airy ambiance. 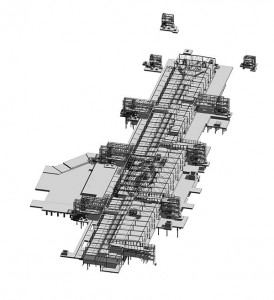 Stability for the steel superstructure is entirely derived from bracing, some of which would usually be located along the façades.

However, as the design of a light filled structure incorporates glazing along most of the elevations, alternative locations for bracing had to be found, locations where it would not intrude on the glasswork.

The solution, as Hani Salaytah, Balfour Beatty Structural Steelwork Area Manager explains, was to use the aircraft boarding pods located along the structure’s elevations.

“There are seven of these structures and they are heavily braced, acting like cores and supplementing the bracing within the main part of the building. and we had to use a large amount of temporary bracing until they were complete.”

Future-proofing is also playing a key role in this construction scheme. The underground walkway will eventually be kitted out with an underground railway which, as a well as linking 2A with pier 2B, will also then connect to future Terminal 2C. Groundwork is already being prepared for this next steel framed project as part of Balfour Beatty’s T2B works.

Construction work on a functioning and busy international airport brings a host of unique challenges. Security is obviously an important issue and all workers and goods are routinely checked in and out of the Terminal 2B site.

On the flip side of the coin, one of the site’s advantages is the lack of restrictions on night time work and consequently a 24-hour working cycle is possible. Most of the steelwork erection has been carried out at night, following on behind the groundwork and concrete slab teams which work during the day.

Surrounded by Heathrow Airport’s busy activity, the site is very constrained and space for materials storage is at a premium. Off site construction has been used on this project to ease congestion. One of the large off site elements, a steel framed plant room for the pier, was fully assembled on the edge of the airport and then transported to the site during an 18-hour procedure.

The plant module weighed 100t (200t including the temporary works) and was moved across the airfield using multi-axle transporters that jacked the unit into place when it reached its final position.

The pier has a total of eight 12m high steel services risers, all of which arrive on site fully kitted out and ready for immediate installation, again saving time and lessening the need of on site work and space.

The project team has made use of steel with innovative and safe working methods for this complex terminal structure. 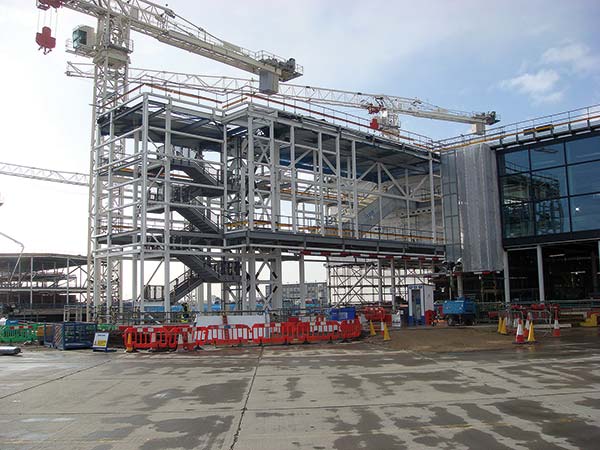 In the UK, the lateral stability of a large proportion of low  to medium rise buildings is provided by either concrete cores or steel bracing systems. These bracing systems allow the use of ‘simple’ construction techniques, where connections between beams and columns are nominally pinned. This type of construction is typical for many commercial buildings.

For airport pier buildings, owing to the open plan nature of the building interior and the extensive use of glazed façades, there is less opportunity for these traditional types of vertical stabilising elements to be easily integrated within the building. More unusual solutions to provide stability have to be considered.

For the first phase of the Heathrow Terminal 2B development, the building design and construction philosophy was to use a mixture of diagonal bracing up to first floor level and steel frames with moment resisting connections above. The transverse stability of the terminal building (across its 34m width) was achieved by portal frame action at the mid column height within each bay of the main building frame. However, the high stresses on the tubular steel sections required the use of thick walled, special order sections to accommodate the connection forces and provide the required lateral stiffness.

For the second phase, which quadrupled the length of the pier, Mott MacDonald, who undertook the civil, structural and infrastructure engineering services, adopted an alternative scheme to laterally stabilise the pier superstructure, utilising the lift cores within the external pier gate extensions, known as the Vertical Circulation Cores (VCC’s) to provide the transverse lateral stability. The VCC’s protrude from the main body of the terminal building at approximately 90m intervals along both sides of the pier; they allow the boarding and disembarkation of aircraft passengers. The VCCs are connected to the main building by steel trusses and composite floor slabs. In conjunction with a series of braced bays at roof level and the diaphragm action of the composite floor slab at first floor level, the VCCs provide lateral stability across the width of the pier, between movement joints which occur at 90m centres. The use of the alternative stability system allowed the internal columns to be fabricated from standard hot rolled sections and significantly increased the piers structural efficiency.

Longitudinal stability is provided by diagonal bracing, situated around the building perimeter, hidden behind solid façade panels for the small service risers on either side of the VCCs. This bracing typically consists of tubular steel members arranged in a K configuration.