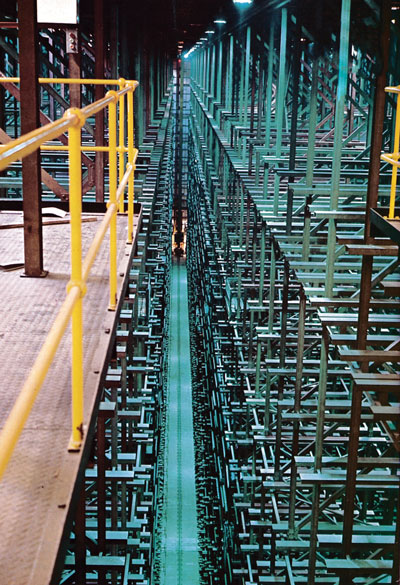 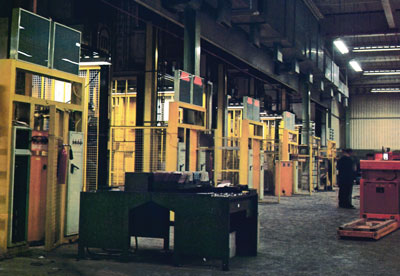 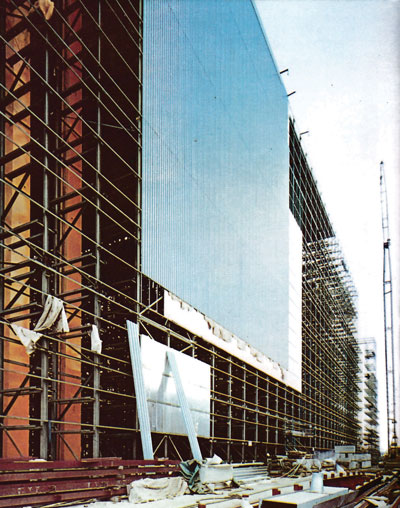 Insulated cladding being fixed to the side. The outer layer consists of Colorsteel PVC coated galvanised steel sheet 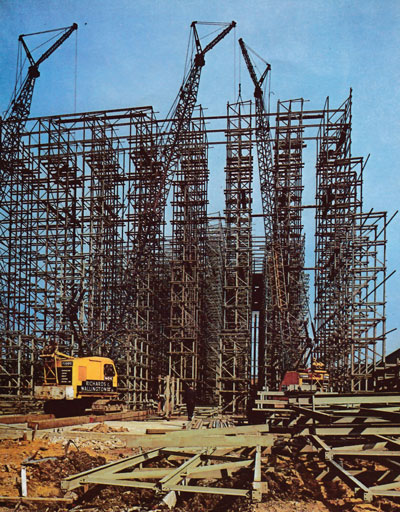 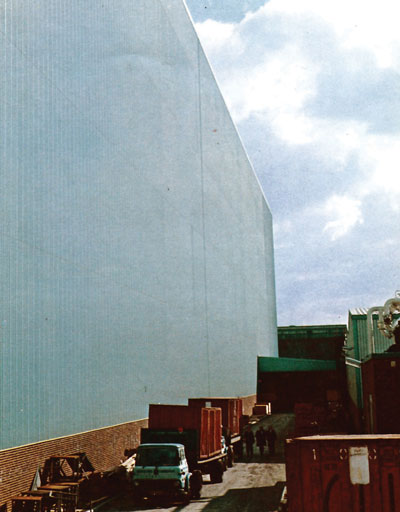 Finished view of the building in which no windows are necessary

The high cost and scarcity of land have led to the development of Highbay storage systems. R. Dunning, CEng, AMIStructE, Senior Structural Engineer, Storage and Materials Handling Division, Dexion Ltd, here describes a new warehouse for the Fold Motor Co in which over 20,000 tons of goods can be stored.

Dexion Ltd became established as the foremost producers of slotted angles in the world. This product is still as useful as ever and millions of feet are made every year for home and export. However, all products have their limitations and there are some storage jobs for which lightweight angles are not really suitable. Dexion Ltd, recognising that their business was not so much as slotted angle manufacturers but more as storage specialists have long now offered several highly developed storage systems on the market. Most recent of these is the Highbay system.

Basically the problem is that the cost of land is ever increasing and in some areas the shortage is desperate. In addition it is vitally important for stores to be as efficient as possible as obviously all time spent fetching goods is non-productive and should be reduced to a minimum. Similarly the more a system can be automated the faster and more efficiently it can operate.

The only way to save on land is to build high – as high as other limiting factors such as foundation conditions, wind pressures, efficient operation of cranes, town planning and costs will permit. The best way to save in operating time is to have powerful cranes to fetch the goods and working in a layout presenting no obstructions to movement.

These features have been brought together in the Highbay system designed and built by Dexion. One of their contracts using these new techniques is for Fords of Dagenham. Highbay warehouse, also known as ‘Pallet Silos’ were first developed in the USA and are now spreading into Europe. Basically they consist a number of parallel pallet racks separated by narrow aisles in which the stacker cranes operate. There is no building in the traditional sense of the word as the roofing and cladding is simply attached to the tops of the columns and the outermost racks. Clearly the aisles should also be as narrow as possible and the stacker cranes are designed to operate within these narrow confines and at a high level.

The Highbay warehouse at Fords is 131 ft wide by 560 ft long while the height is 110 ft to roof level with a further 2 ft for the parapet. The racks occupy 507 ft of the length and are so arranged as to provide a crane maintenance area at the western end and a 106 ft pallet marshalling area at the east in a low single storey building. Altogether more than 3,000 tons of structural steel has been used, most of it being mild steel and the remainder high tensile. The ground is of a poor nature in consequence of which every one of more than 1,000 columns has an individual pile foundation.

There are eight parallel racks, six of which are double entry, while the two outer racks are single entry and also carry the steel sheet wall cladding. All the racks assist in carrying the roof. In addition to carrying pallets the side racks are 7 ft 6 in wide in order to resist wind loads. The internal racks are 8 ft wide and give support to the sides through the roof beam. This beam is a 7 in × 4 in RSJ and not only ties the tops of the frames together but also acts as the support for the lightweight concrete roof slabs.

There are 17 levels of pallets each of which can weigh 1 or 2 tons. Five types of pallet are stored, three are large and weigh 1 or 2 tons, while two are small and weigh 1 ton. The small pallets are stored side by side in the same space as occupied by one large pallet but since they cannot span the distance between the cantilevered pallet bearers they can only be accommodated in spaces provided with support grillages which occur at three levels.

Cantilevered brackets are provided in ordered to keep the height of the building to a minimum by recessing them into the underside of the 8 in × 3 in channel pallet bearers. This system enables the crane forks to operate within deeper clear vertical spaces than would be the case with cross beams. The only interruptions come from lateral restraints which are connected to the spine bracing which resists longitudinal wind and crane buffering loads. For efficient working, tolerances had to be very fine for structural steelwork and were ⁺₋⅜ in. in any horizontal or vertical plane for height, width and length of the building and local deviation not to exceed ⁺₋⅛ in. in 20 ft. This degree of accuracy led to the decision to employ bolted construction to avoid any possible difficulties from distortion caused by welding. High strength friction grip bolts were specified but as they were difficult to obtain in ½ in diameter size it was decided to use Huck Bolts for shop fabrication while the ½ in HSFG bolts were employed on site with load indicating washers. The stacker cranes themselves are considerable structures as they have to pick up two tons and be capable of placing it at any height up to nearly 100 ft and to place it accurately.

The crane consists of two 160 ft high masts connected together at the top and bottom and running on a single flat bottomed rail. Overall height is 109 ft. The top is restrained by horizontal guide wheels running on either side of a rail on one side of the aisle, while the bottom is retrained by horizontal wheels running against the rail. The lift platform moves between the masts while the pick-up forks can exit left or right. Total weight of each crane is about 30 tons and there is one to each of the seven aisles. They may be operated manually, by punched cards, or by computer. Maintenance is required at ground level for the motors and running gear and at a high level for the guide wheels for which a number of platforms, reached by stairs, are provided at 101 ft level.

As yet a young industry in the UK there is no doubt that Highbay storage is going to be more essential as land becomes even more costly and as storage itself becomes increasingly computerised. This is a highly specialised business where expertise in materials handling is vital to success. With its many years of experience in this specialized field Dexion should be well to the fore in this important business.