Student investment the key to the future 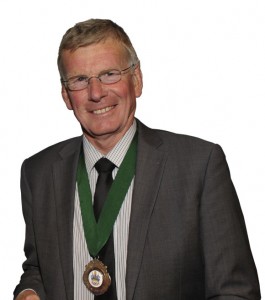 It took the pain of a gruelling hike across Dartmoor with a full pack on his back to make the 16 year old Roger Plank decide to study mathematics and physics rather than modern languages; which has been immensely to the benefit of structural engineering.

Roger is now several months into his Presidential year at the Institution of Structural Engineers, having recently retired from full time academic life after a career mostly spent at Sheffield University, where he and the Department of Civil and Structural Engineering played a significant role in the development of steel construction design over the past 30 years or so. He cites the collaborations between the department and the steel sector as one of the major highlights of his successful career.

‘I was doing the Dartmoor hike as part of my Duke of Edinburgh award and it was a good opportunity for thinking about my future,’ he remembers. ‘Languages had looked like the most likely course for me to take as I was studying French, German and Russian and enjoying it. But I realised that I liked mathematics even more and there were more career opportunities, so the decision was made.’

From there it was a short step to discovering an interest in applying maths to model real behaviour, which led to a choice of engineering as a career. ‘I’m not one of those engineers who spent hours as a child playing with Lego or Meccano sets,’ he confesses. ‘Interest in engineering grew from an interest in maths and physics.’ The great outdoors once again played a key role in his career choices:’ I found that I liked mechanical as well as civil engineering, but civils meant that I might be outdoors a bit more, which was what I wanted.’

The influence of inspirational teachers while studying at Birmingham University, where he eventually took his PhD, led him towards structural engineering, and also towards an academic career. ‘I felt more comfortable with the structures stream, it seemed to me to be a more pure discipline whereas I always felt that there were more fudge factors in fluid dynamics.

‘The high profile projects always seemed to involve structures, either buildings or bridges, so it seemed an easy choice.’

A short period in practice with a small Birmingham consulting engineer was time well spent. ‘It was a fantastic experience. We were involved with small projects but the variety of experience was excellent, involving all aspects of design and all stages of the construction process. It was ideal. Had I been on a big project I would probably only have experienced one small aspect of it.’

Roger joined Sheffield University in 1976 as a lecturer in a department that was already strong on the structural use of steel. By the time he retired from his post as professor last year the department was one of the biggest and liveliest in the UK with close ties to industry, particularly the steel industry. British Steel, and later Corus, sponsored two teaching posts as well as a Chair in Structural Engineering and Architecture, which was occupied by Roger.

Structural fire engineering soon became his principal interest, following a meeting with Jef Robinson, a metallurgist from British Steel, who challenged the traditional approaches which today look expensive and time consuming. ‘Great advances have been made in this area and we have come a long way from what was the traditional approach 30 years ago,’ says Roger, helped in no small part by the research undertaken by him and his students over the years modelling structural response to fire. ‘New design methods mean that the amount of fire protection can be significantly reduced, and it can be easily applied offsite during fabrication.’

Significant knowledge was gleaned from the Cardington programme of large scale fire tests which Roger was closely involved in planning. Data was used to validate design models and subsequently used to develop Vulcan fire engineering software which is in widespread use today. Although structural fire engineering is well appreciated for use on large projects, Roger says there is potential for a lot more use of it on smaller projects where a prescriptive approach still prevails.

Future research might also focus more on sustainability he suggests, as developers and other building owners come to realise that it is a market opportunity rather than a cost. ‘There is still a lot of confusion on sustainability though and a lot of work needs to be done.’

A post retirement career in consultancy promises to keep Roger busy after what will be an extremely busy year as President of the IStructE. He has several themes to pursue during his Presidential year. A key message is that the future depends on investments made now in young engineers, and Roger stresses the importance of getting the right messages across to students. ‘One of the things we did successfully over the past 30 years or so was to focus on undergraduates, making sure that teaching materials on the structural uses of steel were widely and easily available.

‘If I had a single message for the industry then that is it – make sure that you maintain your investment in students. That is what has been done over the past 30 years and it has certainly paid dividends for the structural use of steel.’ 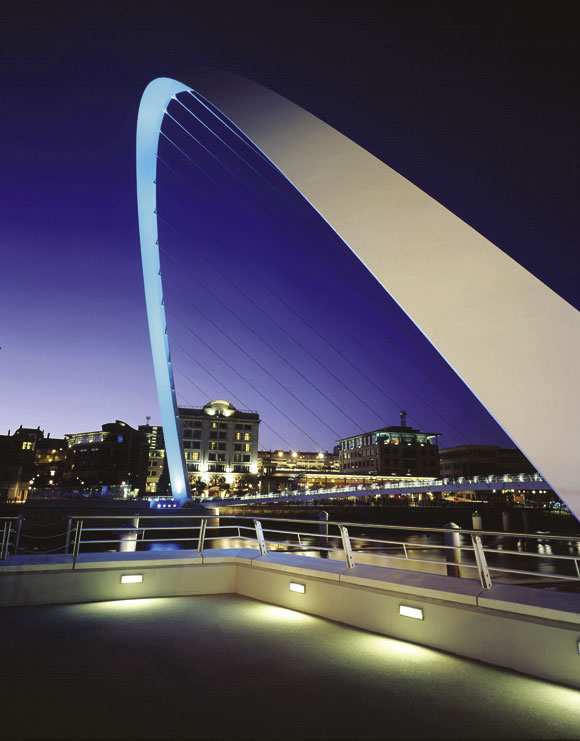 Not surprisingly perhaps, a list of favourite structures is topped by three significant steel projects – two buildings and one bridge.

No 1 Finsbury Avenue, on the western edge of the Broadgate development in the City, is widely acknowledged as a trailblazer of its day, built in the early 1980’s. It incorporates several structural innovations; it has a full height central atrium and was the first composite floor steel framed building in the City. Unusually for the time, a trial erection was undertaken to ensure that work would proceed with minimal risk of delay on this high profile, developer funded project.

Waterloo International Station (below), opened in 1994 but not used as a railway terminus since 2007, is another favourite which was hailed as a monument to a new railway age of cross channel rail travel. The future of the structure is uncertain but the engineering and architectural achievement remains. Its most striking feature is the glazed train shed roof which rises more steeply at its western side to accommodate the height of the trains. 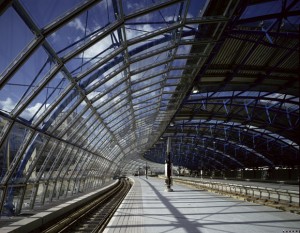 ‘They prove the value of investing time and money up front in planning and design and in thinking about how best to build a structure,’ says Roger.

The Gateshead Millennium Bridge (designed by Wilkinson Eyre and pictured above) over the Tyne is his bridge choice, the twin 100m span steel arch structure with its famous opening ‘eye’ being nothing if not iconic. Its deck is a stiffened steel box suspended by steel cables from a parabolic steel arch.

It represents a unique collaboration between architect and engineer to provide a visually striking and innovative engineering achievement. ‘It is elegant and ingenious engineering, adding to its environment in a very positive way,’ he says.