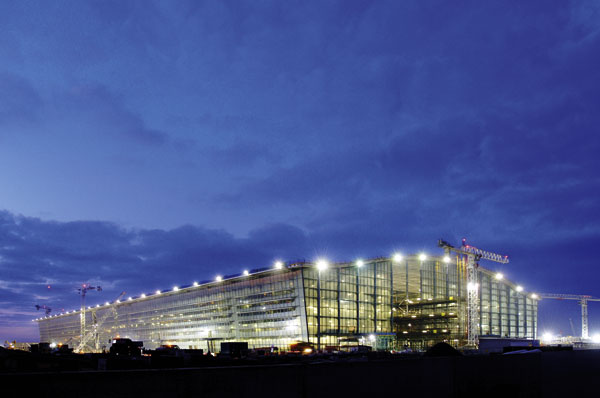 Since the Structural Steel Design Awards were initiated 40 years ago by Dr Finniston many changes have taken place, both in the steel and in the construction industries, but one asset remains unaltered.  It is the way in which steel not only confers efficiency and economy but also has an aesthetic which designers are able to exploit to the considerable betterment of the environment.

Steel continues to be the most popular frame material and the entries reflect the increasingly high standards that are being achieved, not only in design and all aspects of fabrication, but also in the short programmes and accuracy on site.

In varying proportions, the qualities of engineering excellence, innovation, attention to detail, economy and speed of construction have been brought together in each of these successful structures,

It is hoped that the Design Awards will continue to stimulate interest, and contribute to the growth of steel-framed construction. 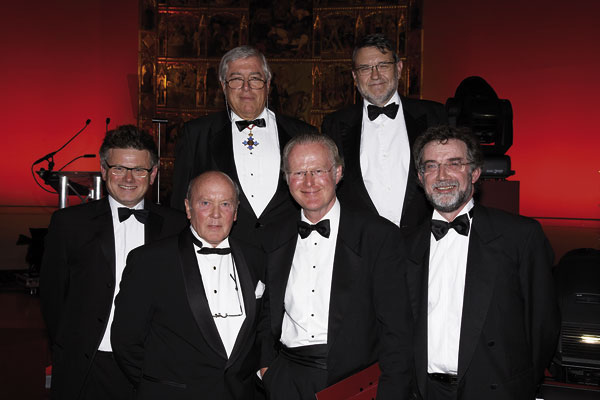 Chairman of the Structural Steel Design Awards judges David Lazenby CBE (back row, left) had a distinguished career as a consulting engineer before taking a new turn in the late 1990s to give British Standards new focus and direction. He also led the huge pan-European exercise to develop the Eurocodes, as Chairman of the lead European committee. David Lazenby’s career began with Balfour Beatty in 1959. In 1964 he moved to consultant Andrews Kent & Stone, where he stayed for over 30 years and became managing partner and subsequently a director. In 1990–91 he was one of the youngest ever Presidents of the Institution of Structural Engineers. In parallel he had become involved in developing codes and standards, advancing from technical committees and sector boards to become a non-executive director of BSI Group.In 1997 he became the Director of British Standards, one of three executive directors  responsible for over 5000 staff in 100+ countries, and a budget of £300+M. His experience both as a user of standards and as a committee and board member helped him to bring a new focus on market relevance and he is credited with bringing global success to the organisation. Establishing it as a world leader in its field, as well as making it profitable, has been almost unique among national standards bodies. Since 2003 he has operated his own consultancies, Eurocode Consultants Ltd. and DWL Consultants Ltd.

Martin Manning (back row, right) is a Director of Ove Arup and Partners which he joined in 1968 on graduation. He has worked in Arup offices in London, Zambia, Tehran and Hong Kong and on projects around the world. Recent projects have included new terminal buildings at Chek Lap Kok, Zurich and Beijing Airports. He is currently working on Abu Dhabi Airport and a large mixed use development in Seoul. He is the current Chairman of SCI, a Member of The Institution of Structural Engineers and a Fellow of the Royal Academy of Engineering.

Gerry Hayter (front row, right) has spent his career in transport, mainly in London. He joined London Underground as a civil engineering graduate in 1975, working on the design of railway bridges, lifts and stations. After 10 years he joined the Bridges Engineering Division of the Department of Transport where he developed new standards for the design, assessment of highway bridges and structures for 40 tonne lorries. In 1994 he joined the London Network Management Division of the Highways Agency, responsible for the maintenance of highway structures in West London. A number of senior technical posts at the agency followed, culminating in his present position as Group Manager of the Research and Standards Management Group, with responsibility for the development of the Agency’s £13m research programme.

Christopher Nash (front row, left) is Managing Partner of Grimshaw. He graduated in 1978 from Bristol University School of Architecture, and joined Grimshaw in 1982. As an architect he was responsible for many of the practice’s high profile buildings. These include – from his early years – the Financial Times Printing Works in London’s Docklands and the British Pavilion for the Seville Expo 92, The Western Morning News headquarters in Plymouth, the RAC Regional Headquarters in Bristol and many other projects. In his current role, Chris is responsible for the strategic planning of the firm’s worldwide business and for ensuring the practice delivers such high profile and diverse projects as BAA’s Stansted Airport Generation 2 Masterplan, Phase V of the Eden project and the Cutty Sark conservation project.

Joe Locke (front row, second from left) retired in 2004 from his position at William Hare, where he was responsible for the engineering aspects of the company’s activities and also Executive Director of subsidiary Westbury Tubular Structures; having previously retired in 1998 as Chief Executive Officer of Watson Steel. Joe was an apprentice with Watson and sat his associate membership of the Institution of Structural Engineers at only 23. Joe worked at home and overseas on a considerable number of high prestige contracts, including Sellafield nuclear power station’s massive thermal oxide reprocessing plant and the terminal building of Kansai airport, Japan. Joe Locke was awarded an MBE in 1990 for his contribution to the structural steelwork industry.

Architect and planning consultant Robin Booth (front row, second from right) graduated in architecture from Cambridge University and has a Master’s in Urban Design from Edinburgh University. He has been Project Architect and Partner in charge of prestige projects like the Standard Chartered Bank headquarters and has maintained a career long interest in town planning. He has experience in the public and private sectors, on a wide range of projects from local authority and student housing to leisure and corporate headquarters buildings, and also on urban regeneration sites. He was Partner and then Director with the well known architectural practice Fitzroy Robinson Limited from 1980 to 2001 and subsequently Architect Director of Building Design Partnership, London Corporate Group. He is currently working on his own as a Planning and Architectural Consultant.