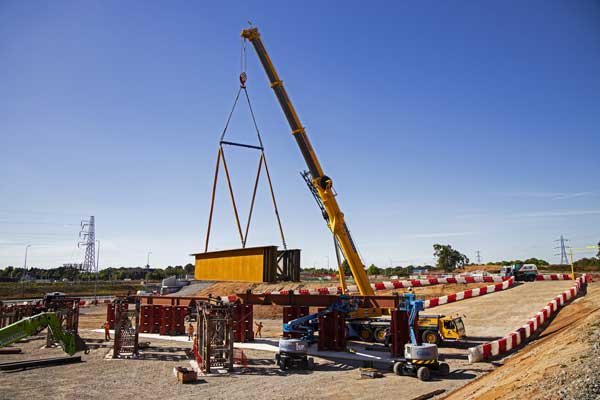 Cleveland Bridge has produced twenty-four massive steel girders that will form part of the first bridges to be built on the HS2 project.

Sixteen of the 20m-long girders have been pre-assembled at Cleveland Bridge’s factory into 50t pairs in order to minimise the number of deliveries to site.

Specialist haulage equipment transported the girders to the site, where they are being assembled in a purpose-built area using 8,500 high-strength bolts, to make a 65m-long single span.

The assembled bridge steelwork, which will span the M42, will work in conjunction with a composite concrete deck to provide the overall bridge structure. Once the fully-decked bridge has been completed, this 2,750t structure will be moved into its final position over the motorway.

All of the bridges are being constructed near the site of the new HS2 Interchange station, forming new connections to a triangle of land formed by the M42, A45 and A452. They are the first permanent structures to be built by HS2 and will span the M42 and A446 respectively, with a further two bridges to take roads over the new high speed line. They are part of a remodelling of the road network in the area to divert the roads out of the way of the new HS2 line and at the same time connect the current road network to the new station.

Chris Droogan, Managing Director of Cleveland Bridge UK, said: “We’re incredibly proud to play a part in the delivery of the UK’s largest infrastructure project and this is a significant addition to our track-record for producing structures for iconic developments around the world.  It reflects our strategy to maintain our position at the heart of the development of major infrastructure, which utilises our extensive facilities and the capabilities of our highly-experienced workforce, while creating opportunities to develop future generations through our award-winning apprenticeship programme.”

Bill Price, HS2’s Head of Enabling Works, said: “It’s fantastic to see construction work stepping up a gear on the first permanent structures to be built by HS2, and to see how this work is creating jobs and opportunities for people right across the country.

“These highway works are a major project in their own right, involving construction workers, specialist engineers, designers and project managers. We’re utilising cutting edge technology and world-leading construction techniques such as this modular bridge design, to deliver the highest level of quality and efficiency as we build Britain’s new railway.”