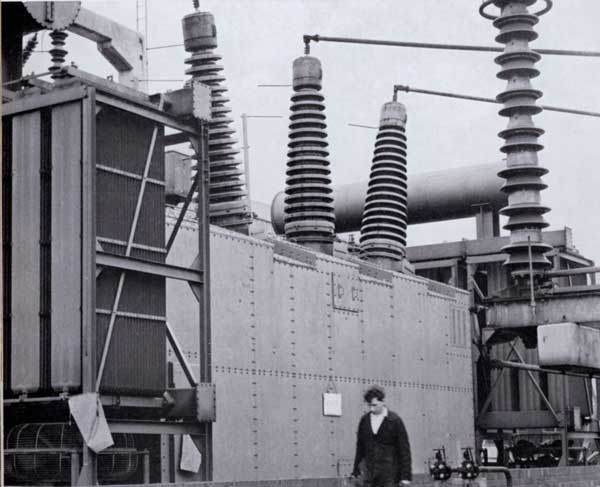 Here the transformer has been provided with its noise-reducing enclosure.

One of the problems associated with modern power transformers is the noise they produce. The shortage of available land for power station and substation sites frequently requires transformers to be located close to residential property, with occasional justifiable complaints from nearby householders.

The noise is produced in the magnetic core and is difficult to suppress at the source because of the magnetic requirements of the transformer. Though much research is being undertaken to investigate methods of reducing noise at the source the possibility of success in this direction is as yet remote. It therefore becomes necessary to reduce the volume by building noise reducing enclosures around the transformer. 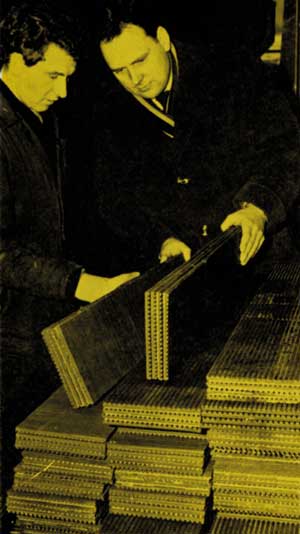 Ground-bourne vibration is one source of noise and to reduce this transformers are mounted on pads consisting of rubber sandwiches (seen above) bonded to steel plates. 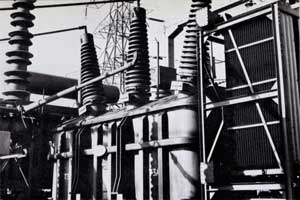 One of the four 180 MVA auto-transformers before enclosure by its steel hood to reduce the noise from its magnetic core. 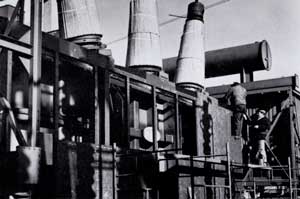 Building the steel framework for the acoustic hood. Special precautions were taken to avoid damage to the insulators. 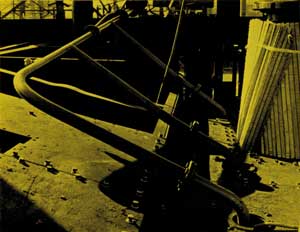 To prevent the escape of noise through openings where pipework passes through the hood, the pipes were isolated from the latter by large-diameter holes which were then sealed with special rubber bellows.

Popular materials for such structures are brick, concrete and steel. Brick and concrete, though often used, both have the disadvantage of not being readily demountable and thus if it is considered that there is the possibility of the transformer being removed at a later date it becomes necessary to use steel. Another problem is the electrical requirements of the high voltage bushing connections. It is essential that the correct clearance from the high voltage point to earth is maintained and consequently it is found impossible on some existing transformer designs to fit concrete roofs over transformers and still maintain this clearance. Steel enclosures, however, can be readily shaped to follow the contours of the transformer tank. Furthermore, the dimensions of any enclosure relative to the transformer tank are important because coincidence with critical wavelengths of sound will cause resonance: it is found easier to avoid these critical dimensions with steel.

Examples of Steel Technique
Four large transformers of 180 MVA rating have been enclosed in this manner. These transformers were of an older design and had the L.V. bushings fitted close to the transformer tank. A close fitting roof section of a suspended portal type design was used. This suspended structure was 25 ft in length and weighed 8 tons. A heavy universal beam running the length of the enclosure and situated above the on-load tap changers served as the main portal beam. The main roof supporting structure was made with small channels and the roof and wall cladding superstructure with tees.

The wall cladding used was of special design which produced a damped panel, that is a panel which will not ring when it is struck. This damping is essential in noise attenuation work where mass alone (as with brick and concrete) cannot be used. The cladding consisted of two 1/8-in thick plates with a sandwich filling of viscous compound. This compound, used in AEI acoustic hoods, is a plastic compound capable of withstanding wide variations of temperature with negligible variations in viscosity. The main cladding was made in 6 ft by 3 ft panels.

Openings in enclosures can permit noise leakage and reduce the hood efficiency and ventilation ducts and access doors are very carefully designed to avoid such leakages. In this instance the steel doors were damped in the same manner as the main cladding though a heaver, shaped construction was used. Sealing of the edges was achieved with rubber strip. All pipe connections were given adequate clearance through the hood and sealed with special convoluted rubber bellows.

The hood and its superstructure were treated against corrosion; the framework and plates were shot blasted and coated with micaceous oxide before the coats of conventional paints were applied. Other anti-corrosive treatments can be used however, for example metal-loaded epoxy resins.

Attention was paid to the reduction of ground-bourne vibration by fitting anti-vibration pads under the transformer. On this particular site this necessitated lifting the 200-ton transformer and inserting anti-vibration pads underneath before the erection of the enclosure took place. In order to avoid the lifting problem should it later become necessary to take sound-reducing measures, it is becoming common practice to fit such pads when a transformer is installed.

The quickly assembled steel noise enclosure is becoming a popular choice on many sites and work is in hand to apply this sort of acoustic hood to transformers of much larger rating and size. An alternative steel application likely to be used frequently is the close fitting ‘curtain’ enclosure which is built onto the transformer in the factory.