Steel takes to the stage

July 9, 2019 by NSC in Projects and Features, This month's featured stories 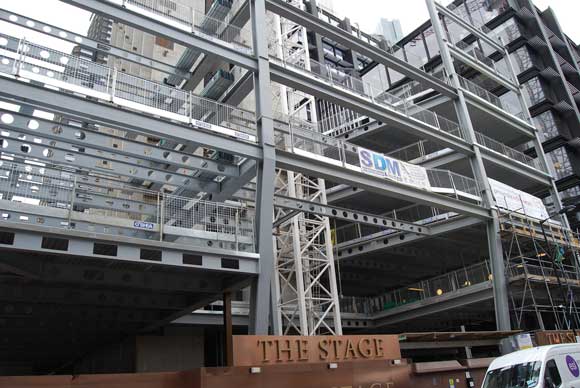 A steel-framed commercial building forms one of the main elements of £750M mixed-use development in Shoreditch that also includes the remains of a Shakespearian playhouse. Martin Cooper reports.

FACT FILE
The Stage, Shoreditch, London
Main client:The Stage Shoreditch Development
Architect: Perkins + Will
Main contractor: CJ O’Shea and Company
Structural engineer: Walsh Associates
Steelwork contractor: SDM Fabrication
Steel tonnage: 1,267t’All the world’s a stage’ wrote William Shakespeare and whether one agrees with this or not, one area of Shoreditch is now very much a stage.

Located in an area that is not immediately associated with dramatics – being a few miles east of the capital’s main theatre-land in the West End – The Stage development in Shoreditch is named in honour and shares a site with the remains of the Curtain Theatre (see box).

During its heyday, the Curtain is said to have been the venue where Shakespeare’s Henry V debuted, and as a nod to the playwright, one of the scheme’s commercial blocks (Building 3) has been named The Bard.

This is one of two office blocks within The Stage development, the other being a smaller concrete-framed structure named The Hewett.

Situated between these two buildings is the main archaeological plot where a museum is going to be built to display artefacts found on the site. The Stage’s other structures include a 37-storey residential block, restaurants and an art gallery housed within a former railway viaduct.

The Bard is a 12-storey steel-framed block, which will provide 12,700m² of contemporary offices along with large west-facing terraces.

Working on behalf of main contractor CJ O’Shea, SDM Fabrication is fabricating and erecting just over 1,200t of structural steelwork for the project.

“Logistics is the biggest challenge on the project, as we have a number of buildings under construction at once and just one entrance serving the site,” says CJ O’Shea Project Director Fintan Hallihan. 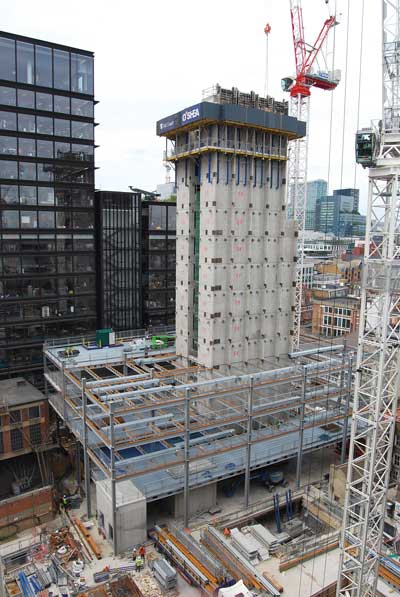 The steel-framed office takes shape around its centrally-positioned core 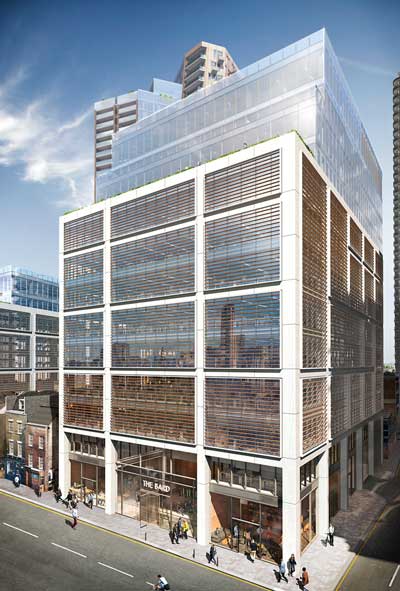 How the completed Bard building will look

“The advantage of using steelwork for The Bard is that all material is delivered on a just-in-time basis as there is no room for storage.”

The building has a composite design, with steel beams supporting metal deck flooring and a concrete topping. Composite Profiles is supplying 15,000m² of Tata Steel’s ComFlor 51 for the project along with 45,000 shear studs.

Measuring approximately 45m-long x 31.5m-wide, the building is based around a centrally-positioned concrete core, which provides the steel frame with its stability. Radiating out from the core on a 9m × 9m column grid pattern, the majority of the frame’s beams are bespoke Westok plate girders.

The girders are 9m-long x 500mm-deep with a variety of flange thicknesses and weigh 1t each. They all have an array of apertures to integrate the building’s services within their depth.

“Bespoke plate girders were chosen as an efficient method for spanning the internal areas,” says Walsh Associates Director Peyrouz Modarres. “Although more fabrication is required, the girders gave the project a saving on the overall steel tonnage.”

Sat on top of a two-level basement, the steel frame begins at ground floor podium level. This lowest level is a double-height space accommodating car parking and areas that could be used as retail units.

The main entrance foyer is a double height area, with the first-floor set-back to form the higher space. Two raking columns are positioned either side of the entrance, supporting the underside of the second floor.

“There are two utility obstructions below the entrance and columns could not be located in their intended design locations,” explains SDM Fabrication Director Richard Melton. “Steelwork’s flexibility allowed us to install two raking members, which had to be temporarily propped until the frame was sufficiently stable.”

From floor two up to floor eight, the floorplates offer 1,170m² of office space, but above this the building steps in to form two terraces at levels nine and 11. This means the floorplates decrease, with uppermost two floors offering 911m² and 607m² respectively.

Creating the terraces has required the installation of two box section transfer structures each weighing 14.6t, at level nine and 11, to support the reconfigured column grid pattern.

“In order to maintain the same floor-to-ceiling heights throughout the building, the deeper transfer beams are installed within the depth of the concrete slab,” explains Mr Modarres.

A further transfer structure has been installed along the second floor’s eastern elevation. The beam forms an overhang, which is necessitated by the proximity of an existing electricity sub-station.

The Stage development is scheduled for completion in November 2021.

Archaeological discoveries on central London construction sites are not uncommon, but finding a long-lost Elizabethan playhouse where Shakespeare’s Romeo & Juliet and Henry V were first performed is a one-off occurrence.

Known as the Curtain Theatre, the playhouse was built in 1577 just outside of the City of London in Shoreditch. It was one of the capital’s premier theatres and William Shakespeare is even said to have trod the boards there himself.

History is a little sketchy on its fate, but it is believed that it closed down in the 1620s and was converted into tenements before being demolished and its exact location forgotten.

Jump forward to 2011 and preliminary works for this project unearthed remnants of a stage, the playhouse’s walls and foundations along with numerous Elizabethan artefacts.

Preserving this slice of theatrical history is going to form an important element of the Stage development. The Curtain Theatre finds are being preserved and will be put on public display within a museum structure (likely to be steel-framed) which will sit next to the Bard building in the project’s central plaza.