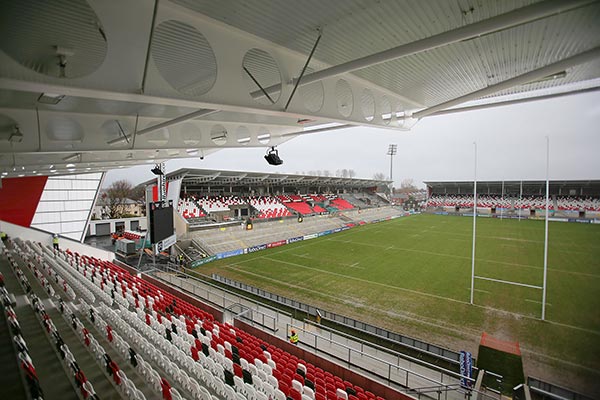 The Ravenhill Rugby Ground in Belfast, which will be officially opened in May, has been redeveloped with the construction of three new stands, raising its capacity from 11,400 to 18,000.

Owned by the Irish Rugby Football Union, the stadium is the home of Ulster Rugby who were able to continually use the ground throughout a phased construction and demolition programme.

Working on behalf of main contractor Gilbert-Ash, Ballykine Structural Engineers erected 800t of steelwork for the Memorial and Aquinas Stands, as well as the new Main Stand.

No machinery was allowed to encroach onto the pitch during the construction, so cranes and MEWP’s had to be positioned to the rear of each of the stands.

“This presented a major problem on the Aquinas Stand, as there was no access to the rear due to an adjacent school,” said Ian Kerr, Ballykine Managing Director.

“We had to off load the 21m long steel rafters outside and bring them into the stadium using a side loader.”