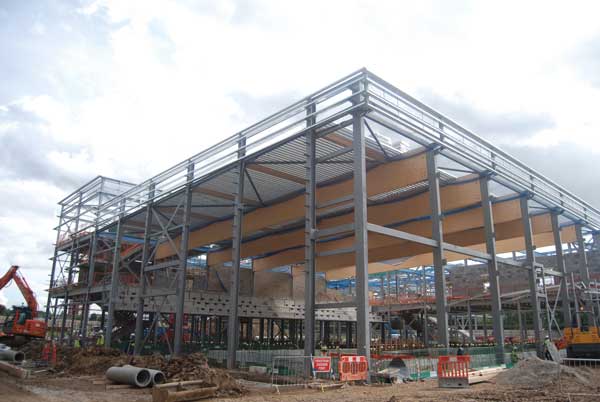 View of the swimming pool area of the leisure centre

Housed within a steel frame, one of London’s largest leisure centres is under construction in Waltham Forest.

Work on the refurbishment of the running track was completed 18 months ago, but the demolition of the existing 1960s pool building could not start until the other leisure centres had been completed, so as not to leave the Borough short of swimming facilities.

“We looked at a number of options for this site and the most economic one was to refurbish the running track, then demolish the old indoor pool and build a new steel-framed leisure centre,” explains AFLS+P Project Architect Darren Bird.

Main contractor ISG demolished the pool structure last November, after which the groundworks programme commenced with the installation of more than 600 x 300mm-diameter piles.

With a footprint of 5,500m², the new leisure centre is said to be one of the largest in London. It is a two-storey steel braced building divided in half by a double-height street. 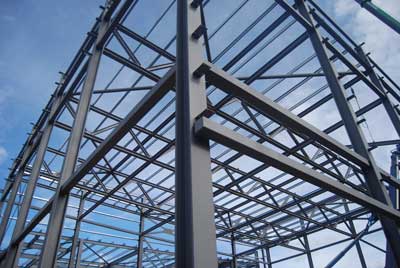 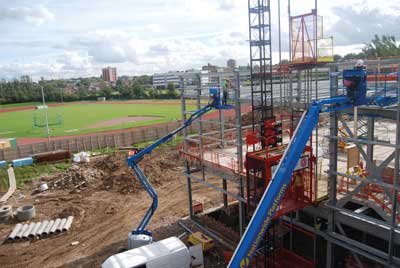 Many of these facilities require large column free spaces, such as the pool hall that has 28m-long spans, the sports and extreme sports halls that have 30m-long and 21m-long spans respectively, and the dance studios where 12m open spans provide the required space.

“Because there are so many areas containing long spans, steel was always going to be the main framing material for this job,” adds Mr Bird.

Steel erection began with the pool and plant areas as these parts of the building are on the construction programme’s critical path.

“The pool hall has a lot more fit-out requirements than the rest of the Centre, so once the two pools had been excavated it was essential to get this area erected first,” says ISG Project Manager Ray Faulks.

Utilising a regular 7m spacing the main columns around the pool support a series of 28m-long glulam beams, which were installed along with the steelwork by Billington. The company also installed precast planks, used to form the first floor, and terracing for the seating gallery.

Once the pool was erected, the street followed by the two-storey section of the building was next to be constructed.

“The street is the hub of the centre, it not only provides access to all of the facilities, but also allows natural daylight into the building via glazed roof voids. Its central position also means that it divides the centre into wet and dry zones, with the pools and their changing rooms on one side and the sports halls on the other,” says Mr Bird.

Transparency and lots of natural light were two of the main drivers in the leisure centre’s design. The front elevation of the building features full-height glazing offering pool users plenty of light and allowing people to see into the aquatics hall. Also along the same elevation, and above the main entrance, the first floor fitness suite also benefits from the full-height glazing.

Other areas where the steelwork has been left exposed include the fitness suite and the sports halls, thereby giving these facilities an industrial and/or modern feel.

The final part of the steel erection programme involved the sports hall and the adjacent extreme sports hall.

The sports hall’s long clear spans are formed by a series of 21m-long cellular beams, while next door in the extreme sport hall 30m-long roof trusses positioned 90 degrees to the cellular beams have been used.

“The trusses are positioned in a different direction because of the fall in the roof and to suit the drainage,” explains Mr Diaz.

“The extreme sports hall was a late addition to the scheme by the client,” says Mr Bird. “Because of the nature of the sports intended for the hall (outdoor activities), it has no heating and so this part of the building is actually outside of the overall thermal envelope and structurally independent.”

Another reason for the extreme sports hall being independent is the fact that the building is more than 100m long and a movement joint had to be located somewhere. To facilitate this joint, there is a double row of columns along the two elevations that separates this steel-braced box from the rest of the structure.

The new Waltham Forest Pool and Track is due to open autumn 2016.