A huge environmental benefit will be had from Europe’s largest bonded warehouse which has recently been erected in Avonmouth.

The UK is said to be the largest importer of wine, with more than one billion litres of the red and white liquid entering the country from Europe and the rest of the world every year.

Wine is predominantly imported in bottles, which according to Waste and Resource Action Programme (WRAP) is an unsustainable method of transportation. A new development, which also has the distinction of being Europe’s largest bonded warehouse, will change this situation by importing wine in large containers before bottling it on site and then distributing throughout the UK.

WRAP says bulk importation can reduce shipping costs by up to 40% and benefit the environment by using less fuel for transporting full bottles.

Steelwork erection has recently been completed on the warehouse, a 82,000m² structure for drinks company Constellation Europe which incorporates bottling plant, storage and offices. Working on behalf of main contractor Fitzpatrick, Atlas Ward Structures fabricated, supplied and erected in excess of 2,860t of steel for the project.

The new building is conveniently located close to Avonmouth’s port facility and will receive large quantities of wine from abroad for packaging and distribution within the UK. Client Constellation Europe is one of the largest drinks companies in Europe and part of the Constellation Brands, the largest wine company in the world.

Atlas Ward erected the portal frame building in just 11 weeks. Overall the structure is divided into two parts and consists of seven spans, a 4 x 39m sector for the large 48,999m² warehouse and 3 x 39m spans for 26,499m² production centre. At the gable end the warehouse also has an attached three storey office block.

Atlas Ward Project Manager Andrew Bramley, says the Main Contractor’s construction programme of 38 weeks for the entire project team was very tight and this contributed to an extremely busy and organised site.

Main contractor Fitzpatrick’s work began last October with a cut, fill and remediation programme on the brownfield site which previously housed a mustard gas factory. A 450mm thick capping layer of stone and geotextile was installed as part of the remediation strategy to cover ground that contains arsenic, cadmium and zinc.

“The steel erection programme was basically dictated by the groundworkers.” says Mr Bramley, “As they readied the ground, we put the steel up.” 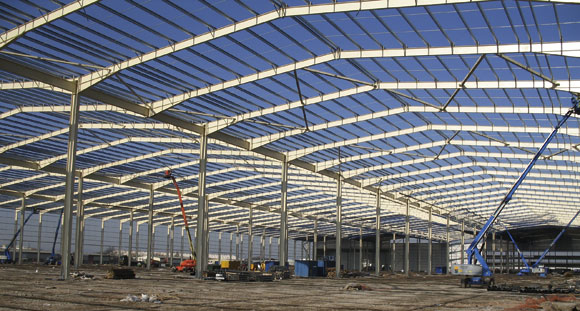 The warehouse is divided into two parts, a seven span distribution and a three span production area