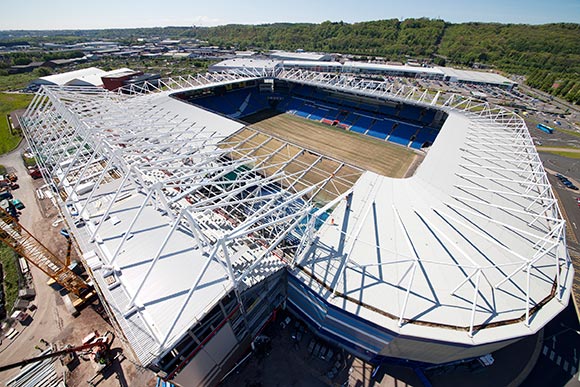 Steelwork played a central role in allowing Cardiff City’s stadium to remain open throughout the construction of a new upper tier to its Ninian Stand.

Completed in time for the August kick-off of the 2014-15 season, the capacity of the stadium has been increased from 28,050 to just under 33,500 with the expansion of the Ninian Stand.

Just over 5,000 new seats are located on a new upper tier along with boxes and corporate hospitality facilities attached to new concourse areas spread over two levels. A new 42.5m-wide cantilevering roof, which shelters both the lower and upper tiers, has also been constructed.

Opened in 2009, the Cardiff City Stadium is the second largest stadium in Wales and the owners have always anticipated a gradual enlargement of the arena.

Most of the project was completed during the previous season in such a way that no disruption was caused to the daily working of the stadium, as it remained fully functional throughout the works.

As Cardiff City FC Director Steve Borley explains: “The original stadium design was built in a way to ensure that any expansion could be made with minimal effect and disruption to the current structure and our supporters.

“Any expansions would always have to be started during the season and this stadium has allowed us to do that without affecting our capacity levels.” 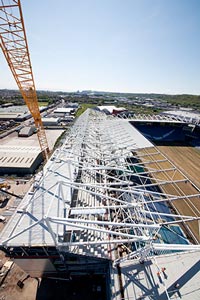 The existing stadium and the new tier are both formed with structural steelwork and this has helped the construction programme, as, a few alterations aside, the new steel structure and roof have been bolted straight onto the original steel frame.

SKM (now Jacobs) was the project structural engineer responsible for the steel design, while Arup – designers of the original steel frame – were project architect and had responsibility for overseeing foundation and floor slab design.

Mabey Structures, a new specialist business created by Mabey Bridge, was the steelwork contractor and began work in September 2013. Its approach included several key considerations such as safety of users of the stadium during construction, and the scheduling of work that had to stop and start either side of home matches.

Work on the new tier was never carried out on a Saturday match day, and prior to a game all site entrances and materials were safely secured. The existing roof was kept in place during the season, with the new structure erected behind and above it. This allowed the stand to remain in operation throughout the construction programme.

Working on behalf of main contractor Buckingham, the steel fabrication was initially undertaken during January and February this year.

The first step in the installation of the new steelwork was the insertion of steel beams into the existing structure at the rear of the lower terrace.

“Some bracings had to be removed and new beams installed for revisions to the lower tier,” says Mr Benwell.

A new 106m-long two-storey beam and column structure was then constructed behind the back of the current stand to accommodate concourses and refreshment outlets. It is two bays deep and based around a grid pattern of 10.5m × 7.1m.

This structure supports the new upper tier that cantilevers 7m over the existing lower tier and is formed with tapered fabricated plate girders.

“These cantilever sections were specifically designed to provide the necessary stiffness to limit dynamic response under crowd loading,” says Paul Hill, SKM (Jacobs) Lead Engineer. “And consideration was given to the connections to allow these elements to be constructed only after the existing roof had been removed.”

The new roof cantilevers in total 42.5m, but only the 10.5m backspan and about 19m of the cantilever could be erected during the football season. This portion of the roof was erected in modules comprising a rafter, the supporting mast, the 14m-long backstay and the connecting inner forestay.

An important part of Mabey Structures’ technical challenge was the design of bespoke connections between the steel members, as well as checking the construction stage stability of the structure and designing the temporary works necessary  for erection of the structure.Immediately after the last home match of the season, the existing roof and its supporting columns were removed which then allowed  the the front portion of the new roof, along with the connecting 34m long front forestay, to be erected.

“The roof is too long to have been erected without spliced rafters and forestays, so it was designed with bolted connections at the optimum position to suit temporary stability and the necessary two-stage erection programme,” adds Mr Hill.

The football season has now well and truly begun and Cardiff City is hoping for bumper crowds to fill their enlarged stadium. On 12 August, the enlarged venue hosted its first major game as the stadium was filled to capacity for the UEFA Super Cup, between last season’s Champions League winners – Real Madrid – and last season’s Europa League champions – Sevilla.