April 8, 2020 by NSC in Projects and Features, This month's featured stories 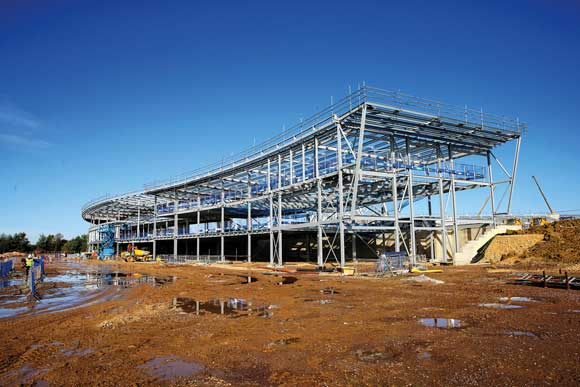 The three-storey training centre building will include an hotel

Located north of the city on a former golf course and fishing centre at Charnwood, the training centre is set around a main signature steel-framed building that houses a full-size indoor artificial pitch, which has been designed to blend into the surrounding landscape.

Structural steelwork is playing a leading role in the project, not just in the construction programme, but also in its design aspect.

The landmark building that houses the full-size pitch is a large domed structure, offering a clear span of 74m × 122m and featuring built-up grass embankments on either side, helping to make it partially subterranean and sit comfortably in the rural setting.

The design of this 24m-high building went through a few changes and, according to KSS Project Architect Lorenzo Pierini, the original concept for the building envisaged a lightweight timber diagrid roof supporting translucent ETFE panels. This was then modified several times, until the most cost-effective solution was arrived at. 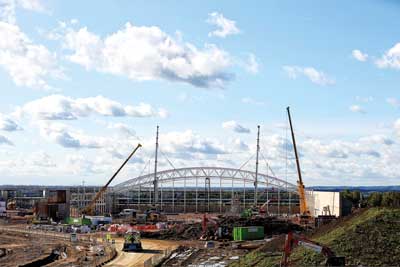 A total of 13 arched trusses form the signature structure 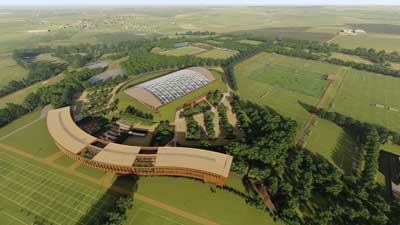 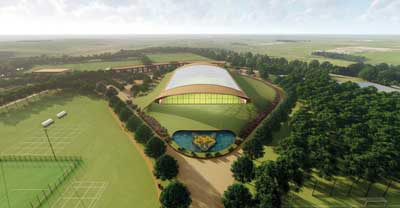 The final design consists of a series of 13 arched steel trusses, set at approximately 9.3m centres, supporting a box section steel diagrid and a series of intermediate arched rafters set at 4.65m centres.

The arched trusses are approximately 3.6m deep at mid span, reducing to 1.9m at the eaves. They are restrained laterally by a steel diagrid on the bottom boom constructed of 300mm × 300mm box sections. The intermediate arched rafters are supported off the diagrid and propped up on circular hollow section struts.

The roof structure is supported on steel columns on either side of the hall which sit approximately 2m inside of stability-giving reinforced concrete retaining walls.

This allowed the steel structure to be erected in advance of the retaining walls and made provision to accommodate construction and erection tolerances between the steel trusses and the concrete walls.

Further stability for the steel roof is provided by the press and media centre, which is a two-storey steel-framed lean-to structure that is positioned on one side of the indoor pitch.

Each truss was fabricated by steelwork contractor BHC in four welded parts, which were transported to site and then bolted together into two halves. The splice connections take the form of concealed bolted connections with cover plates.

BHC’s erection process involved lifting two halves of each truss into place, using two 80t-capacity mobile cranes, and then making the final central bolted connection, once the pieces were connected to their supporting perimeter columns.

Once erected, the trusses were tied to the retaining wall structure and then a backfill operation was undertaken to create the slopes on either side of the building.

Creating some more architectural interest to the structure, the arched roof has an overhang of up to 12.5m-deep at each gable end. The overhang is supported by a series of UC section cantilever rafters propped off the top of the gable posts.

As well as the indoor pitch building, the other main structure on this huge 184-acre site, is an integrated steel-framed three-storey, training centre building for the first team and academy squads. It will include a hydrotherapy pool, gyms, lecture and tactics rooms, changing rooms, offices, and on the uppermost level, 28 bedrooms and two suites designed to a five-star hotel standard.

This structure is also said to respond to the site’s topography, as it incorporates two gentle curves along its 200m length. Constructed on a slope, it has three floors along the southern elevation and two on the northern side.

“This allows the structure to step-down towards the facility’s pitches, while the curvature of the building directs the squads to their individual training areas, as the first team and academy squads are based at separate ends of the centre,” adds Mr Pierini.”

The building is 20m-wide for the most part and the majority of the structure has been designed with a central spine corridor, with rooms on either side. The main exception being the centrally-positioned first floor dining area. A series of cellular beams spans the corridor, housing the main service ducts, which subsequently filter into each individual room.

“Steel was the ideal solution for the indoor building because of the required spans, but the decision to use the material for the training centre building was because it ties in easily with the large adjacent concrete elements for a podium and swimming pool, which were being formed while the steelwork was being installed,” explains TRP Consulting Engineer Zahid Patel.

Alongside the construction of buildings, the project has also required a huge earthmoving programme to be completed, in order to plateau and level the ground in preparation for the pitches.

However, one of the initial tasks was to relocate a large number of reptiles, including great crested newts, to a new home within the site. Over 400 fish were netted and rehomed to new ponds, while 27 acres of retained woodland will eventually be bolstered by the planting of 38,000 new trees.

Once the preparatory works had been completed, McLaren and BHC, started the steel erection process with the project’s smaller buildings, while the design of the two main structures was being finalised.

This steel erection work consisted of a two-storey sports turf academy, where future grounds-people will be trained, followed by a 499-seat grandstand for a junior pitch. Designed with steel columns and beams supporting precast terrace units, the stand will allow under-23 and under-18 teams to play in front of a crowd and experience a proper match environment.

A steel-framed parent’s pavilion was also erected. This single-storey building, adjacent to the junior football pitches, will offer kid’s parents a refuge from inclement weather and somewhere to sit down with a tea or coffee.

With so many football pitches, as well as a golf course (a remnant of the original club) to take care of, a large fleet of specialist turf equipment is needed. A steel-framed machine store was also erected to house these vehicles, alongside a boiler house that will power the Centre’s under soil heating. 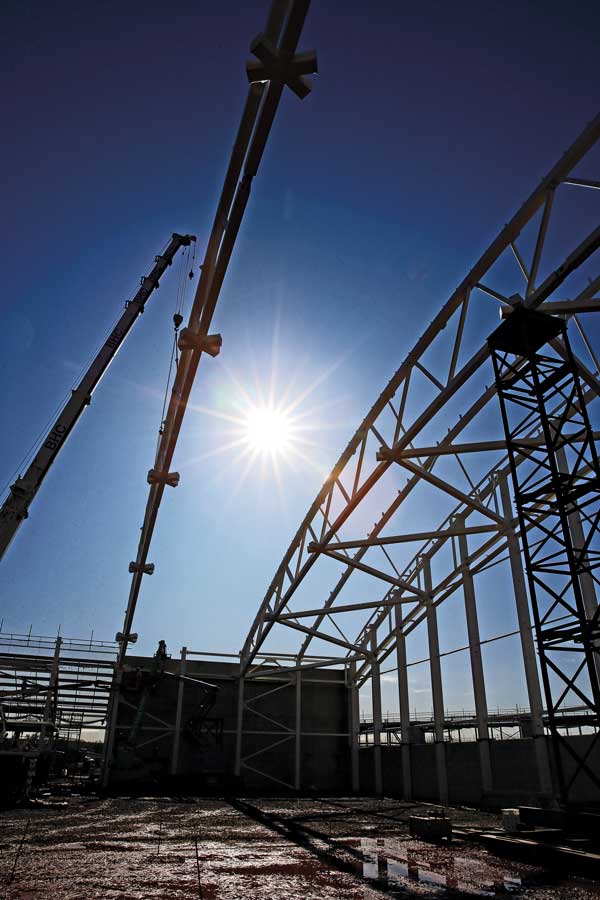