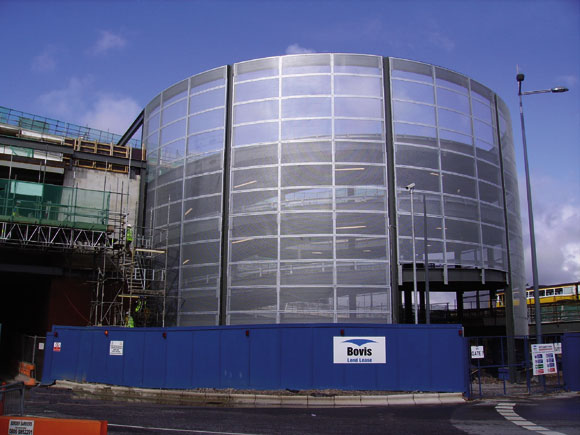 A new ramp provides access to the rooftop parking

An innovative solution to extending a shopping centre in Warrington could be the model for similar city centre developments in the future, as Margo Cole reports.

The growth in out of town retail parks has made life increasingly difficult for city centre shopping developments. Warrington is hoping to buck this trend with an ambitious plan to redevelop the town’s 27-year old shopping centre and turn it into one of the country’s top 40 shopping destinations.

Developer Lend Lease has taken on the existing Golden Square shopping centre and is investing £120M in refurbishing it and building an extension that will more than double its size. Big name retailers have signed up to the scheme, which is due for completion next Easter.

Lend Lease awarded the construction contract to Bovis, whose project manager Simon Pritchard says: “Our brief was to extend the existing shopping centre in a period of 107 weeks, but the big challenge is the phasing of the scheme. There are some key constraints, including relocating a live bus station, £4M of utility diversions and the need to maintain car parking to the existing shopping centre – which has remained open throughout the construction.

“The overall duration is sensible for a scheme of this nature if you can tackle it in one hit, but it’s a real challenge if you’ve got the phasing issues that we have.”

At the start of the project Bovis built a temporary bus station so that the existing facility – which sat on the site of the Golden Square extension – could be demolished to make way for the new buildings. Under a separate contract Kier then built a new bus station, which opened in August. 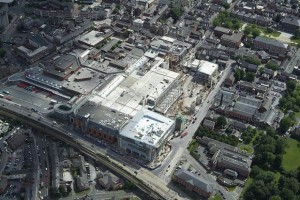 The extended shopping centre will transform the centre of Warrington 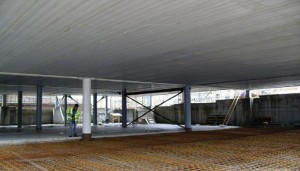 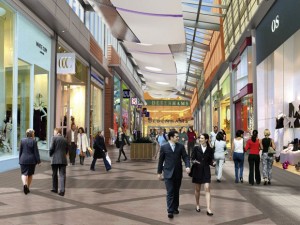 Bigger and better: the extension will be completed next year

Getting transport to the shopping centre is really important to Lend Lease because, if the transport links are not good enough, or the parking inadequate, shoppers will simply go somewhere else. As a result, the completed scheme will incorporate 1,700 car parking spaces on four different levels: one in the basement beneath the shops, and three levels above the retail space.

This parking provision – particularly the upper levels – influenced the structural design of the extension, with the design team originally opting for a steel beam system that would have to be sourced from Finland, in combination with in situ concrete columns and precast concrete floor slabs. According to Simon Pritchard, this was highlighted as a key risk on the project if – as proved to be the case – the complexities of the phasing and site constraints meant that work would have to be re-sequenced. “The beams would have been fabricated in Helsinki, so it would have been very difficult to react to any issues we might have on site,” he says.

Instead, at the tender stage, Bovis and its structural steel partner William Hare offered an alternative, all-steel frame solution combined with precast concrete planks. “It isn’t the same system, but it does satisfy the client’s design intent, with a flat soffit throughout and long spans in the car parks,” explains Pritchard. “That’s a real win for the project and it’s a unique solution.”

The 34,000m² Golden Square extension consists of a new mall that wraps around the existing 29,000m² shopping centre, with retail space on one main level and a mezzanine above some of the shops. Above this are the three levels of parking.

Bovis and William Hare’s solution, which is being used for the main retail floor and the upper levels of car parking, is to use a combination of pre-cast planks and asymmetric steel beams. An in-situ composite concrete topping provides horizontal stability.

“This solution gives us all the qualities of steel from a construction point of view,” explains Pritchard. “The original design had concrete columns instead of steel columns so we would have had different elements that lend themselves to different contractors. Our solution ticks all the boxes from a design point of view, and we have made a solution that lends itself to a steelwork contractor.  The precast planks have not been a problem for them.

The Bovis/William Hare solution also makes the foundation design more efficient than the original solution, because the steel columns are much lighter than concrete, so there is reduced loading on the piles.

Neat though the solution is, it still presents a technical challenge to William Hare. “The planks are 400mm deep and 15.6m long, so the logistics of putting them in and phasing the works so that they can sit in the bays was a real challenge,” says Pritchard.

In all, William Hare’s contract involves erecting 5,500t of structural steel and 68,000m² of the concrete planks. “The design interface between the steel frame solution and the 400mm concrete planks – which are over 15m long – was a challenge we overcame as a team,” says a William Hare spokesman. “It has had to be designed and constructed in a very tight programme and within the constraints of the phasing.”

As anticipated, the construction programme has had to be reprogrammed to accommodate problems with the utility diversions, which took longer than planned, and the relocation of an electrical substation, which stayed on site six months longer than expected. Bovis had split the extension building into different zones, and had to re-sequence the order in which the zones were built to take account of this.

Simon Pritchard says the all-steel frame solution was far more flexible when it came to responding to these changes than the original design would have been: “I do not believe we could have turned it around in the timescale required by the client after those utility delays. In situ concrete is very labour intensive, and mixing precast, in situ and steelwork is quite inefficient.”

William Hare and Bovis believe their solution could work on similar retail developments where space is tight, and intend offering it to other clients elsewhere in the UK.