April 13, 2018 by NSC in Projects and Features, This month's featured stories 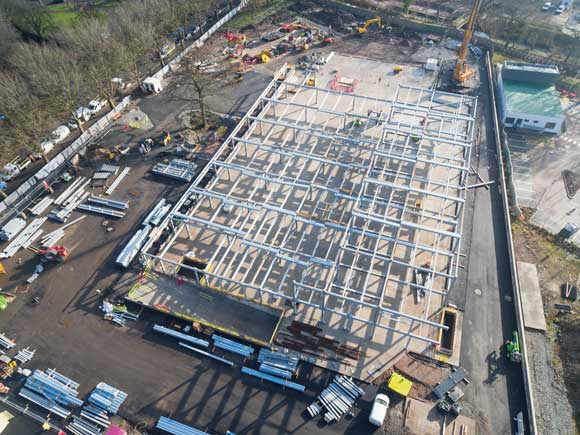 The main block sits atop a car park podium

The flexibility of steelwork has come to the fore on a hospital project where an expandable and adaptable design has been successfully used.

The £21.5M facility, located in the heart of what has been dubbed Edgbaston’s Medical Quarter, is the latest addition to Circle Health’s portfolio which includes hospitals in Bath, Nottingham and Reading.

Utilising a steel-framed design sat atop a concrete podium containing a car park, the hospital is based around an expandable model which can be adapted and enlarged to meet clinical demand now and in the future.

Being constructed over two phases, the hospital will include three operating theatres (expandable to five), an endoscopy procedure room, recovery gym, and in-patient bedrooms.

Circle’s Health’s Chief Executive, Paolo Pieri, says: “This state-of-the-art hospital will bring to Birmingham the high-quality care and excellent hospitality for which Circle Health is well-known, and is an important part of Circle’s strategy to add scale to the group. The intention is also to add a significant number of beds for physical and neurological rehabilitation, along with the latest rehabilitation technology.”

The key aspect of the architect’s design approach has been to create a form of ‘adaptive architecture’, giving the client the ability to adapt the building as their needs change. 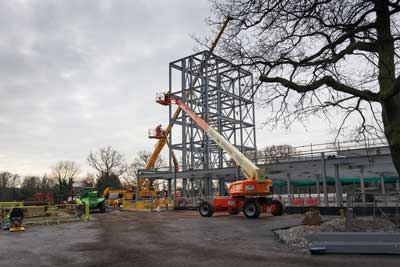 The initial steel elements are erected 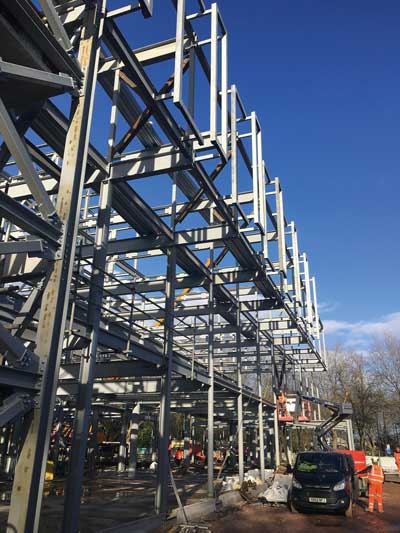 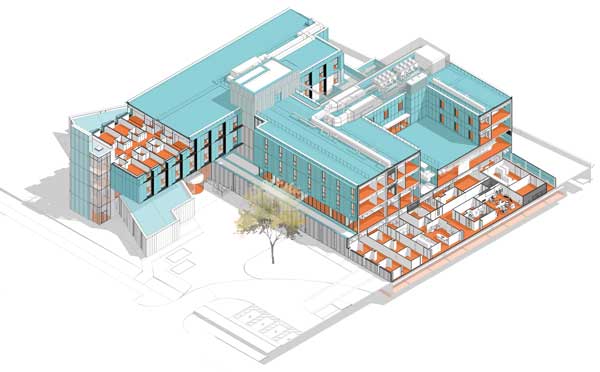 Model showing blocks B and C

Bryden Wood Director Paul O’Neill explains: “In this instance, we have the ability to double the size of the initial phase, harnessing advanced construction techniques causing minimal disruption. This future-proofing makes this hospital highly adaptable and cost-effective. This provides our client with a building, which can be adaptable to their business plan as it evolves and responds to local demand throughout its lifetime.

“Our approach has meant that the future incorporation of rehabilitation services into the scheme is made possible. It shows that it is essential to rethink healthcare design, and there is a clear need to provide spaces to be continuously adaptable to the future needs of healthcare requirements and technology. Circle Health successfully responds to these challenges,” he said.

“A second phase was always on the cards during the initial design, but it only became a reality once the construction programme got under way,” explains Simons Group Project Manager Stuart Partlow. “It’s not necessarily ideal to have Phase Two steelwork being erected above areas that are already erected and occupied by other trades, but we will have a suitable logistical working plan in place.”

As far as the project’s Phase One steelwork is concerned it has been designed to accept further phases. As well as having slightly larger members than would ordinarily be needed, Caunton has pre-welded a series of stubs to the top of the uppermost columns and beams. This will allow the easy installation of Phase Two steelwork members.

The hospital consists of three blocks, with the main building known as block C measuring 75m-long × 32m-wide. Sat entirely above the concrete podium, this structure’s steel grid pattern has been dictated by concrete columns forming the car park below.

Its ground floor will accommodate the operating theatres, recovery rooms and X-ray department. Also included in the initial steelwork phase, a first-floor plant area has been erected that covers just under half of block C’s footprint.

To accommodate Phase Two, a number of transfer beams have been included along the ground floor ceiling to support the column grid change for a first-floor rehabilitation gym that will cover the area adjacent to the plant area. Because of the need to have a large column grid for the exercise equipment, the grid changes from a 7m × 15m pattern to a 15m × 15m formation.

Phase Two will also include a block C second floor, where the grid pattern will change yet again to accommodate 60 patient bedrooms.

Attached to one end of block C, block B is 40m-long × 20m-wide and will accommodate the hospital’s main public areas, such as the main entrance and a ground floor café/restaurant, with the first floor used entirely for administrative offices. Also included in the first phase is block B’s second floor, which will contain 24 patient bedrooms.

“There were a number of reasons for choosing a steel frame for the project,” says Mr O’Neill. “The speed and ease of construction were two, as well as flexibility and the ability to secrete bracing around the structure. We also have a 7.2m long cantilever along one of block B’s main elevations and this would have been difficult to build in anything other than steel.”

As well as being a highly architectural part of block B’s design, the cantilever also increases the floorplate for the second-floor bedrooms. It will also carry on up to include a further floor to be added in Phase Two, while another – fourth level – could even be added in the future.

“We had to work collaboratively with the engineer and the contractor to design and then work out the best position for the temporary works, needed to support the cantilever during both phases of the construction programme,” explains Caunton Engineering Contracts Manager Michael Firth.

Adjoining block B is block A, which measures 30m-long × 15m-wide. Used entirely for consulting rooms, this block will remain as a single-storey structure, although it has been designed to be extended to the rear to add up to 10 additional consultation rooms, again exemplifying steel construction’s flexibility.

Phase One of the project is due to complete by early 2019.

Expanding businesses often require extensions to premises or process plant. The amount of disruption caused by such extensions depends on the degree of forethought that has been applied to them. If development is ad-hoc and haphazard, the structural work required to realize the extensions may be inefficient and messy whatever are the materials of construction.

If the extensions can be foreseen, the structure can be designed for the anticipated final state and the elements sized for the final loads. Thus, to allow for an upward extension, foundations and columns can be designed to carry the floors which are to be added in the future. Provision must also be made in the size of utility supply, space for future plant, sizing of ducts and circulation (eg the capacity of escape stairs must be sufficient for the future). Such provisions can be effective if the future needs of the business can be anticipated with confidence. The issues are clearly less significant if site constraints are such that expansion can be made sideways instead of upward.

Potentially the most impacted area of a building subject to future extension is the building envelope which clearly must provide an efficient enclosure at the end of the first phase and be capable of being made weathertight when the building is extended.

The Circle health project was conceived in two phases, presumably with the second phase to be built after the first was completed. It seems that the building was designed as a whole and the Phase One structure sent for fabrication with some provision made to reduce the disruption of the future connections of the Phase Two steelwork – namely stubs welded to beams and columns on the highest level of Phase One.

The second phase was given the go-ahead before completion of the first so that erection of the Phase Two steelwork is taking place concurrently with work by following trades on Phase One. The short interval between the erection of Phases One and Two probably rendered the stubs superfluous but such is the impact of reacting to rapid changes in business requirements.