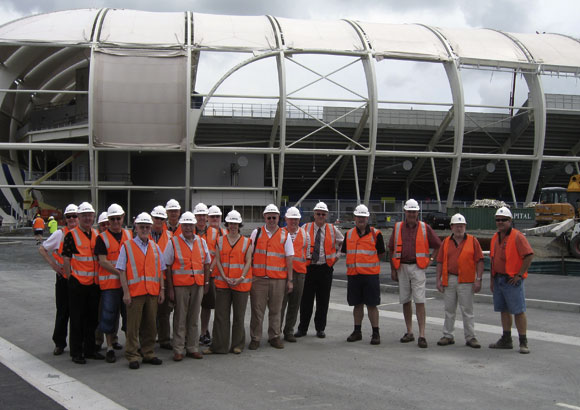 Roger Pope reports on a successful BCSA mission to Australia in November which found that major companies like Multiplex are turning their backs on concrete in favour of constructional steelwork.

The objectives of the 19 strong mission were to attend the meeting of the International Steelwork Contractors Group, to join the Australian Steel Convention in Sydney and to visit local steelwork contractors and steel construction sites.

The ISCG is a forum established for the exchange of views between steelwork contractors and trade associations based in several countries. In addition to the UK and our Australian hosts, the following other countries are represented: Canada, New Zealand, South Africa and the United States.

The ISCG was briefed on the economic prospects and the market outlook for steel and steel construction by Australian specialists from local steel producers BlueScope Steel and OneSteel. The projections were very positive with the demand for steel worldwide being buoyant in the next few years. This in turn is leading to a significant rise in demand for steel construction associated with mining and steel processing. The global figures are staggering with China alone using 62% of its 444 million annual tonnes of steel in construction related work. Yet, even at that level, their steel usage per capita is only 265 kg pa compared with a 450 kg figure typical of developed countries.

There were significantly different views on the outlook for steel construction seen from the perspectives of the six countries represented. Both Australia and South Africa are experiencing booms due to the demand for their raw material resources. This is also leading to demand for power plants, commercial and residential premises to serve the booming economies. It is also sucking in qualified personnel from New Zealand and causing some problems there.

Canada is seeing very significant differences across the country with the West being most positive-ly affected by global trade and demand for resources. Alberta is benefiting particularily from the develop-ment of tar sands. However, in the East manufactur-ings’ dependence on the US, where credit uncertain-ties and an ‘overhang of too much built real estate property’, are affecting the business confidence to invest. Aside from the demand side issues, the US is experiencing supply side changes with ‘integrated project delivery’ becoming mandatory for larger projects. This is blurring the distinctions between the design teams and the contractors.

Nevertheless, overall the outlook was as positive all round as it has been for many years. One issue of concern is the penetration of imported steel products of doubtful quality – fasteners and hollow sections were identified. The introduction of CE marking in the European Union will provide better assurance of quality through the supply chain as manufacturers will need to have their factory production systems audited regularly and only by approved certification bodies. This may mean that the CE mark becomes a mark of quality that other countries might value. Otherwise, if the EU initiative is successful, products of dubious quality will be re-routed to countries without such controls.

Increasingly the standards that apply to steel construction are agreed internationally. For instance, EN ISO 3834 is effectively the world standard for welding quality management; and the BCSA’s initiative to introduce its requirements through the NSSS is being repeated in other countries.

One ambition of the ISCG is to develop synergies from such discussions and the Sydney meeting agreed that sustainability was the priority for joint action. Richard Barrett, BCSA’s President, was asked to chair an ISCG Sustainability Task Group with the objective to use the international framework provided by the ISCG to develop steel as a sustainable form of construction in terms of economic viability, social progress and environmental responsibility. This objective is modelled on that adopted by the BCSA in its sustainability charter.

The Task Group decided that its priority should be to understand the issues behind carbon footprinting and to promote ideas for best practice. In particular the adoption of the whole life approach was agreed as crucial as it properly values the benefits from steel being the most recycled frame construction material.

The convention was aimed at the whole steel supply chain from steelmaker to erector. Some years ago Australia’s biggest company BHP divested itself of its steelmaking to concentrate on the resources sector. BlueScope Steel and OneSteel were floated. Kirby Adams the Managing Director and CEO of BlueScope Steel predicted further consolidation of ownership in the steelmaking sector, good growth powered by Chinese demand and notably that the sustainability agenda is crucial. 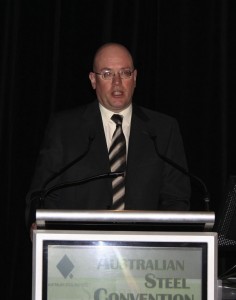 This conclusion from Adams’ keynote presentation was picked up by Nigel Howard of BRANZ and Andrew Marjoribanks the Chair of the Australian Steel Institute’s Sustainability Group. Howard emphasised the importance of proper weighting of the credentials of competing materials, citing the international acceptance that only Life Cycle Assessment (LCA) should be used to assess materials and products. Listing 19 “green schemes” in use worldwide, including BREEAM, ENVEST and LEED, Howard agreed that LCA is complex and stated that, of the main tools, only BREEAM has credits based on LCA. In other schemes the recycling credit can be dysfunctional, leading to no additional recycling of steel. In short, steel scrap is too valuable to not be comprehensively recycled from wherever it arises.

The convention delegates heard from Alison Mirams, Regional Construction Director with Multiplex Constructions on her “Success with steel buildings”. Simply, Mirams advocated the use of steel frames rather than concrete. Using recent and current examples like Latitude East in Sydney, Mirams showed how steel was cheaper and quicker and explained that Multiplex was committed to steel-framed buildings in Australia.

Additional key benefits she cited for steel were reduced weight and off site prefabrication. Automated manufacture resulted in greater accuracy and far less site waste. Steel required fewer people on site making steel safer than concrete – the stripping of formwork being the most hazardous site activity.

Mirams stated that the choice of steel enforced a stricter discipline at the pre-construction stage as off-site manufacture required strict administration of the necessary drawings and meant that late variations would carry a penalty for any rework on site.

The time savings led to reduced preliminary costs, earlier lift room handover, earlier access for services, hoists and cranes being removed earlier and as the building is commissioned earlier this results in reduced financing costs.

Her only major concern was that fire engineering is a developing science and can create uncertainty as to what level of fire rating building control authorities would accept. Finally, Mirams advocated single-point responsibility in which a steelwork contractor undertakes design, supply, fabrication and erection of the complete frame package – a model that is already the norm in the UK but not generally so in Australia yet.