Steel is just the ticket for over-station development 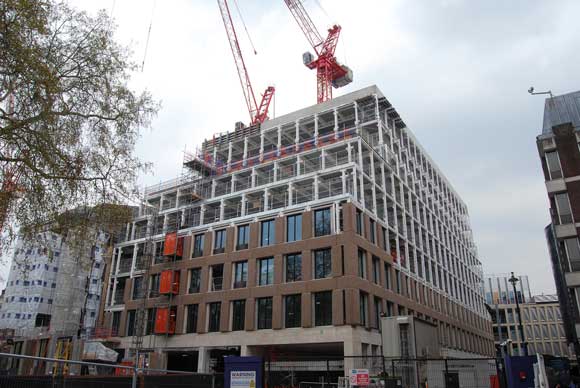 FACT FILE
18 Hanover Square, London
Main client: GHS Limited Partnership (a joint venture between Great Portland Estates and Hong Kong Monetary Authority)
Architect: Lifschutz Davidson Sandilands
Main contractor: Mace
Structural engineer: WSP
Steelwork contractor: Severfield
Steel tonnage: 2,450tThe construction of the (Crossrail) Elizabeth line is providing London with a number of prime opportunities for over-station developments that will sit above the soon-to-open stations and ticket halls.
Possibly the most prestigious of these is currently being built above the Bond Street station eastern ticket hall, where a large 1.3-acre development has been commissioned by Great Portland Estates and will provide 20,400m² of premium office spaces, retail, a restaurant and residential accommodation all centred around a new public courtyard.

The project consists of four separate buildings including 18 Hanover Square. This is an eight-storey structure that sits directly above the new Elizabeth line Bond Street station eastern ticket hall and uses the Crossrail facility’s concrete roof as its first-floor slab.

From the ticket hall slab/roof, the steel frame for the building rises up, while also spanning a new ground floor retail colonnade.

The development’s other buildings consist of an adjacent six-story steel-framed building at 1 Medici Courtyard that features a retained façade along its main New Bond Street elevation. This building will also accommodate six lower ground and first floor flagship retail units, with more than 3,100m² of offices on the upper levels.

At the junction of New Bond Street and Brook Street, a concrete-framed structure will house further retail space with six residential apartments above, while abutting 18 Hanover Square, number 20 is a listed Grade II Georgian house, which is being restored to accommodate offices and a restaurant. 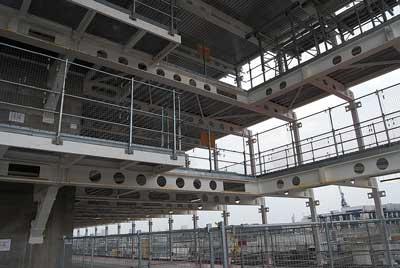 “The success of this project has relied on us continually liaising with the Crossrail team, who are working directly below our site,” explains Mace Project Manager Stephen Wells.

“This has been crucial right through our programme, from the demolition of the site’s previous buildings to the erection of the new structures.”

Discussing the use of steelwork, Mr Wells adds that the material was chosen for the project’s two biggest buildings (18 Hanover Square and 1 Medici Courtyard) because of its speed of construction and efficiency.

“Steel has also helped us logistically, as this is a very tight site surrounded by occupied buildings and with limited room for storage. Steelwork is fabricated offsite and delivered just-in-time, which means less traffic on the already busy central London roads.”

There is also another significant advantage associated with using a steel-framed solution as WSP Director Steve Miller explains: “A steel frame solution is relatively lightweight compared to a solid concrete solution.

“We had restrictions on loading of the Crossrail structure, while the ability to incorporate large clear spans and minimal internal columns was also an advantage in providing Grade A office space.”

1 Medici Courtyard was similar in concept, with large clear spans and minimal slab construction with downstand beams for services to pass through. This frame is founded on a raft which is located directly over the Crossrail running tunnels and escalator shaft. Keeping the new frame light to match the previously demolished building loads is said to have helped keep the ground movements within acceptable limits.

Steelwork contractor Severfield began its erection programme with the 18 Hanover Square building during October 2018. This structure is based around a 12m x 10.5m column grid pattern, but with the perimeter structure columns set at approximately 3m centres to align with the cladding design; all of the columns are founded on the ticket hall’s concrete roof.

The layout changes slightly for the three uppermost levels, as the columns along the main Hanover Square elevation are set back to form a sixth-floor terrace and atrium space.

The desire to minimise floor-to-floor height in both steel-framed buildings led to the use of shallow beams, which were designed as plate girders in many cases, due to the long spans involved. 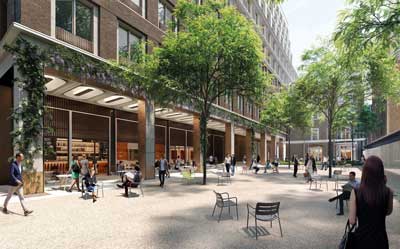 The project will create a new public courtyard

“Modern fabrication techniques make these more economic than they might have been previously. Careful attention to detailing was required to achieve the complex ceiling services distribution system which was usually in the same plane as the beams; a mixture of circular and rectangular holes was used to route the services, with the latter requiring the addition of stiffeners,” explains Mr Miller.

The use of steel also allows better flexibility for tenants to provide openings through the slab and other alterations with reduced effect on the main framing compared to a concrete solution. An example of this is the sixth floor of 18 Hanover Square which incorporates an atrium that extends up to roof level and creates extra circulation space between the three upper levels.

“The inclusion of the atrium at the upper levels of 18 Hanover Square was a design change requested by the client to suit the tenant’s requirements,” explains Mr Wells. “An advantage of using steelwork was the fact that Severfield were able to re-design this part of the frame during their fabrication programme without any delays to the overall scheme.”

The development will be completed with a phased handover of the individual elements, beginning with the residential apartments on Brook Street late this year. The entire scheme will be finished by late 2020.