July 9, 2019 by NSC in Projects and Features, This month's featured stories 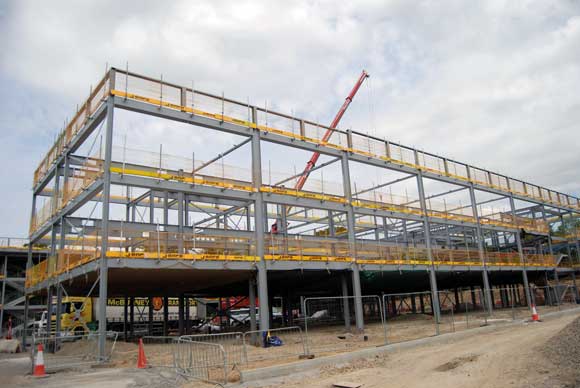 Steelwork supporting precast planks was chosen as the most economic solution

Steel construction’s speed and ease of delivery has proven to be of upmost importance to the project team building a new academy in Kent.

Due to open its doors to students in the Autumn of 2020, the School of Science & Technology Maidstone is being developed by the Valley Invicta Academies Trust (VIAT) with the support of its strategic partner, SST Singapore.

According to the Trust, students will benefit from an education specialising in science and technology in purpose-built, state-of-the-art buildings, which will allow graduates to leave with a highly desirable combination of outstanding exam results and a unique skill set.

The new school is being built on a greenfield site on the VIAT campus in Maidstone, which already includes two secondary schools.

Starting on-site in November 2018, main contractor BAM’s initial task was to install access roads, to not only serve its own site, but also an adjacent plot where a steel-framed sports hall is being built by another construction team.

The U-shaped school will enclose a courtyard 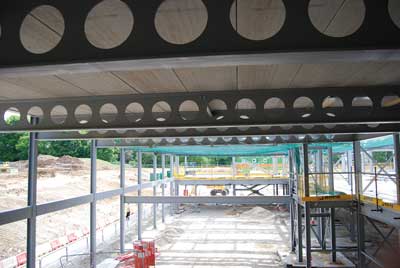 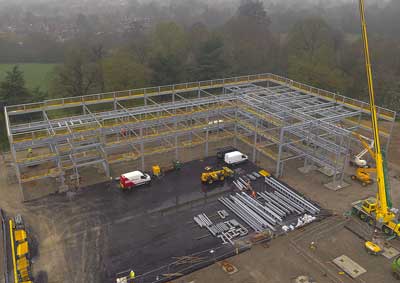 The steel erection programme was completed in 10 weeks

Once the roads were ready, BAM then had to undertake a large-scale earthmoving operation to level the previously sloping plot.

Extensive groundworks were also required before erection of the steel frame could begin.

“A geophysical mapping procedure was undertaken, as the ground is a mixture of soft clay and hard ragstone areas. We had to identify where the soft areas were exactly, so we could consolidate these parts of the ground,” says BAM Project Manager James Gray.

Once the ground consolidation had been completed, pad foundations were installed to support the steel frame.

A steel-framed solution was chosen for the school building as it offered the quickest construction programme, allowing the many follow-on trades the opportunity to get started as soon as possible.

Elland Steel completed the steel erection in 10 weeks, and then installed 8,000m² of precast flooring planks, along with precast staircases during a further five-week programme.

Mr Gray says a precast solution for the two upper floors and roof was the preferred method as it offered an economic way to bridge the internal spans, which are predominantly up to 8m-long in most areas. Another advantage for the site team was the fact that precast plank installation requires no propping, which means it is a quick procedure and there are fewer materials and equipment on site.

The underside of the precast planks, the supporting cellular beams as well as the services, will all be left exposed within the completed school, giving the building the desired modern, industrial-looking interior.

Project architect KSS says, the internal environment will be simple, but inspiring with accent colours to aid way-finding and providing a professional backdrop to the teaching and learning, while maintaining an excellent level of passive supervision.

The school is housed in one large horseshoe-shaped two-storey structure, that required Elland Steel Structures to fabricate, supply and erect 570t of steelwork.

Overall the steel frame is one braced structure, with the majority of the bracing located in stair and lift cores. There are also some braced bays, mostly at the end of the wings, while some areas have been portalised to avoid having bracing elements interfering with the structure’s many windows.

Classrooms are predominantly arranged in two rows in each of the two wings, with a central corridor providing access.
“The classrooms vary in size and do not stack-up in a regular fashion,” says Kirksaunders Associates Engineer Tim Dungate. “This doesn’t mean the grid pattern has to change, but the steel frame has been designed to support partitions that don’t necessarily correspond with the column lines.”

Some important flexibility has also been added to the school design, as partitions can be moved, if the classrooms need to be reconfigured in the future.

The area that connects the two wings together accommodates the main entrance and a large double-height space that serves as the main hall and dining area. A moveable partition wall allows this large space to be used as either one or two halls.

The hall features spans of 12m-long and the design of the moveable partition had to take into account considerable deflections because of its length.

As most of the columns in the hall and entrance areas will be left exposed in the completed scheme, slender steel members have been used as they were considered to be more aesthetically pleasing.

At first floor level, there is a viewing gallery overlooking the hall, while above, on the uppermost second-storey, there are more classrooms positioned above the hall.

VIAT Co-CEO Vic Ashdown comments: “This is a very exciting project for the Trust and we are looking forward to welcoming students to our brand-new school next year.

“We will be extremely fortunate to have some of the best facilities in the county which will benefit thousands of students from across our schools.”