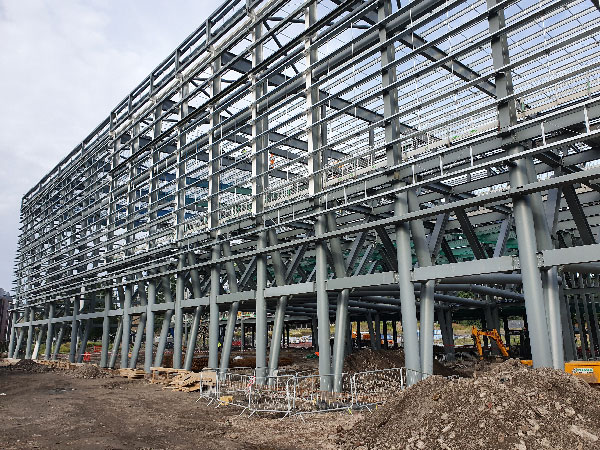 The steel frame, consisting of 2,100t of structural steelwork, for the new Meadowbank Sports Centre in Edinburgh has been completed.

When it opens, the Sports Centre will feature indoor facilities including an athletics hall, dedicated gymnastic and martial arts halls, squash courts, multi-use sports halls, gym and fitness studios. Outside there will be an athletics track with a dedicated, purpose-built space for throws and two all-weather 3G pitches.

The new state-of-the-art centre will replace the now-demolished sports facilities built more than 50 years ago, which were used for the 1970 Commonwealth Games.

Working on behalf of Graham Construction, Walter Watson has fabricated, supplied and erected the project’s steelwork.

Some of the largest steel elements include a series of 24m-long tubular trusses and 24m-long beams that support the first-floor sports hall. Creating the column-free space on this floor, the roof of the centre is supported by a 40m-long Toblerone-shaped truss.

Forming the facility’s main entrance is a series of 19m-high tubular columns, chosen for their aesthetic appeal, as the steelwork will be left exposed in the completed sports centre.