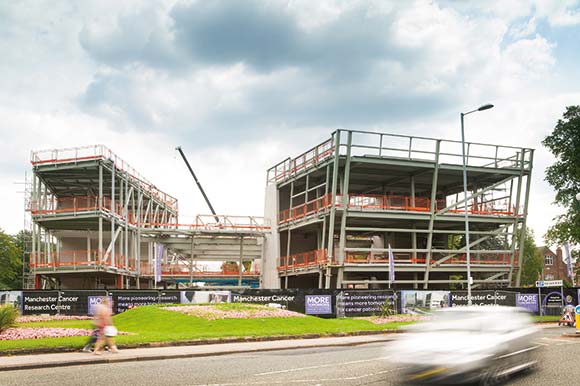 A cancer research centre in Manchester is being constructed with a steel frame to create a building that can flexibly accommodate both research laboratories and office space.

The new building will aid the expansion of research by providing space for an additional 150 cancer researchers whose research will focus on understanding how cancer starts, develops and progresses, as well as 100 clinical trials support staff. It has been designed to facilitate collaboration between researchers and clinicians to translate discoveries made in the laboratory into new personalised treatments for cancer patients.

The facility is expected to attract leading experts from across the globe and so the client’s brief to the design team stipulated an iconic flagship development.

Situated overlooking a busy thoroughfare, the structure is destined to become a local landmark with its visually exciting cantilevers and sloping facades. This complex structural design had to incorporate both research laboratories and offices and this led to the decision to employ a hybrid approach to the structural frame.

“Using a steel frame allowed us to create the desired structural shape and the hybrid design helped solve any vibration issues connected with the sensitive equipment which will be installed within the completed facility’s laboratories,” explains James Potter, Wilson Mason Project Architect.

The building is divided in half by the entrance and a large lightwell. Three interlinked laboratory wings are positioned on one side of this open space with the offices on the other side. Both consist of three levels (including ground floor), with the laboratory area’s topmost level occupied by a plant floor.

The three levels of office accommodation have been constructed using a composite solution with steelwork supporting steel floor decking.

In the laboratory areas a steel frame supporting precast planks is utilised to accommodate the varying degrees of vibration due to the research equipment.

The planks vary in depth, up to a maximum 350mm thickness, depending on the equipment to be installed and the soffits will be left exposed to optimise thermal mass, thereby helping to cool the building, explains Jon Sheppard, Aecom Project Engineer. “Although this was of secondary importance to the vibration issue.”

Aside from the two disparate functions accommodated within the structure, the overall form of the building has presented some interesting design challenges.

“The complexity of the shape lends itself to steelwork with reinforced cores,” says Dave Mills, Pochin Project Manager. “We have split levels, cantilevers and sloping facades, all of which would have been difficult to achieve with any other material.”

Each of the laboratory wings feature a 12 degree sloping façade, making them look like protruding blades. They are each supported by sloping shear walls and cores, and formed with raking columns.

Overall the stability for the building’s frame is derived from the cores with additional stability provided by bracing. Temporary steelwork was also extensively used throughout the sloping areas, as these parts of the frame were not fully stable until they were topped out and the floors installed.

According to Mr Potter, the sloping facades not only furnish the structure with some standout architectural elements, they also help maximise the available footprint.

“By leaning away from the lightwell the first floor has a larger footprint and so provides more valuable laboratory space,” he adds.

The majority of the raking columns will be left exposed, adding further to the modern and aesthetic feel of the laboratory zones and the adjacent lightwell. 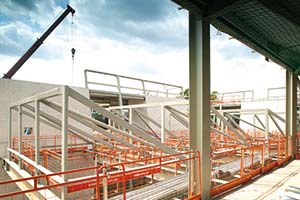 Spanning the lightwell, a steel footbridge will connect the offices with the laboratories at first floor level. Above this, the building’s central void is topped with a series of north lights, formed with steel frames.

These frames were brought to site as welded triangles and once they were bolted into place, secondary bracing was then added.

The north lights will illuminate the centre of the building, as well as some of the laboratories with natural daylight. The entrance area’s public café will also benefit from this feature.

Professor Nic Jones, Director of the Manchester Cancer Research Centre, says: “The new Manchester Cancer Research Centre building has been designed to provide state-of-the-art research facilities that will enable our scientists to make ground-breaking discoveries that lead to improved treatments for cancer patients. The new centre marks an important new phase in cancer research in Manchester and will be completed and ready for use in Summer 2014.” 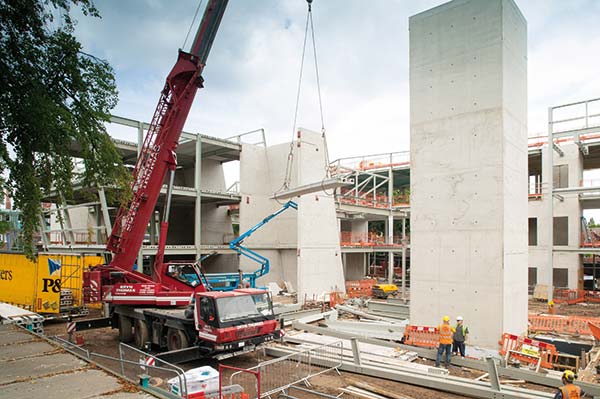 The MCRC site is compact with limited space for materials to be stored or cranes to be located. Steelwork contractor EvadX has employed a just-in-time method for its steel deliveries with everything lifted into place the day it arrives to site.
Another challenge is the fact that the structure has eight cores, which provide lateral stability to the frame.
“Avoiding the cores while lifting steelwork, planks and steel floor decking was a considerable challenge and required a lot of logistical planning,” says Andrew Roberts, EvadX Project Manager.
Because of the job’s complexity the 575t steel total includes hundreds of small sections. At the other end of the scale, the longest pieces of steel to be erected are a series of 18m long x 700mm deep fabricated beams which form the entrance and lightwell.
Another large steel element is a 16m long × 5m high truss which forms the office area’s feature 11.5m cantilever on the front elevation. The truss is situated on the second floor and as well as creating the cantilever the first floor of this part of the building is hung from it.
The truss was brought to site as a completed and fully welded section, and lifted into place during one four-hour procedure.
“We used two 50t capacity mobile cranes in a tandem lift. As it was so big we had to employ traffic control measures to bring the truss close to the site and then lift it into place,” explains Mr Roberts.