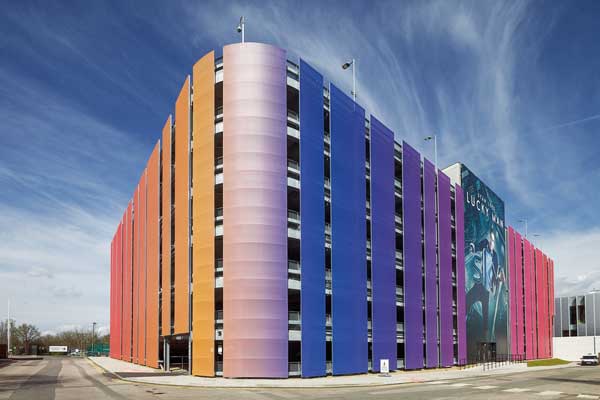 Steel construction’s speed of delivery has come to the fore as an 830-space multi-storey car park for media company Sky had its frame erected and flooring installed in just eight weeks.

Sky’s headquarters in Osterley, west London has undergone a major expansion with new offices and a new multi-storey car park both being constructed.

Bourne Parking was the main contractor and steelwork contractor for the car park.

“Normally the build programme would be much longer but the client wanted the car park as quickly as possible, so with four cranes working simultaneously for the steel erection we were able to achieve this fast programme,” explains Bourne Parking Senior Project Manager Greg Brown.

The car park measures 90m-long × 50m-wide and consists of seven levels, including ground floor and an open rooftop level.

The structure is a steel braced frame that supports precast flooring planks, with steelwork erected around a 7.5m × 16m grid pattern.

Prior to Bourne starting onsite, the plot for the car park had already been cleared with an old office block demolished under a separate contract.