Steel dives in for pool restoration

March 11, 2016 by NSC in Projects and Features, This month's featured stories 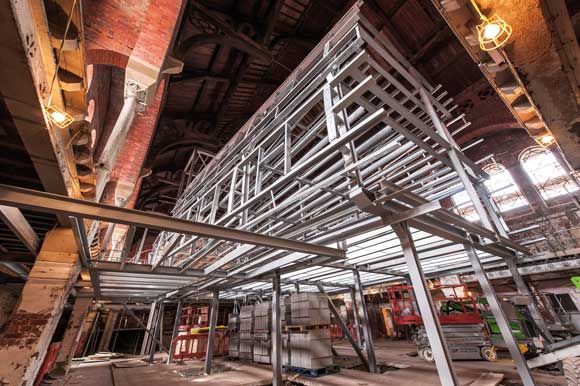 Akin to inserting a ship into a bottle, a steel-frame has been delivered through a narrow doorway piece-small and erected inside a renovated former Victorian swimming baths in Manchester.

Built of brick, with a wrought iron upper frame supporting a large vaulted timber roof, the building was a local landmark as its 36.5m-high tower, which housed the flues from the steam boilers and heaters, made it visible for miles around.

Unfortunately, for the last four decades the building has been empty, closing to the pubic in 1975 when a newer baths was opened nearby.

Allowed to deteriorate and plagued by vandalism, the building was sadly transformed from landmark to local eyesore until the Grade II listed building was bought by specialist developer PlaceFirst two years ago.

The company has recently completed a project that has brought new life back into the old building by creating a unique business space for local companies within the restored structure.

Restoration work on the building included extensive repairs and renovation to the exterior elevations as well as the timber roof. However, the most interesting aspect of the multi-million pound project was inside the structure where an office pod providing three levels of accommodation has been built. 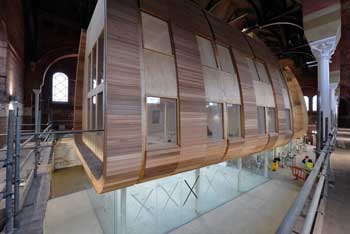 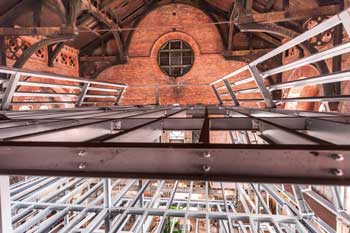 The upper level of the pod is an open terrace 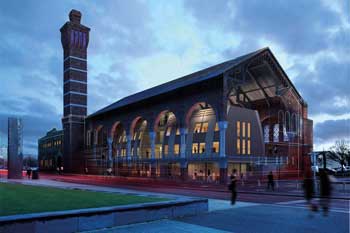 The restored building will be a local landmark once again

Constructing office space inside the Old Baths has been likened to inserting a ship into a bottle, as the listed building had to remain intact during the work, which meant all materials and machinery had to be delivered through a narrow doorway.

“Steel was chosen for this job primarily for cost, but also because it could be brought to site in small loads which would facilitate delivery through the narrow door, while lightweight slender members allowed the frame to be easily erected and not overload the foundations” says Renaissance Director Kevin Gilsenan.

The swimming pool had previously been concreted over and the free-standing steel-framed structure is founded on piled foundations, which had been installed through the infill to depth of 15m. A mini-piling rig had to be used for this work, as the machine also had to be fed through the narrow entrance.

“The steelwork was delivered to the main building on articulated lorries. It was offloaded with a tele-handler and then manoeuvred into the building to laydown areas,” explains B D Structures Managing Director Chris Heys. “The steelwork was then erected with a mini crane, with connection access mainly via electric scissor lifts.”

Because space was at a premium inside the building, the three-level high steel frame was erected from the furthest point away from the entrance first, so the erectors could work their way towards the entrance. The entire steel frame, including its lightweight plywood flooring, was completed in six weeks.

In order to aid the erection process and make the frame stable once the initial bay was erected it has been designed as a sway frame with moment connections.

“The position and shape of the pod will allow users to view the restored interior as the free-standing steel structure maintains the integrity of the old building as it does not connect or interfere with existing facades,” says PlaceFirst Architects Director Neil Brown.

The steel frame is built around a regular grid pattern of 3.2m × 6m, creating 600m² of office accommodation. There are two rows of internal columns, as long clear column-free spans would have meant heavier beams and the team needed to keep the frame as light as possible.

“We had to weigh up our options, clear spans or a light frame, and a light frame was more important,” says Mr Gilsenan. “We managed to use 152UCs throughout.”

However, flexibility has been built into the pod so that partitions can be added or taken out depending on the size of office each client requires.

Above ground floor, the two upper office floors are contained within a barrel-shaped structure formed by cantilevering facetted columns.

Some of the connections were quite a challenge to detail, particularly where the slim cranked columns and floor beams (152UC) intersected at floor levels.

“These were all moment connections and had very little space and depth to develop their forces. Added to this there were cladding rail connections, which were bracketed off the frame at varying angles,” adds Mr Heys.

Topping the three levels of office accommodation, the pod has an open terrace to be used for seminars or conferences, and offering the best views of the restored timber roof.

Access to all the levels within the pod is via a centrally positioned steel staircase, which when fully erected consisted of 5t of steelwork.

The project has achieved a BREEAM “Very Good’ rating and is due to open later this year. 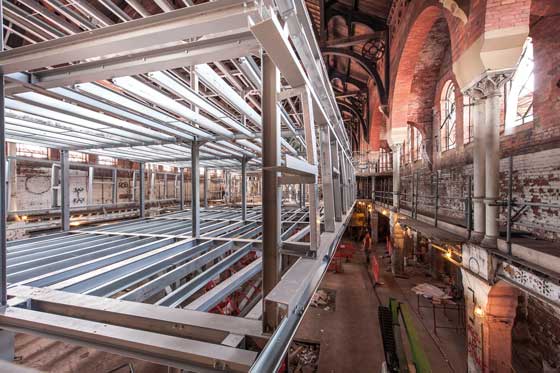 Full width version of the cover image from NSC March 2016.