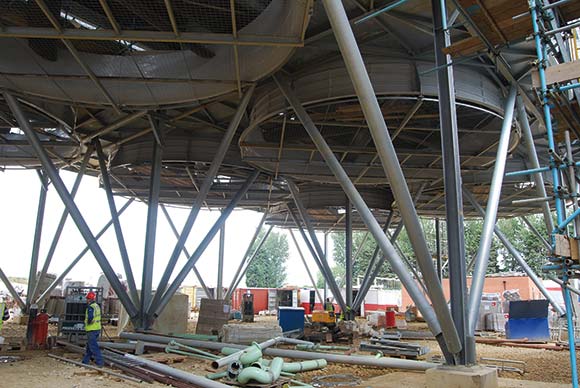 The second commercial straw burning power facility to be built in the UK has again relied on steel construction’s coordination and speed of delivery.

The latest project is a new 38MW renewable energy plant under construction near Sleaford, Lincolnshire. It will generate enough electricity to power 65,000 homes using straw and woodchip as a sustainable fuel source. It is claimed this will save 250,000t of carbon dioxide emissions per annum.

Owned by Eco2 Lincs, the plant is committed to supporting the local economy, as all of the straw will be sourced from farms within a 50-mile radius. Continuing its involvement with the agricultural sector, ash produced by the plant will be recycled into a crop fertiliser.

Caunton Engineering was responsible for fabrication, supply and erection of the steel structures as well as the design of the connections.

The steel framed buildings consist of two straw barns, a turbine hall, a boiler house, a flue gas area, a straw conveyor, a straw feeder, a workshop building with an office annexe. 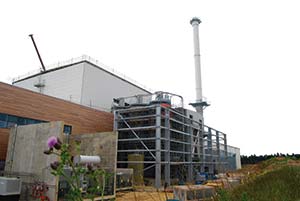 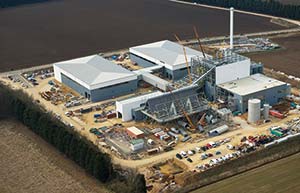 The energy centre takes shape in the Lincolnshire countryside 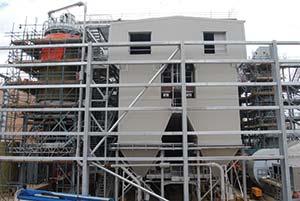 The boiler house was erected around the process equipment

The company has erected approximately 1,500t of hot rolled galvanized steel and a further 100t of cold rolled steelwork. Its scope of works has also included the supply and installation of more than 1km of hand railing along with numerous stair towers, staircases, ladders, platforms and metal flooring.

Work on the project began in early 2012. The erection of the ten main steel framed buildings commenced in July of last year.

Due to the high number of different trades working on the site, logistics and coordination have played a key role on this project. As well as the usual construction workers, there are a significant number of teams installing and comissioning the generation equipment to get the plant operational as soon as possible.

“Our steel erection programme lasted nearly 12 months,” explains Gary Hatton, Caunton Engineering Project Manager. “We had to coordinate all of our work around other trades, making several revisits and sometimes erecting our steelwork around installed energy generation equipment.”

Coordination of the steelwork with other activities has been a key driver for the project.

“Much of the project’s steelwork was designed to include temporary works, so that it could be erected around equipment installation,” explains John Whitfield, Ramboll Project Associate. “In some areas the steel frames were designed so that some parts could be left out to allow access for large pieces of equipment.”

The first steel buildings to be erected were the site’s two 0.75 acre straw barns. These two identical portal framed sheds are structurally independent but share the conveyor system that will feed straw to the boiler house.

The sheds will receive deliveries of straw bales, and are double span portals with 20m spans and a single line of internal columns – ideal for storage and vehicle movements.

“When we erected these two structures it was quite early in the overall construction programme and we had the area to ourselves,” says Mr Hatton. “Once they were finished we left site until most of the turbine and boiler equipment had been installed.”

The completed straw barns were then used as assembly areas for the plant’s boiler. Some parts of this structural frame had already been constructed, but one elevation and the roof were completed while the boiler was being commissioned.

Once this was complete it was transported across the site to its permanent position and the boiler house  steelwork erected around it.

The boiler house is a large 29m high braced structure, designed with a series of temporary wind girders positioned around the perimeter. These were only removed once the main boiler equipment was in place.

“Using steel allowed us to design frames that could be erected quickly and in conjunction with other trades,” says Mr Whitfield. “For efficiency, and to achieve the long spans in the boiler and turbine buildings, we also used cellular rafters.”

During subsequent visits, Caunton erected the other structures, including the conveyor system, which is an enclosed bridge formed with box sections and supported on 8m high steel columns. As well as connecting the two straw barns with the boiler house, it carries the conveyor system over passageways and a road.

One of the last buildings to be erected was the workshop and office annex. Constructed around a regular grid pattern, the building is a traditional beam and column design with a composite floor.  “This was one of the quickest structures to be erected, because like the straw barns, we had the site to ourselves,” says Mr Hatton.

Summing up, Stuart Campbell, North Midland Construction Business Development Director, says: “We’re delighted to be involved in such an innovative project that will have a positive impact not just on the environment but also on the local economy through the creation of jobs in the plant and through the supply chain.”