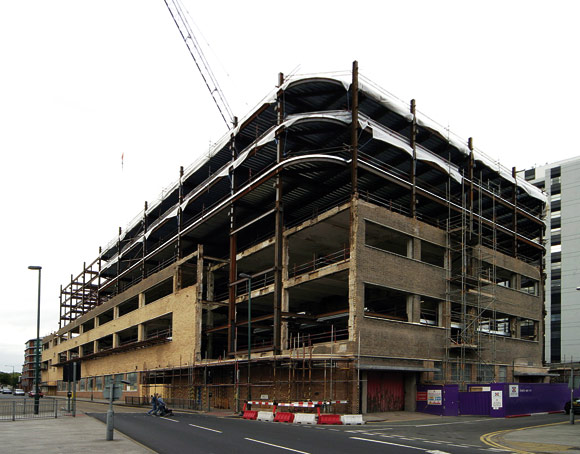 The second lift goes up above the concreted level six

A fashionable, modern apartment development has added a new lease of life to a stylish 1920s sorting office, as Margo Cole reports from Nottingham.

One of the most ambitious of these developments is Marco Island, a newly completed project that has created 10 storeys of apartments on a prime city centre site. The views from the roof – and the two penthouses above it – are spectacular, but the view is not the only aspect of Marco Island that sets this £20 million development apart from other new apartment blocks in the city. The 10 storeys of new apartments have been built directly on top of an old Post Office sorting office, built in the 1920s and used up until 10 years ago, when a modern facility was built next door.

The original structure consisted of three storeys above ground and one basement floor, with a later, single storey of offices added on the roof. Although obviously functional, the sorting office was an elegant, curved building, clad in brick and glass, that filled one entire block of Nottingham’s Huntingdon Street. 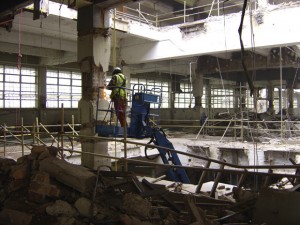 Preparing for construction of new mezzanine and stair core 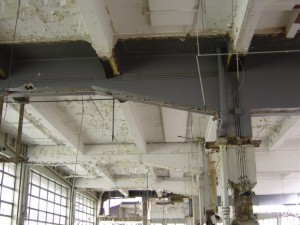 An original column is exposed at the new mezzanine level 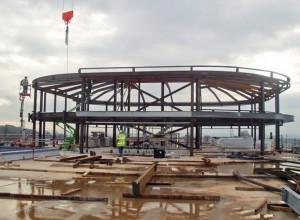 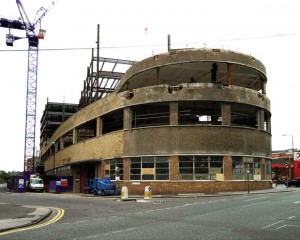 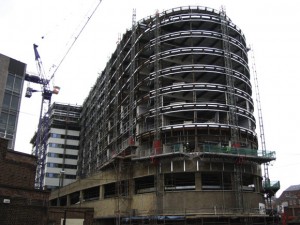 The north façade with most of the primary steelwork in place 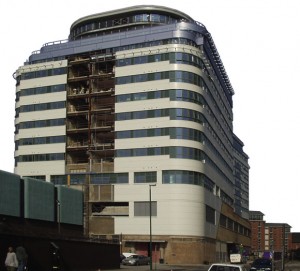 Post trucks loaded with mail were driven in at ground level through huge warehouse-style doors and their contents deposited ready for sorting on the floor above. To accommodate these activities, the ground floor had to be high and open enough to allow large vehicles to be driven in and out, while the first floor had to be strong enough for the heavy sorting machinery.

The structure was a steel frame consisting mainly of twin I-section beams, with additional steel plates up to 50mm thick riveted to the flanges to give extra strength. All the columns were encased in concrete for protection. The beams on the original grid were up to 25m in length, to facilitate the lorry movement and to span across the sorting equipment.

Since the Post Office vacated the building several developers came up with different proposals to convert it, and eventually shied away – perhaps worried that the original building might not be able to cope with the extra load. But local property developer Flambards, together with architect Franklin Ellis, structural engineer HSP Consulting, contractor Ashford Construction and steelwork contractor DA Green & Sons, have proven that it could be done.

“This is actually an incredibly robust building,” says Mike Baker, Project Engineer for HSP. “The beams in the sorting office were originally designed to take a live loading of about 10kN/m², and now the highest live load is 5kN/m² at the ground floor level.”

Ian Burchnall, Contracts Manager for DA Green, is also impressed by the original construction. “It’s really craftsmanship in steel,” he says. “It’s incredible when you compare the way this was built to the way we build now.” The original heavy riveted steel frame has more in common with traditional shipbuilding techniques than modern steel construction.

In the new design, the basement of the old building will eventually be converted into leisure facilities – including a pool – while the ground floor will house restuarants and bars. the two floors have been converted into car parking, with the new apartment block springing from what was the second floor.

The new building follows the curved shape of the original, although it steps back from the façade at third floor level for much of its area, and again near the top to give a hint of its main design reference – an elegant ship. Apartment space has been maximised by basing the design on a 9m x 12m grid. The apartments themselves measure 4.5m x 9m, with a 3m corridor between them.

To marry this new frame with the old steelwork, HSP designed new columns to be installed at basement, ground and first floor levels. At the locations of these new steel columns, steel web plates have been added to stiffen the existing beams to carry the loads through to the new columns. “Once we’d added the extra columns, the original frame was able to cater for the extra loading,” says Mr Baker.

The only area where significant strengthening was needed was the second floor level. This was originally designed just to carry the roof and, even though it was later found to be strong enough to take the loads from the office that was built on top, superimposed loads were still very low. For the original steelwork at this level to be able to support the 10 floors of apartments above, it had to be beefed up, as Mr Baker explains: “The columns here were much smaller I-sections with no added flange plates. We strengthened them by converting them from an I-section to a box section by welding plates across the flanges. That made them stronger in every direction.”

Before welding could start, HSP commissioned tests of the existing metal to ensure it would be compatible with modern welding materials.

As well as looking at the original building’ frame, HSP also investigated the foundations to make sure they could carry all the extra load. The sorting office was built on rock typical to the area – unweathered sandstone – which is traditionally assumed to have a bearing strength of 450kN/m². “Geotechnical reports suggest that it is probably at least 1000kN/m²,” says Mr Baker, “but the local authority told us that if we wanted to assume anything higher than 450kN/m² we would have to prove it.” The consultant complied by commissioning boreholes, and discovered that the actual value was nearer 1200kN/m².

When HSP was brought onto the project, it was also asked if it would be possible to create a mezzanine between the first and second floors, to provide two levels of car parking beneath the apartments. Although the original first floor storey height was a generous 5.8m, splitting it in two creates two floors with very low headroom. The only way HSP could make it work was by specifying the Slimdek® composite floor system, supplied by Corus. This consists of a hot rolled asymmetric beam and a deep deck, which bears onto the wider bottom flange. Concrete is then poured to create a floor slab, which is thinner than that normally achieved in ordinary composite construction. As the beam is encased up to 60 minutes fire resistance can be achieved without the need for additional fire protection.

The mezzanine floor is just 380mm thick, which gives a headroom of 2.3m between the floor and the underside of the original beams, spanning 12m across the car park. During construction of the new floor the main support beams were pre-cambered up to 50mm to take out dead load deflection as the slab was cast.

The columns on the two car park levels have all been protected by concrete blockwork. Mr Baker explains: “We couldn’t dry line them because of the problem of impact. And if they were painted you would be constantly repairing them all the time, so we went for blockwork, which provides impact protection as well as fire protection.”

To give the entire building stability, the new 10-storey extension has been designed as a braced frame, with diagonal steel plate bracing fixed within the new lift and stair cores and additional bracing between apartments. HSP decided that, instead of trying to prove the existing structure as a sway frame, the new bracing would continue down through the existing structure to the ground floor.

DA Green, which has a long, successful working relationship with main contractor Ashford, advised on sequencing at the start of the project, and integrated its work with the contractor to develop the most efficient method for erecting the new frame. “We built it up three floors at a time, splitting the building into two halves,” explains Ian Burchnall. “We used lightweight cherry pickers, which could reach three floors at a time, and worked out that, while we built half of the frame for three floors, they could net, deck and concrete the other three floors.”

He commends the commitment of his site erectors and welders saying: “It was an extremely complex job in challenging conditions.”

Many of the 350 apartments have already been sold and occupied, and Flambards intends operating the remainder as an “apart-hotel” of serviced apartments.  The client also plans to convert the ground and basement levels into conference facilities, swimming pool, bars and restaurant, adding to the buzz of this fast-growing quarter of Nottingham.