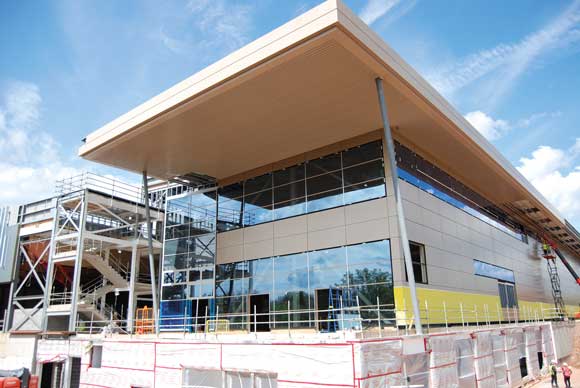 A covered terrace sits adjacent to the cafe

A value-engineered and highly efficient steel-framed sports hub will help the University of Warwick achieve its ambitious physical activity targets.

The project aligns with the University’s ambition to be the “most physically active campus community in the UK by 2020”.

Cost is always a major factor in any construction scheme and this project is no different. Early in the design phase, Willmott Dixon engaged with the steelwork contractor Hambleton Steel to help with a value engineering exercise.

“We changed all the floors to metal decking with the exception the wet changing rooms and areas near to the pool because of chlorine corrosion concerns,” says Willmott Dixon Construction Manager Nick Preedy.

“This meant we had to add extra beams to support the decking as it couldn’t span as far as the planks, but overall we used less steel tonnage as a lighter frame was needed, which ultimately saved the client money.” 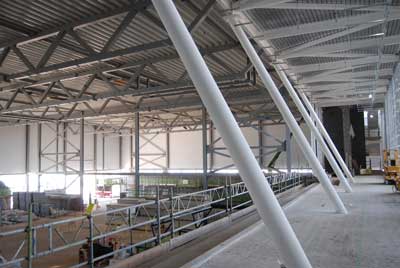 Another benefit resulting from this design change was a quicker steel erection programme. Including the metal decking installation and the remaining precast planks, the work was completed in 13 weeks instead of the previously estimated 18 weeks.

Overall the sports hub is one large steel frame, which gains its stability from strategically-placed cross bracing, and offers 14,000m² of floor space.

Two large open-plan areas dominate the building and are placed at either end of the 200m-long structure. At the northern end of the structure the 16-court sports hall is a large column-free space reaching the full-height of the building. The hall is formed with a series of 11 spliced 40m-long × 2m-deep trusses, which weighed 8t each.

The trusses are supported at one end by tubular raking columns that form the architectural feature façade for a viewing gallery.

“These raking columns are the middle portion of a longer spliced column,” explains Hambleton Steel Design Engineer Andrew Dobson. At basement level the column is a vertical UC section, it then changes to a raking section for the ground floor and then reverts back to a vertical member higher up.”

Another design innovation from Hambleton is a series of beams that cantilever out from the top of the sports hall’s roof and over the lower roof of the adjoining areas. Willmott Dixon supported the scaffold for the cladding installation on these sacrificial beams, which will be removed once the cladding is complete.

“This helped speed up the installation of the scaffolding as it would have ordinarily been supported from ground level. By using the beams the scaffold was erected more rapidly, which allowed us to get started on the cladding earlier, and meant we got the sports hall watertight earlier,” says Mr Preedy.

At the southern end of the hub there is an 8m-high swimming pool hall, which is another large open column-free space. This zone is formed by a series of 30m-long glulam beams supported on steel columns.

The columns in the pool area will be left exposed in the completed building, as will most of the sports hub’s steel frame. To this end, all of the project’s steelwork has been painted with a high-spec protective coating to prevent any corrosion from the potentially humid and chlorinated conditions.

The sports hub’s other facilities occupy the large area between these two column-free zones, as well as running along the entire eastern elevation. In these parts, the hub has three floors, a basement – mainly accommodating changing rooms and offices, a ground floor with the main entrance, climbing wall and squash courts, wet changing facilities and a café, and a first floor containing a 330-station gym and multi-purpose studios.

As well as internal exposed steelwork, some of the hub’s exterior steel will also be remain visible as architectural features.

Adjacent to the pool hall a large cantilevering canopy, partially supported by raking CHS columns, creates an outdoor terrace for the hub’s café.

At the opposite end of the hub, a similar canopy forms the roof for the facility’s main entrance, again supported by raking columns.

These raking 273mm-diameter columns also extend along the exterior of the eastern elevation, joining the two canopies with a series of large Ws, which obviously stand for Warwick.

Most of these raking columns are not structural, but purely architectural. They are attached to the elevation’s cantilevering roof and will be installed once the cladding is complete.

Summing up, Willmott Dixon Managing Director in the Midlands Peter Owen says: “This is a fantastic project to be part of, creating cutting edge sporting facilities for the community at University of Warwick, which will really benefit its users.”