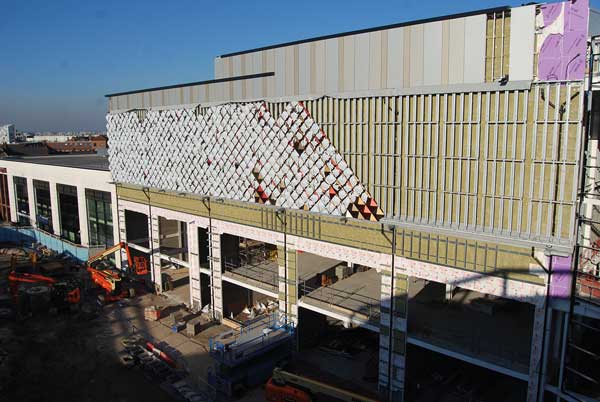 More than 3,000t of structural steelwork, amounting to 6,500 individual pieces, has been erected by James Killelea at the Warrington Time Square project.

The mixed-use scheme is set to transform a large part of Warrington town centre when it opens in early 2020.

The new buildings will all be set around a large public square, while along the adjacent Bridge Street, the scheme’s Market Hall incorporates a Grade II listed former Boots building façade.

Main contractor Vinci Construction started on site in September 2017, after a major demolition phase had been completed. The company remediated the entire site’s footprint prior to the steelwork package starting.

According to Vinci, the project team chose a steel framing solution for the whole scheme because of the material’s speed and ease of construction.

The cinema block has a complex design that incorporates two distinct grid patterns, one for the retail zones and the other for the cinema screens. A series of transfer structures, supporting the upper levels, allow the column positions to change.

Vinci says this structure could only have been built using steelwork, while the office block and market hall, both make use of long clear spans, which is another design aspect best suited to steel construction.