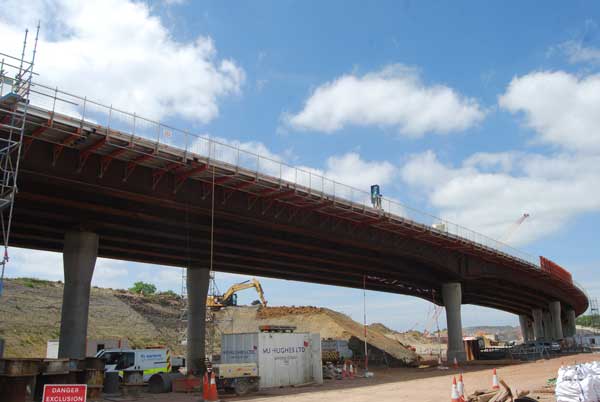 Improvements to the Catthorpe Interchange (M1 Junction 19) are progressing on schedule with the entire £186M scheme due to be completed by Autumn 2016.

More than 150,000 vehicles currently use the interchange every day as it forms an important link between the M1, M6 and A14 routes.

In order to improve congestion and safety, traffic will be diverted away from an out-dated and inadequate roundabout beneath Junction 19 of the M1 with the creation of a new three-level junction.

Working on behalf of main contractor Skanska, four new steel bridges, requiring more than 4,000t of steel, are being erected by Mabey Bridge as part of the scheme.

The longest of the bridges is 248m and this structure will carry traffic from the M6 to the M1 southbound. A total of 17 lifts, each one involving a pair of braced girders, were needed to complete this structure.