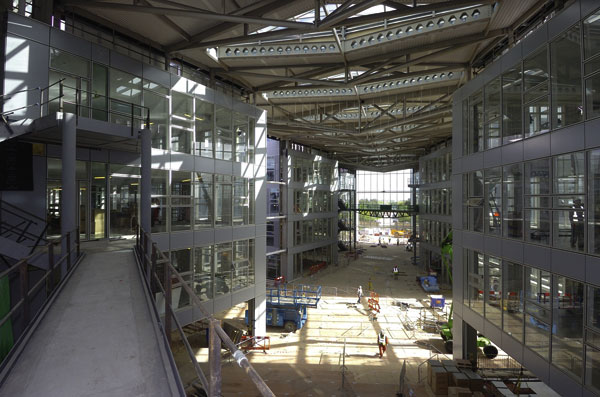 A new national centre for Network Rail is quickly taking shape in the centre of Milton Keynes. Being built on the site of the former National Hockey Stadium, The Quadrant:MK, will bring together nearly 3,000 employees, from across the UK, when it opens next year.

The project consists of four individual blocks offering a total of 36,500m² of office space. Each of the blocks has four levels and they are all linked together by a large steel formed central atrium or street.

A series of steel trusses, which vary in length depending on their location, span this central atrium and will support a glass roof.

Steelwork contractor Graham Wood Structural brought the trusses to site in two pieces. They were assembled on the ground and lifted into place by a 200t capacity mobile crane. “The heaviest trusses weighed 8.5t and we used a large mobile primarily for its reach, as it had to be positioned outside of the atrium’s footprint,” said Adam Harding, BAM Construction Project Manager.

The prefabricated trusses have welded connections and were fabricated from hollow and universal column sections. Spanning between these primary trusses are a series of secondary trusses, all connected to form the overall volumetric shape.

Each of the four office blocks has two further internal atria, an inner and outer void, with the inner linking directly into the main central atrium. As well as allowing natural light to penetrate the inner office spaces, these atria also act as large chimneys, by helping to draw warm air out of the structures.

At roof level, each of the office block’s atriums has a roof, spanned with 15m-long steel beams which will support an aluminium standing seam. Steelwork also forms external plant areas at roof level.