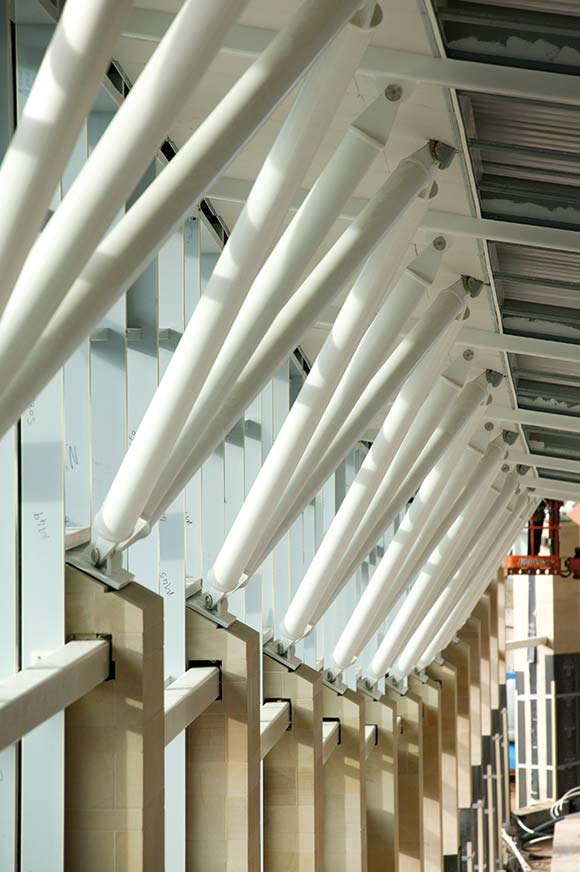 The former Nottinghamshire mining town of Mansfield has some big regeneration plans in the offing. An integral part of the overall plan is the construction of a new bus station, a facility which will have a footbridge link to the adjacent railway station, thereby forming a public transport interchange.

The steel framed bus station is one of the new breed of transport facilities, a million miles away in design terms from the bus garages of the past. Little or no architectural merit could be attached to many of these old structures, which were generally just large sheds, but today this is far from the case.

“We wanted an airport style, quality structure,” explains Paul Horn, Nottinghamshire County Council Lead Officer on the scheme. “The design of the bus station is also open, secure and comfortable, to encourage people to use it.”

With a clear set of ideas in place the Council needed to choose which materials to use for the structure. A number of options were looked at, including timber for the columns, but steel won the day primarily on a cost basis.

A series of columns are located around the perimeter of the ‘Pringle’ shaped structure to support the roof. The columns vary in height (the tallest is 8m) as the roof curves and slopes in three directions.

On top of each column there are six tubular branches and these are connected to the feature roof. Again, to take into account the changing geometry of the roof, each one of the 250 branches is completely bespoke.

“Each column’s cap plate is individual because of the unique lug positioning for the branches,” explains Adrian Downing, Caunton Engineering Project Manager. “The branches are set at different angles and have varying lengths.” 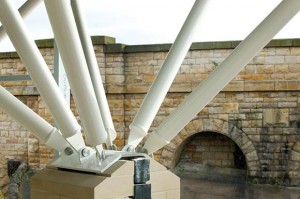 The column trees are exposed and have stainless steel pin connections

“The columns have been designed to resemble nearby Sherwood Forest, that’s why we initially looked at timber,” explains Peter Johnson Marshall, Nottinghamshire County Council Project Architect, who designed the scheme before retiring. “Steel is very adaptable and was more readily available. The project has a timber design which has been easily adapted for steel.”

Erecting the tree columns was a time consuming exercise. Each rafter had to be temporarily propped, while each branch was attached to the upright member and the roof structure above.

Only when a phased grid of columns and rafters were up and stability achieved, could the props be taken down and then reused later in the erection sequence.

The columns are one of the main feature elements and below the branch connection they are clad in locally sourced peak district stone. “Steel and the high quality stonework work well together to create a stunning station,” adds Mr Horn.

The branches themselves are left exposed, and consequently eye catching and aesthetic stainless steel pin connections have been used on either end of the branch members. 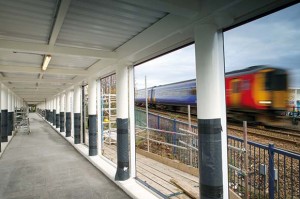 The footbridge connects directly to the railway station

The bridge has been designed by Nottinghamshire County Council highway structural engineers and fabricated as a large Vierendeel box girder, 3m high and 3m wide with an overall length of 73m.

The box girder was fabricated in four sections consisting of CHS verticals with square hollow sections forming the roof and floor. The bridge sections were painted and had metal decking installed prior to going to site, all of which speeded up the construction sequence, as less work was required after the lifting had been completed.

The bridge is connected to and supported by the bus station’s steelwork at one end and an abutment adjoining the railway station platform at the other, while two piers provide support along its length.

“Although the shape of the building is primarily dictated by the site,” sums up Mr Marshall. “The curving roof was designed to accommodate the need for a higher elevation on one side for the bus stands, and a sloping end façade to accommodate the footbridge link.”

The bus station is due to open this spring.

Lifting a link into place 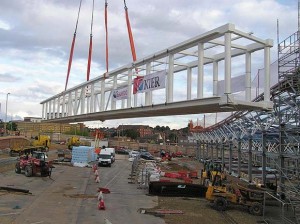 The 73m long steel footbridge links Mansfield bus station directly to the railway station. Installing this important part of the project was one of the most challenging aspects of the entire job.

Because of the bridge’s length it was delivered to site in four sections. These were then assembled and bolted into two larger 30t sections, in readiness for the lifting operation.

The close proximity of the link bridge to the existing railway line and a viaduct meant the operation had to be carried out at night under a Network Rail possession.

The site team assembled at 10pm and, after an induction and briefing, began setting up the 350t mobile crane that would be used to lift the two halves of the bridge into place. Lifting began just after 1am and after some initial repositioning of lifting gear, the first section of the bridge was craned into position without any problems.

“Due to its position between the first section of bridge and the new bus station, both now being fixed points, lifting the second half into place was always going to be the most challenging aspect of the operation – the team had to get it right first time. But the meticulous preparation and expertise of the team paid dividends and the second piece was lifted into place with perfect precision,” says Paul Williamson, Kier Project Manager.