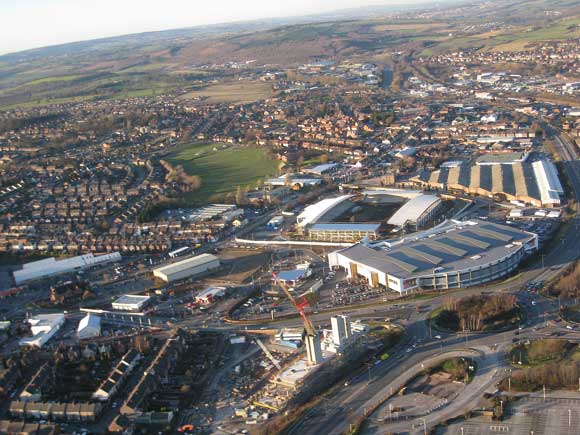 A former glassworks site in Chesterfield is the main focus for a large regeneration scheme which has a new football stadium as its centrepiece.

Chesterfield is the latest Football League club to invest in a new all-seater stadium to replace an outdated Victorian era ground. The club, nicknamed The Spireites, has played at its current Saltergate home since the 1870s and although the stadium has been modified over the years, it is deemed woefully inadequate for today’s higher profile game.

Currently under construction and scheduled for completion in time for the 2010/11 season, the new B2net Stadium will have a 10,338-seat capacity along with a host of other facilities associated with a modern sporting arena.

The site, previously occupied by the Dema Glass factory which closed down in 2001, forms part of Chesterfield’s A61 Corridor regeneration programme. Also on the site is a  new 12,700m2 Tesco superstore which opened last year and a host of small mixed-use business units, all of which are providing a significant boost to the local economy.

The B2net Stadium is being built by GB Building Solutions, with the project’s structural steelwork and precast terracing supplied and erected by Robinson.

The stadium’s four structurally independent stands are all single tier and have been formed with steel rakers and columns supporting precast terracing units, while the roofs are formed by a series of 15m-long cantilevered Westok rafters.

“This is generally the way modern stadiums are built today,” says Paul Jones, Opus International Project Engineer. “Steel lends itself to a more economical solution as well as a quicker construction programme.” 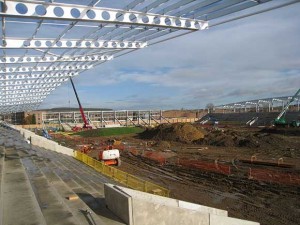 The stadium’s Main or West Stand incorporates conference facilities and banqueting rooms, and to accommodate this Robinson has erected a traditional two-storey column and beam composite area behind the stand’s terracing.

Erected around a 7.5m x 7.5m grid pattern, the ground floor will house concourses, bars, ticketing and administrative offices, as well as home and away team facilities. Above this on the first floor level there was a need for larger column free space – for the conference room and hospitality suites – so a central column line has been omitted giving the area 14m clear spans.

On the opposite side of the stadium, the East Stand has a similar two-storey structure behind its terracing and this will house a multi-purpose sports and community room, sports injury clinic, meeting rooms as well as a classroom resource centre for local education.

The steel cantilevered roofs over these two stands are curved, and this has been formed by erecting each cantilvered Westok beam incrementally higher than the previous member. This process was repeated until a central point on the roof was reached, whereby the sequence was reversed all the way down to the other end of the structure.

Behind both of the goals, the North and South stands consist solely of terracing with ground level concourses and vomitories leading into the seating areas. The cantilevered roofs over these two structures have been erected without the curved profile.

Rob McGann, Robinson Contracts Manager says: “We’ve erected 730t of structural steelwork on this project which included metal decking to the back of house areas, terrace rakers and the beams to form the stand’s roofs. Our contract, which also included installing the precast terrace units, was completed within the agreed 12 week programme.” 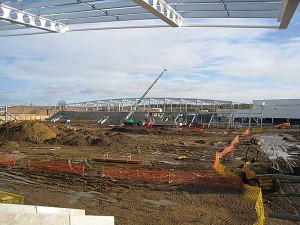 Prior to the steelwork commencing, towards the back end of last year, main contractor GB Building Solutions had to undertake a thorough site remediation of this brownfield site. After a cement stabilisation programme pad foundations were installed to accept the structural steelwork.

Despite the recent harsh winter conditions John Currie, GB Building Solutions Project Manager, says good progress was made by the entire team during January and the structural steelwork and precast terraces were completed on time. “This eliminated a good proportion of the delivery vehicles coming on site.”

Another important milestone was reached during February as the four corner floodlights were erected.

Externally the stadium’s elevations will feature a mixture of masonry, cladding and large glazed areas, while the roofs will have a standing seam metal profile. The exception to this will be the West Stand, which will have a clear transparent polycarbonite section to its roof to allow natural daylight to shine directly onto the pitch.

Summing up Mr Currie says: “In early March work will start in earnest on the pitch and this process will run right through until July in preparation for the club’s first game in its new stadium.” 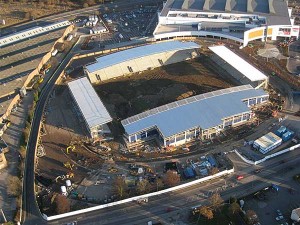 Chesterfield’s B2net Stadium could be used as a training base for one of the World Cup teams if England’s bid to stage the 2018 tournament is successful.

The stadium is part of Sheffield’s successful bid to be one of the 12 host cities, and a country drawn to play at the Hillsborough Stadium will be assigned a local training venue, one of which is Chesterfield’s B2net.

Chesterfield FC Chairman Barrie Hubbard says: “We were part of Sheffield and Derby’s bid to be host cities. Derby missed out but Sheffield is still in the running and if FIFA decides later this year that the 2018 World Cup is to be held in England, our stadium could be a training venue.”