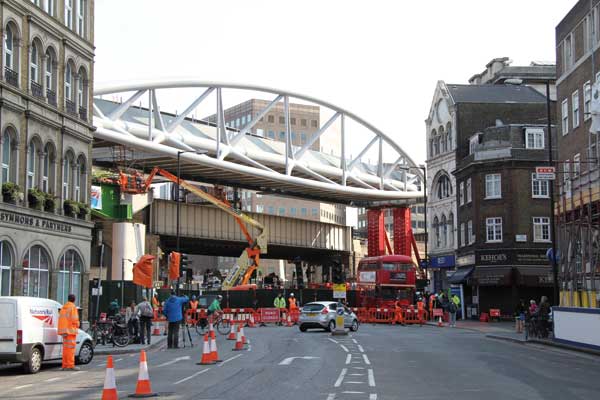 Substantial additional rail capacity is accommodated on the Borough High Street Bridge, a structure that had to be pre-assembled and then launched over a busy London market and streets.

Forming an integral part of the Thameslink project, an initiative which will expand the existing rail network in London and the south east, the new Borough High Street Bridge allows a notorious bottleneck to be expanded from two tracks to four.

The project is located above the busy Borough Market, close to London Bridge Station, and consists of three main steelwork parts: a 128m long western approach viaduct, a 50m long viaduct to the east and the main 70m long Borough High Street Bridge.

Incorporating 850t of structural steelwork the main bridge has a trapezoidal girder construction from large diameter tubes with tapering ends.

The north elevation of the bridge is largely obscured due to its closeness to an existing railway bridge; therefore the girder on this elevation is a simple 6m deep economic plate girder.

The main tubes are up to 1,200mm diameter with 50mm wall thickness, and due to their size many of the major joints had to be butt welded on site.

“The client wanted an aesthetic looking structure and also one that incorporated a tubular truss, which was one of the main reasons for choosing steel,” explains Mike Richardson, Atkins Project Engineer. 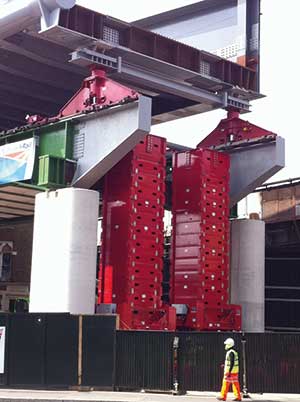 The bottom chords have significant torsional stiffness, ensuring continuity between the cross girders and the internal tubular steel members of the truss.

The entire girder was first assembled in Watson Steel Structures’ fabrication workshop to ensure an exact fit, before being dismantled and sent to site in sections weighing up to 65t each.

Mr Richardson says the main highlight of the project was the installation of the bridge. “Because of the confined nature of the site, the only way to install the bridge was to assemble offsite and then launch it into position, something that was easier to do with a lightweight steel structure.”

The programme required the western approach viaduct to be completed first and this was then used as a working platform for the assembly of the main bridge.

Extensive temporary supports were required for this procedure as the bridge is up to 3m wider than the viaduct on which it was assembled.

“To recreate factory conditions for welding and painting we constructed a temporary tunnel. As each third of the bridge was assembled it was pushed through this structure which sheltered the joint for our high spec works,” says Paul Hulme, Watson Steel Structures Project Manager.

Over the Bank Holiday weekend in April 2011, the bridge was launched across Borough High Street at a speed of a few centimetres a minute and was then lowered down onto the bearings.

The technique of launching the main span from the viaduct itself was inspired, say the judges.