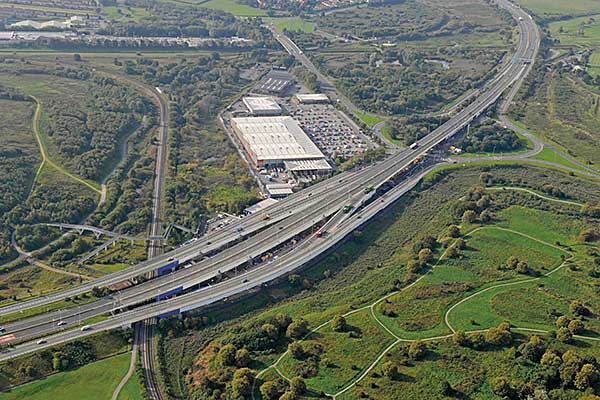 Fully restoring a vital road link and undertaking extensive welding inside confined spaces, with minimal disruption to traffic, were all safely achieved on this bridge project.

The 730m long Bidston Moss Viaduct is a multi span box girder structure that connects the M53 to the River Mersey’s Kingsway Tunnel, carrying 63,000 vehicles a day on this strategic route into Liverpool.

A recently completed strengthening programme has now fully restored the structure, allowing load restrictions (HGVs were not allowed on the outside lanes) which had been imposed during the last ten years to be lifted.

Previous strengthening works on the bridge, which was originally built in the late 1970s, uncovered some structural deficiencies, problems which had resulted in restrictions being imposed and partial closure was imminent. 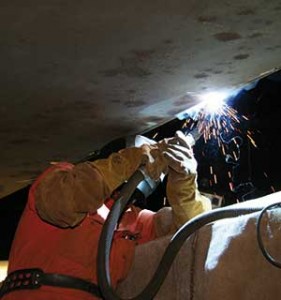 “The completed project was vital as the whole bridge would have had to be closed to HGVs which would have put an enormous strain on other roads and had a serious knock-on effect to the local economy,” says Graham Dakin, Highways Agency Project Manager.

Keeping traffic disruption to a minimum was also seen as vital, and this was achieved as the majority of the steel strengthening works, all undertaken by Cleveland Bridge, were executed inside the structure’s box girders. To protect the road user, workforce and the environment, the 3.7km of box girder was housed within a bespoke scaffold containment.
Steel was chosen as it is compatible with the existing structure. The material also allowed significant flexibility in design and construction, as well as reducing future maintenance costs.

To install more than 565t of steel, 26,200m of finished weld was completed using highly specialised labour, varying between one and 14 runs over a distance of 100km.

“The majority of the work was carried out in a confined space, whereby much of the strengthening was done by welding new steelwork to the existing steel,” explains Darren Bearwish, Amey Project Engineer. “Through value engineering we developed hybrid solutions and bolted alternative solutions which were utilised in certain areas,”

In order to create a safer working environment and lessen any problems that may have arisen from the existing bridge’s superstructure, a staged sequence was used, minimising potential weakening due to drilling, cutting or applying heat.
Mr Bearwish adds that working as an integrated team reduced the number of solutions needed to achieve the required strength. “Having the whole team, including the steelwork contractor, on board helped the project meet its deadline, which also included repainting, drainage renewal and other highway works.”

Summing up, the judges say a shipbuilder executed the original bridge structure, and this is the third exercise to strengthen it to current standards. The work of the designer and steelwork contractor has been outstanding in investigating, analysing and executing the strengthening throughout the 3km length.