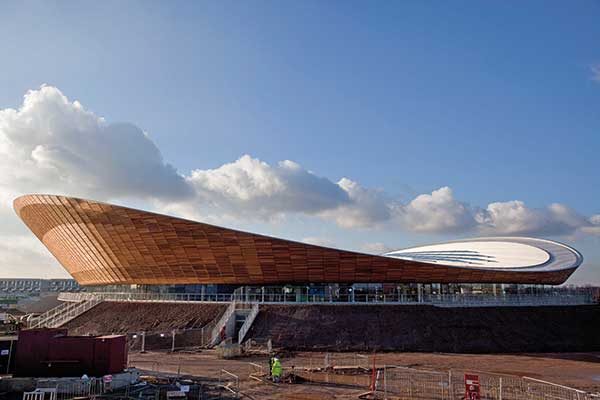 The Velodrome is an iconic world class sporting venue, which will endure in its community legacy use in the VeloPark.

The 6,000 seat London 2012 Velodrome will serve as an Olympic and Paralympic stadium for track cycling. It has already been described as a world class venue that has intelligently answered questions of function, beauty, sustainability, buildability and value.

On track for a BREEAM ‘Excellent’ rating, the Velodrome boasts a number of impressive statistics: 29% recycled content in the building, natural ventilation, exceeding Part L (2006) by 30% and extensive use of natural daylighting. The structural system is said to be so efficient that the steel cable net roof is approximately 35% lighter than the roof of the next best comparable venue in the world. 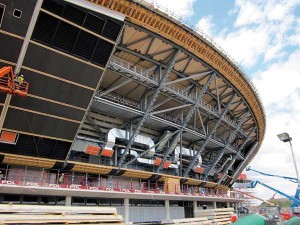 “The Velodrome is 50% lighter than Beijing’s. By using the materials we’ve chosen for the roof we have produced a lightweight, efficient and sustainable landmark,” says Richard Arnold, Olympic Delivery Authority Project Sponsor.

The upper tier of the Velodrome is formed by 48 inclined steel trusses (varying in size from 2m high to 16m high) connected to concrete piers. The lower parts of the truss form the steel rakers supporting the upper tier’s precast terrace units. Because of the shape of the roof structure (described as Pringle shaped), the Velodrome has two upper seating areas positioned on either side of the track and suspended within the two curves of the roof.

A tubular plane truss sits on top of the steel trusses and goes around the entire perimeter of the structure, in a rollercoaster fashion, supporting and helping to form the distinctive double curved roof. The ring beam rises in height by 12m from the shallowest point to the highest part.

Approximately 2,500 sections of steel were installed by Watson Steel Structures to complete the steel programme on the Velodrome. Much of the steelwork was pre-assembled into bays, and once erected only the steel bracing needed to be added. 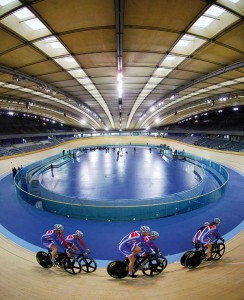 The ring beam is formed from two CHS columns connected by tubular bracing and was assembled into 8m long sections prior to being erected. Watson Steel began its erection of the ring beam on the eastern end of the venue (one of the two low points of the curved roof) and worked its way around the entire circumference.

“We were dealing with some extremely tight tolerances to ensure the correct geometry of the cable network was maintained,” says Peter Barlow, Watson Steel Structures Project Designer. “Due to the magnitude of the forces within the bowl steelwork, huge bolted connections were developed utilising tension control bolts to ensure there was no slippage within the joints.”

The cable net is connected to the ring beam at 3.6m centres and the steel ring beam acts as a circular compression member. “About 25% of the loads from the roof are absorbed by the ring, while the remainder are transferred down to the foundations via the steelwork and concrete directly below,” explains Andrew Weir, Expedition Engineering Project Manager.

The capabilities and versatility of steelwork have been used well in this fine building, say the judges in summary.